The all-new 2017 Cadillac XT5 will arrive at dealers in the U.S. and China next spring. Image source: General Motors.

General Motors (NYSE:GM) took the wraps off the all-new 2017 Cadillac XT5 this week. The XT5, which will replace the still-popular midsize Cadillac SRX crossover, is the first of four all-new Cadillac crossover SUVs expected in the next few years.

About the XT5: The XT5 is an all-new five-passenger luxury crossover. Following the trend of other recent new GM products, it's lighter (by 278 pounds), roomier, and nicer inside than the model it replaces.

U.S. models will be powered by the new 3.6 liter V6 that was introduced on Cadillac's ATS and XTS sedans earlier this year. A 2.0 liter four-cylinder turbo engine will be standard on XT5s in China, where bigger engines are more heavily taxed. Both will come with the new GM-designed 8-speed automatic transmission. And all versions of the XT5 feature a new interior that has been significantly upgraded.

Like other recent Cadillacs, the XT5's interior is a no-excuses premium space, swathed in high-quality wood and leather. Image source: General Motors.

Why the XT5 is important: GM has made it clear that it has big ambitions for its Cadillac brand. Simply put, it wants to match or beat the three big German luxury brands at their own game, at least in the most profitable segments of the luxury-vehicle market. This is an important part of CEO Mary Barra's plan to increase GM's global operating margin to between 9% and 10% by early next decade.

Cadillac President Johan de Nysschen has made it clear that the revamp of Cadillac will be a slow process, unfolding over several years. So it's early days yet, but so far, results have been mixed: The newest products, the Cadillac ATS and CTS sedans and the big Escalade SUV, have all received good reviews. But the brand's overall sales have been disappointing this year.

De Nysschen and other GM executives have said that the problem is simple: Cadillac needs more crossovers. Crossover SUVs are driving much of the growth in luxury right now, and Cadillac doesn't have the vehicles to compete yet. Sales of BMW's (OTC:BAMXF) X5 were up 20% last quarter, helping the brand to an overall 7.1% gain even as sedan sales lagged. 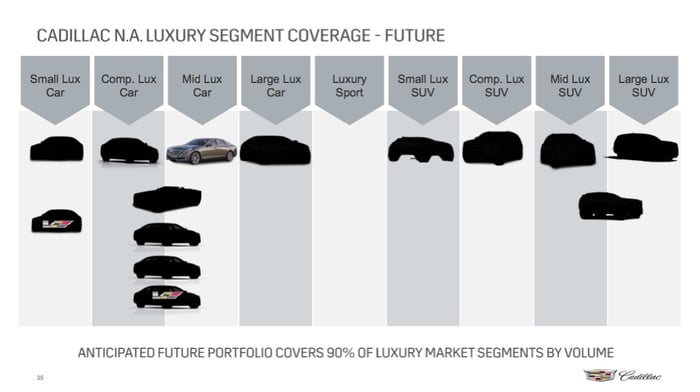 Cadillac's future-product plan, shown in this slide from a presentation by de Nysschen earlier this year, includes five luxury SUVs: Four crossovers, plus the Escalade. The XT5 is the first of those four new Cadillac crossovers. Image source: General Motors.

Those crossovers are coming. The XT5 is the first of four new Cadillac crossovers expected by the end of the decade. They're urgently needed: Right now, Cadillac has just one crossover, the SRX. It has sold surprisingly well recently (U.S. sales are up 25% this year), but it dates to 2010 and it's due for replacement.

Long story short: The XT5 should help give Cadillac's U.S. (and China) sales a boost, but the more dramatic sales boosts will come as Cadillac adds additional crossover models over the next few years.

What happens next: The XT5 will go into production in the U.S. and in China next spring, and should arrive at dealers (as a 2017 model) before summer. It should give Cadillac an incremental boost, but the real test won't come until the brand's other crossovers hit the market, a few years from now.