A lot has been made about Kinder Morgan Inc's (NYSE:KMI) ability to maintain its planned dividend growth trajectory amid the slump in commodity prices. That's because the company has some exposure to prices. As such, it might struggle to hit its dividend growth targets if it's solely dependent on its current asset base and project backlog.

This is one reason why the company recently reduced growth expectations, and now sees its dividend growing by 6% to 10% next year instead of the 10% annual rate though 2020 it had initially projected. In order to fuel top-end growth, the company might need to make some acquisitions to offset the impact of weaker commodity prices.

Looking at both sides of the equation
Kinder Morgan's project backlog currently stands at $21.3 billion to be invested during the next five years. That backlog is expected to do the bulk of the heavy lifting to drive dividend growth. Investors have realized that the backlog isn't quite as secure as hoped, with billions of dollars of projects being pulled out of its Carbon Dioxide segment due to weak oil prices.

Further, some of its other projects, namely the Trans Mountain oil sands pipeline expansion project in Canada, have come under pressure from environmentalists who don't want to see this pipeline built. This is causing a delay and could hamper dividend growth in the years ahead.

As important as its backlog is to the company, organic growth has only been half of what has driven growth for the company during the years. We see this on the following slide, which notes that acquisitions actually represent a higher portion of its invested capital since inception. 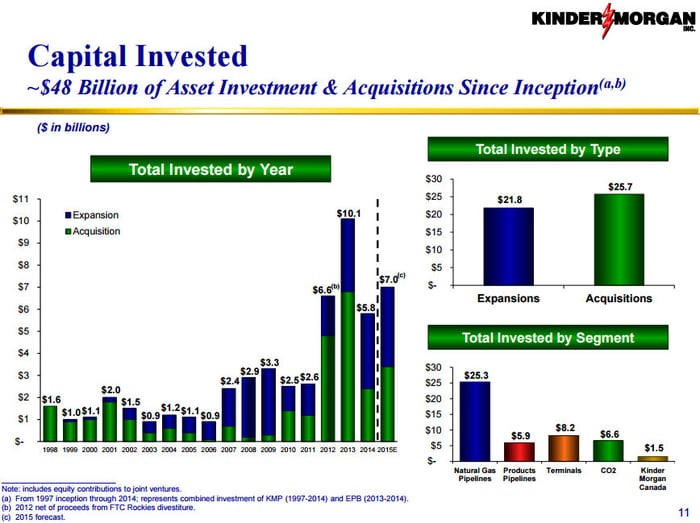 Suffice it to say, Kinder Morgan will likely use acquisitions to drive growth in the years ahead. That's especially true when we consider that there have been some new developments recently that could lead to more assets being put up for sale.

One deal that makes sense
One of the new developments to keep an eye on is the fact that Brookfield Infrastructure Partners (NYSE:BIP) is currently reviewing strategic options for its stake in the Natural Gas Pipeline Company of America, or NGPL, and might put it up for sale. That's worth noting because Kinder Morgan owns a 20% stake in NGPL, and is the operator of the system.

Brookfield CEO Sam Pollock had this to say about the process: "We also initiated a strategic review of our natural gas pipeline business, NGPL, and I'll say, from an operating perspective, we're pleased that that business has started to turn the corner and we're seeing some positive green shoots, from an earnings perspective, and hopefully later this year, probably later in the fourth quarter, we'll be able to disclose the results of that strategic review."

Owning the rest of NGPL would make a lot of strategic sense for Kinder Morgan. First of all, the fact that it already operates the company suggests some potential synergies from gaining total control in order to maximize its operations. Not only that, but this is a key natural gas pipeline asset that's finally performing up to its expectations, suggesting strong cash flow potential, which is important to supporting a dividend. Further, it certainly fits within Kinder Morgan's focus on owning natural gas pipelines, and this is more of a demand-driven pipeline, meaning it potentially benefits from lower natural gas prices due to increased demand, which is a key megatrend.

Investor takeaway
Acquisitions could be what fuels Kinder Morgan's dividend growth rate to the top-end of its projected range. While it likely will have a number of acquisition opportunities, buying the rest of NGPL is a deal to watch because it makes a lot of strategic sense. What's special about that pipeline is the fact that it's a demand-driven natural gas pipeline with improving cash flow, which is what the company really needs right now.