The third quarter was a tough one for oil producers after the price of crude slumped more than 20%. This forced oil companies such as Anadarko Petroleum (NYSE:APC) to really focus on the things they can control. That idea was the central theme of CEO Al Walker's prepared remarks on Anadarko's third-quarter conference call, where he specifically addressed five areas of focus for the company.

1. We're focused on value over growth

Walker led off his prepared comments on the call by saying, "As we've said throughout the year, in this period of lower commodity prices, our focus is on building and preserving value rather than on growth." Because of this the company has really pulled back the reins on capex spending, especially short-term growth from shale plays. Having said that, the company hasn't given up on shale, but instead is focused on reducing its drilling costs so that it can maintain its current production level at a reasonable price. This focus is really paying off, with the company slashing $4 million off its well costs in the Permian Basin, for example, with the potential to reduce those costs by another $2 million. These cost reductions will enable the company to continue to create value on the wells that it does drill, while it will accelerate value creation when the market needs oil and is again rewarding oil companies that grow production.

2. We're focused on improving our margins
In addition to focusing on creating value by improving its drilling costs, the company is also focused on extracting more value out of current wells by lowering its production costs. Walker noted: "We're enhancing our wellhead margins by reducing costs and improving operating efficiencies...we're also making permanent process enhancements and optimizing our operations in a manner that is sustainable over the longer term."

Margins are more important to oil companies than a particular oil price. That's why we're seeing Anadarko focus on making improvements to its operations so that it can capture a higher margin on each barrel it produces, which will improve its cash flow even if oil prices don't improve.

3. We're focused on being financially disciplined
A major outcome of Anadarko's focus on value and margins is that it makes the company more financially disciplined. Walker noted, "We're continuing to demonstrate our commitment to financial discipline by lowering the high end of our 2015 capital guidance by an additional $100 million." While some of its peers would have reinvested that $100 million into additional wells, Anadarko is maintaining its discipline by holding on to that cash and preserving the value of its acreage position for a later date.

4. We're more focused on the long-term
Another big focus of Anadarko is its decision to invest in longer-term projects instead of the shorter cycle growth found in shale. Walker noted:

Given the challenging supply and demand fundamentals and continued uncertainty around sustainably higher oil prices, you can expect us to see continued investment in higher-percentage longer-cycle opportunities, such as exploration. ... Consistent with our 2015 approach to capital allocation, we'll continue to invest fewer dollars in short-cycle U.S. onshore activities. This approach reflects our conviction that growth will not be rewarded in this environment and focusing on preserving and building value is more appropriate at this time.

What's really interesting about this approach is that it's the polar opposite of that taken by most of its peers. For example, ConocoPhillips (NYSE:COP) is focusing most of its attention on short-cycle growth because the returns are much better. We see this in the following chart. 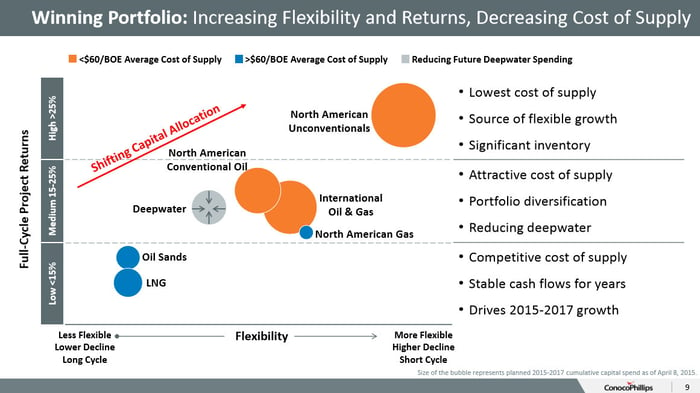 5. We'll be focused on growth when the time is right
Walker ended his prepared comments by saying, "And when we see value in pursuing growth, we'll be prepared to accelerate activity." Walker made it clear that Anadarko is still a growth company, but not a growth-at-all-costs company. When growth is being rewarded, Anadarko stands ready to accelerate its drilling and capture that value.

Investor takeaway
In a sense, Anadarko would rather simply tread water now rather than sink more money into growth at a time when the market doesn't need any more oil. Instead, it is focusing on improving its drilling costs, its margins, and its discipline, so that it can be in the best position to capture value in the future when the market has recovered. It's a long-term approach that it hopes will pay big dividends down the road.