A recent study from Deloitte Center for Financial Services points to a big trend of growing wealth as struggling generations come into their own.

Baby boomers will continue to dominate the wealth picture -- but that won't last forever.

Today, baby boomers and their parents, the Silent Generation, control more than 80% of American household wealth. Baby boomers alone account for half of that amount, and it's expected to grow slightly over the next few years. But by 2030, after the last baby boomer reaches retirement age, that trend will reverse, according to a recent study by Deloitte: Generation X and millennials currently hold an 18% share of net U.S. household wealth, an amount that Deloitte researchers expect will increase to more than 47% by 2030. By then, baby boomers are expected to hold about 45% of net household wealth. That's a still substantial share, and it indicates that this generation will remain an influential force in the American economy, even as retirement expenses chip away at their assets and wealth.

It won't be a redistribution of wealth
The U.S. economy has by most measures recovered from the financial crisis, but the reverberations will ring for years, with people in every generation feeling the effects. Many baby boomers are having to work past the age they expected to retire. Gen Xers and millennials are already falling behind on their wealth-building activities. The lack of good-paying jobs has left many people under- and unemployed and has seen huge numbers of young adults stay in or return to school.

However, things are getting better.

There are more people working. The unemployment rate is near 5%, almost half what it was at the height of the recession. And while the rate of workforce participation -- which measures the percentage of the population working or looking for work -- has steadily declined from above 65% in 2008 to below 63% recently, more baby boomers are entering retirement age, and that's playing some role in this trend.

There's evidence that millennials and Gen Xers are faring better in the job market as well. According to the U.S. Census Bureau, the median household income for those between 25 and 34 has increased nearly 7% since 2011, while those between 35 and 44 have seen an 8% jump in income.

Along with that increase, people are saving more money: 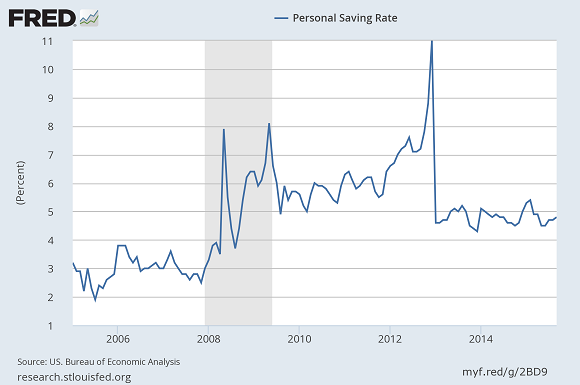 While it's still well below historical savings rates, the average savings rate has doubled since before the recession. At the same time, the country has gone through a big deleveraging, and debt payments are now a smaller percentage of household income than at any time in the past 30 years: 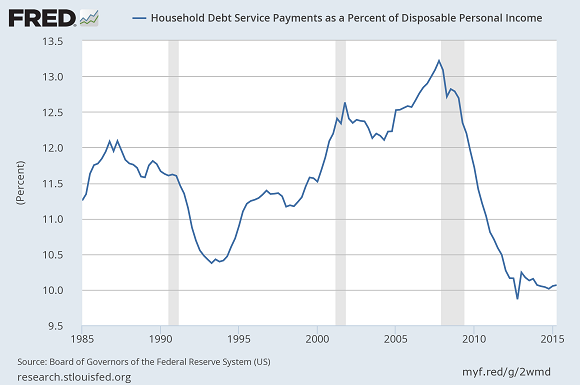 In other words, more young people are working and making more money, spending less of it on debt, and saving more. These are key factors behind Deloitte's projections for big growth in American personal wealth over the next 15 years: Combined, Deloitte expects that Americans' net wealth will increase by $48 trillion over the next 15 years.

Who's likely to see increased wealth
While the past half-decade has been hard on both millennials and Generation X, the combination of a strengthening economy and an aging baby boomer population is expected to create opportunities for these younger generations to ramp up their earnings. Generation X is just beginning to enter into its peak earning years, while the youngest generation is finally emerging from the impact of the jobless recovery that kept many in school and at home instead of starting their careers.

While Baby Boomers will continue to be the wealthiest generation for decades to come, the last Bboomer will reach retirement age in 2029, leading to an eventual decline in wealth as assets are used to fund retirements. This is the same trend the Silent Generation is experiencing now.

Looking at financial assets such as stocks and bonds, Millennials are expected to experience a strong 15% compounded annual rate of growth between 2015 and 2030 – a faster rate than Gen Xers' projected 11.2%, similar to its total net wealth growth as you'll see below. This is primarily due to a larger percentage of Millennials just now entering the workforce, versus most Gen Xers already established in the job market. Looking at total net wealth, which includes financial assets as well as assets like home values, both younger generations are expected to substantially grow over the next 15 years. Generation X is expected to grow its total net wealth from around $9.8 trillion today to $37 trillion by 2030; that's 11% annualized growth. At the same time, Deloitte’s study projects Millennials to grow total net wealth to $18.8 trillion. Capturing your share
Deloitte's study is, of course, based on certain assumptions about the continued strength of the economy, both domestic and global. Not only will this affect people's earnings -- which directly affects how much people can continue to save and invest -- but it will also play a big factor in investing returns, as well as the value of nonfinancial assets such as homes.

However, there are things people can do to influence their own success. For example, start as early as you can, putting aside as much as you can, and have a long-term plan. That's all a key step to building long-term wealth. There's also evidence that keeping investment-related fees as low as possible for mutual funds and ETFs -- including advisory fees, trading commissions, taxes, and expense ratios -- will have a positive impact on your returns.