Shares of burrito roller Chipotle Mexican Grill (NYSE:CMG) were rocked again on Friday, plunging more than 12%. There was a familiar cause: more cases of E. coli among Chipotle customers. The stock is now down 16% since Chipotle was first linked to an E. coli outbreak in late October. 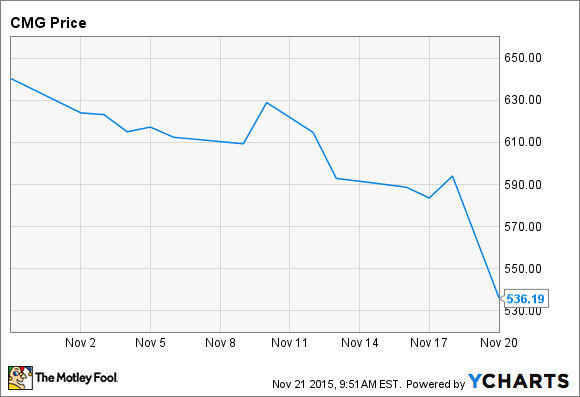 It will take time for Chipotle to fully regain customers' trust. However, I do expect the fast-casual leader to bounce back from this unfortunate incident. With the stock now marked down nearly 30% from the all-time high set in August, this could be a good time for long-term investors to buy shares.

Chipotle's E. coli problem spreads
In late October, Chipotle was notified by the CDC that several dozen people had been diagnosed with E. coli infections after eating at eight Chipotle locations in Washington and Oregon. Chipotle immediately closed all 43 of its restaurants in the affected region to stop the outbreak before it spread.

A few days after the news broke, Chipotle announced that it had taken a variety of additional food safety measures. These included replacing all of the food at each restaurant in the region, fully sanitizing all of its restaurants, conducting environmental testing at its Pacific Northwest restaurants and distribution centers, and batch testing some ingredients being used to resupply those restaurants.

By Nov. 10, the situation was under control enough that Chipotle began to reopen the affected restaurants, with the support of public health officials. At that time, no meals served after Oct. 24 had been linked with the E. coli outbreak.

However, last week, the CDC announced that cases of the same E. coli strain had surfaced in several other states: Minnesota, California, Ohio, and New York. Of the 45 people who have reported being ill, 43 had eaten at a Chipotle restaurant in the week before their symptoms developed.

The latest news was concerning to investors for two reasons. First, whereas it had previously seemed that the outbreak was contained to Washington and Oregon, now E. coli contamination appears to have occurred in a handful of states around the country.

Second, one person reported getting sick after eating at Chipotle on Nov. 6. It's possible that he or she got sick from something else -- but if not, it implies that Chipotle's initial countermeasures didn't fully eradicate the E. coli threat. For now, Chipotle appears to be confident that there is no ongoing risk. All of its restaurants remain open.

Expect a sales slowdown
The sharp drop in Chipotle stock over the past few weeks -- but especially on Friday -- shows that investors expect this incident to have a significant impact on Chipotle's sales. Based on the experience of fast-food chain Jack in the Box (NASDAQ:JACK) after a major E. coli outbreak more than two decades ago, that's probably an accurate assessment.

Jack in the Box was first notified that an E. coli outbreak had been linked to its restaurants in mid-January 1993. The news caused its same-restaurant sales to plummet.

In the first quarter of Jack in the Box's fiscal 1993 -- just before the outbreak -- comps rose 6.2% year over year. But in the second quarter, which ran from January to March and thus encompassed the height of the crisis, comps plunged 22.2% year over year. Comp sales declined about 9% in each of the next two quarters.

The result was a 7.4% annual decline in comp sales. However, as the crisis subsided, customers gradually began to return. Jack in the Box posted a full-year comp increase of 2.7% in fiscal 1994.

The E. coli scandal drove Jack in the Box stock down from around $7 on a split-adjusted basis before the outbreak to $5 immediately afterward. It briefly fell below $2 a couple of years later, but it has skyrocketed since then. Jack in the Box shares peaked around $100 earlier this year and now trade for about $74. Even if you invested in Jack in the Box right before it crashed, you would have more than doubled the market's return over the past 23 years.

If Jack in the Box could bounce back, so can Chipotle
If anything, it should be easier for Chipotle to recover from its current crisis. First, Jack in the Box initially disputed its responsibility for the E. coli outbreak in 1993, compounding the damage to its reputation. By contrast, Chipotle hasn't tried to shift blame -- it instead took quick action to try to contain the E. coli outbreak.

Second, the 1993 outbreak was linked to a much more virulent strain of E. coli. Ultimately, 623 people got sick and four children died. By contrast, only a few dozen people have gotten sick from the Chipotle outbreak and only 16 have been hospitalized (so far), with no deaths.

As long as the current E. coli outbreak doesn't spread any further -- at the moment, there is at most one case connected to food served at Chipotle this month -- I don't expect Chipotle to post the kind of massive sales declines seen at Jack in the Box in 1993.

In the short term, costs may rise as Chipotle spends more on advertising and promotions to reinvigorate store traffic. But the impact of this incident on its profitability should already be fading by this time next year. With Chipotle stock trading at its lowest valuation since late 2012, now could be a great opportunity to invest in this high-quality company.