With a December rate hike looking likely, the price of gold falls to its lowest level since Oct. 2009.

U.S. stocks closed essentially unchanged on the day after Thanksgiving, with the Dow Jones Industrial Average (^DJI 2.68%) and the S&P 500 (^GSPC 3.06%) down 0.1% and up 0.1%, respectively. Gold was more active, however, falling to a six-year-plus low, with the SPDR Gold Shares down 1.2% on higher than average volume.

Just like the "Yale model" that the university's chief investment officer, David Swensen, ushered in, we Fools are primarily "equity-oriented." However, if you're passionate about investing and the financial markets, it's impossible to ignore the goings-on in other asset markets, even those that have minimal relevance to the individual investor, like gold.

(A relic from another age, gold is neither an investment, nor a reliable store of value over a practical time frame. At best, it's a form of doomsday insurance or a speculative vehicle.)

And so it was that I noticed that, at $1,057.40 per troy ounce, the price of gold had plumbed its lowest level since October 2009 on this Friday after Thanksgiving.

Given the low liquidity in markets today, it would be unwise to ascribe too much meaning to today's price action. Zero Hedge (a website that should only be consulted with extreme skepticism) reports that a single seller dumped 18,000 gold futures contracts, with a notional value of roughly $1.9 billion, into a thin market, which may explain much of today's price move.

Nevertheless, the recent trend has not been positive for the yellow metal:

In its weekly flows report, Bank of America Merrill Lynch points out that precious metal funds suffered $1 billion in outflows in the week to Nov. 25, the highest figure in 17 weeks -- despite a four-day week due to Thanksgiving.

Precious metals funds typically invest in the shares of companies involved in the precious metal sector, which are a leveraged play on the price of gold.

With today's decline, gold has fallen 2.3% on the week -- its sixth consecutive weekly loss -- and now sits 10.7% below its mid-October high.

Last month, Goldman Sachs said that a December interest-rate hike would probably hurt gold and published price on Oct. 21 calling for a price of $1,050 per ounce in six months and $1,000 in a year's time. Gold was then at $1,167 per ounce; it has taken little over a month to come within a hair's breadth of achieving their six-month target.

If the Fed does implement its first post-crisis rate hike next month, will it hurt gold? Gold has a negative yield (if one includes storage costs), so rising rates increase the opportunity cost of owning it.

On the other hand, one might expect that a December rate rise has already been discounted in the price of gold: The odds of that occurring, based on prices in the Fed funds futures, is better than three-to-one (probability: 77.5%).

Nevertheless, the gold market attracts a different crowd, which might have a very different view on those odds – or the impact of a rate hike on the price of gold. Take Peter Schiff, for example, a prominent gold bug who never met a piece of disconfirming evidence he wasn't able to ignore.

This month, he said that he believes that a December rate hike is the less likely outcome of the Fed's December meeting, but that either outcome is bullish for gold! Talk about having your gold bar and eating it, too.

Mr. Schiff's hallucinations notwithstanding, gold could certainly trend lower from here. Although I don't put much stock in six-month or 12-month targets, I think we could well see the price in three digits next year, as the following graph suggests: 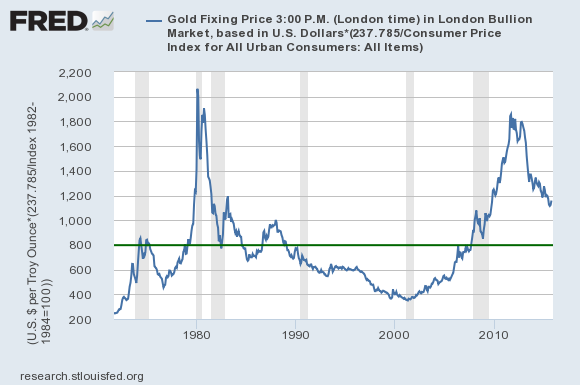 The blue line tracks the inflation-adjusted price of gold since August 1971, expressed in November 2015 dollars. The green line marks the average of that series, which is just shy of $800. In other words, a 25% drop in the price of gold from its current level is far from unthinkable. In that context, a goose egg would be a good result for gold's performance in 2016 -- and that's no golden egg.