Please ensure Javascript is enabled for purposes of website accessibility
Log In Help Join The Motley Fool
Free Article Join Over 1 Million Premium Members And Get More In-Depth Stock Guidance and Research
By Ashraf Eassa – Nov 27, 2015 at 6:00AM

Thanks to the folks at Chipworks, this Fool discusses the details of the A9X chip inside of Apple's iPad Pro.

Every year, the patent analysis and competitive intelligence company Chipworks tears down the applications processors found in Apple's (AAPL -1.51%) latest iPhones and iPads. As you might recall, Chipworks confirmed that the A9 processor inside of the iPhone 6s/6s was, indeed, manufactured by both TSMC (TSM -2.33%) and Samsung (NASDAQOTH: SSNLF), a fact that came as a surprise to many.

Chipworks also provided chip die sizes for both the TSMC-built and the Samsung-built A9s, giving the public a glimpse into how both chip manufacturers' respective 16-nanometer and 14-nanometer chip manufacturing technologies' compared in terms of transistor density.

After contacting the folks at Chipworks, I was able to get some interesting information about the A9X chip that powers the recently launched iPad Pro as well as a die shot of the chip that I am allowed to publish for your viewing pleasure.

Without further ado, let's get to the good stuff.

Say "hi" to the A9X
Following is a die shot of the A9X, courtesy of Chipworks: 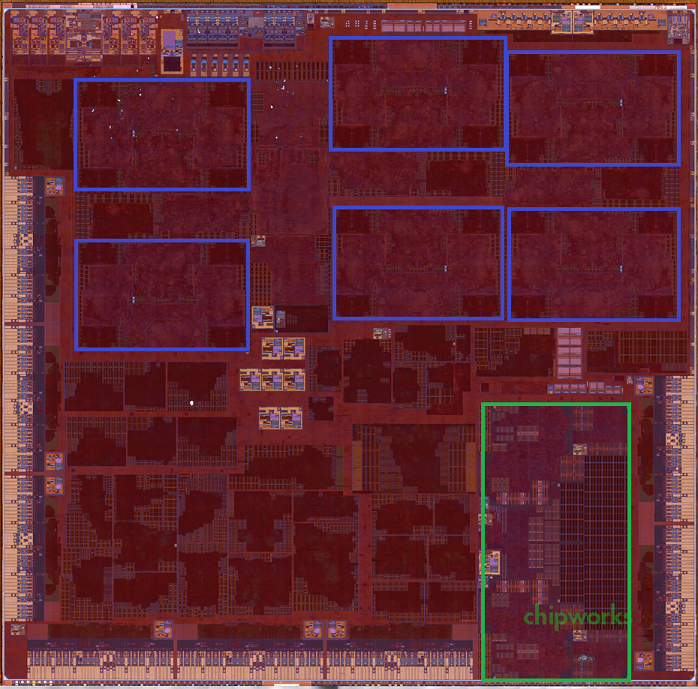 The Apple A9X in all of its glory. Source: Chipworks, with author annotations.

Chipworks' Dick James tells me that he sees a 12-cluster GPU, two CPU cores, and an absence of the level-three cache memory found inside the A9 chip (I'll explain why I think Apple didn't include it later in this article). I agree with his assessment. The two CPU cores can be seen in the green box, and I believe that inside of each blue box are two GPU clusters, for a total of 12 clusters.

One thing worth noting is that Imagination Technologies (NASDAQOTH: IGNMF) -- Apple's GPU IP supplier -- only lists variants of its Series 7XT graphics IP with 2, 4, 6, 8, and 16 "shading clusters." The 12-cluster design points to a semi-custom implementation by Apple of the Series 7XT, similar to what Apple did with the Series 6XT-based graphics IP in last year's A8X chip.

How big is this beast?
According to Chipworks, the chip measures in at approximately 147 square millimeters, a whopping 40% larger than the size of the TSMC-built variant of the A9 chip inside of the iPhone 6s/6s Plus. This is an absolutely huge increase in area (and by extension transistor count) from the A9, which no doubt means that this monster of a chip is far more difficult to manufacture, especially on a relatively new manufacturing technology.

Connecting the lack of cache with die size
Remember how I said that it doesn't look like the A9X features the 8 megabytes of on-die cache memory that the A9 does? Well, I think I have an explanation for that.

The A9X features a memory interface that's twice as wide as the one on the A9, allowing the chip to pass data to and from memory at twice the rate that the A9 can.

I believe that this is enabled by the fact that a chip like the A9X, which powers a relatively large device such as the iPad Pro, has both more thermal headroom than the A9 (since the iPad Pro is a larger device that can handle a more power hungry chip) and can take up a larger area footprint than a phone chip (the memory inside of the iPhone 6s/6s is stacked on-top of the A9 package; the memory in the iPad Pro sits on the logic board).

Finally, note that the A9X is already a very large chip, which means that it's probably much more difficult (and expensive) to manufacture than the A9. Adding the additional level three cache may not have brought enough of a performance improvement (particularly in light of the much wider memory interface) to justify the increased chip manufacturing costs.

The A9X is a great technical achievement
I believe that the A9X is easily the most advanced mobile system-on-a-chip available today. It has best-in-class CPU/graphics performance and it is an extremely large chip built on a bleeding-edge foundry manufacturing process.

It is little wonder that the chip performs as well as it does in the various performance tests available online, and I believe that the engineering teams at Apple should be quite proud of themselves for building and deploying a chip like the A9X in 2015.

I look forward to seeing more from Apple's chip teams in the coming years; I have a feeling that investors and customers alike will continue to be impressed.