Among the more noteworthy numbers Sirius XM (SIRI -1.60%) had to report in its third-quarter earnings call on Oct. 22 was its penetration rate in new cars -- the number that tells us how many new cars roll off the assembly line with a satellite radio installed. It now stands at 75%.

That's a particularly notable number because it's higher than Sirius executives had thought it would be at this stage and as high as they've said it will likely reach. In fact, the third-quarter penetration rate was up nearly four percentage points from the corresponding quarter a year earlier.

Industry forecasts call for about 17 million new cars to be sold this year, which means Sirius XM satellite technology should find its way into nearly 13 million new cars this year. The company figures its technology is installed in some 79 million cars on the road today, or nearly a third of the cars in the U.S.

That so many auto manufacturers recognize the value of equipping their vehicles with satellite radio technology is good news for Sirius XM and its investors -- and CEO James Meyer called it "a strong indicator that satellite radio is a must-have feature for most cars sold in the United States."

But shareholders shouldn't be cheering if that number continues to grow past the 75% mark. In fact, a higher penetration rate -- if it happens -- might end up being bad for business. Here's why.

More cars, more subscribers
Satellite radio's early growth was built around the sale of Sirius and XM devices -- portable receivers that listeners attached to dashboards or windshield mounts, slipped into docks at home, or even carried along like an iPod that had an internal antenna to pick up the signal.

But over time, the business has become increasingly driven by Sirius XM getting its technology installed into cars as they're built. That way, it can work with manufacturers to have the hardware hard-wired into vehicles and their dealerships to line up free trials for buyers who it can then convert into paying subscribers. As high-speed Internet connections have advanced, subscribers can access the services through the Web in their home -- or via smartphone -- which has left an increasingly shrinking need for anyone to own a radio device, save for those who are driving older-model vehicles or cheaper models -- an important point that I'll come back to in a minute.

As a result of that shift, the company's success moving forward has been dependent on it brokering more deals with automakers and increasing that penetration rate. That's made that number an important one to watch for investors, who should have been pleased to see its continuing rise.

Simply put, greater penetration in new vehicles meant more drivers trying the service and eventually coughing up the $11 to $20 a month to keep it beaming into their Beamers (or Toyotas, or Hondas, or Fords).

The business is evolving
But Sirius has started to see diminishing returns on the additional vehicles in which its technology is being installed. That's helping drive up the company's cost of goods sold faster than its revenue, which we can see in the chart below. 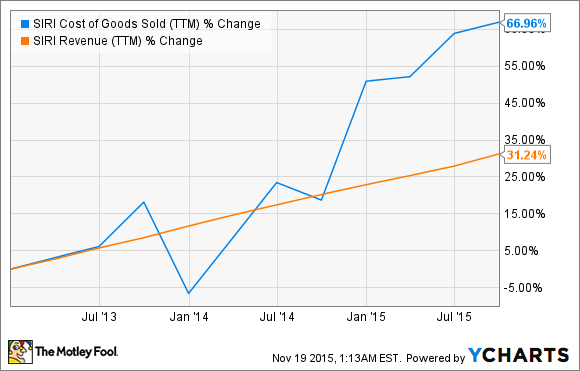 This is happening for a couple reasons.

First, its effort to have satellite technology installed on the manufacturing line, for the most part, started in earnest at the higher end of the market and worked its way down. It targeted luxury cars first for a simple reason: Their owners are more likely to pay for a monthly radio service.

But at 75% penetration in new cars, Sirius has very little room to expand its penetration outside of the lower end -- inexpensive compacts and subcompact cars. Sirius already has agreements with 36 car brands -- nearly all major brands sold in the U.S. -- as well as three recreational vehicle makers and Harley-Davidson.

Continued growth in this number won't be reason to cheer
No doubt, there are some people who drive cheaper cars who might enjoy satellite radio enough to pay. But the percentage of those car owners who are willing to ante up to listen to Howard Stern or have access to live sports broadcasts no matter where they are traveling is bound to be far smaller than it is at the higher end.

And that means Sirius is likely to get a smaller return on every radio installed in cheaper cars.

So, while it's been good to see that penetration rate on the rise over the years, we've reached a point when investors should be happy to see it top out.