Rooftop solar is becoming big business, but it costs billions to create the manufacturing capacity to build solar, and someone has to finance the long-term cash flows these systems generate. Image source: SunPower.

On the surface, you would think renewable energy companies that can grow quickly and exploit the industry's massive potential should be the kind of companies investors will want to buy and hold for the long term. But time after time, the companies that grow the fastest have been abysmal investments. Suntech Power, LDK Solar, Yingli Green Energy, and SunEdison (OTC:SUNEQ) are just a few of the former industry highfliers that have gone from darling status to bankruptcy, or that teeter on the verge of financial insolvency. They also provide a similar story of growth, debt, and massive losses that couldn't be overcome by even more growth.

So, why is growth such a bad thing for renewable energy companies, and why have slow or no-growth companies like SunPower (NASDAQ:SPWR) and First Solar (NASDAQ:FSLR) been able to survive while others rise and fall around them? The answer lies in what companies have to do to grow in the solar industry in the first place.

Growth adds debt
To fund growth, solar companies have to invest a lot of money in capital projects. Whether you're a solar installer like SolarCity (NASDAQ:SCTY.DL) putting systems up on roofs across the country or a manufacturer like Yingli Green Energy, it takes capital to build out capacity.

In most cases, the capacity being built will pay off over 10 to 20 years, either from selling products like solar panels or from collecting customer payments. So, solar companies are spending billions up front to generate a long-term payoff, and usually that means adding a lot of debt to fund operations.

Debt isn't necessarily a bad thing for growth companies, but solar is different than most industries. Falling costs create a larger market for the solar industry, but they also create challenges in making enough money to pay off debt.

Falling solar costs are bad for growth
For most businesses, growing volume is the path to long-term growth. But in solar, it can be a path down the rabbit hole, because costs are falling so fast. The phenomenal returns you've projected for that new manufacturing plant or fleet of installations in year one can quickly dry up once the growth train stops.

Let's take a solar panel manufacturer as an example. This hypothetical company starts off with a brand-new manufacturing plant that has initial production of 100 MW; over the course of the first four years of operation, that capacity will be increased to 300 MW. Total cost for this plant is $300 million ($1 per watt), and debt used for funding construction has an 8% interest rate.

Assume that the cost of solar panels from the manufacturing plant begin selling for $2 per watt but decline in cost 25% per year and generate a consistent gross margin of 20%.

You can see that in year one the company's gross margin was $40 million, and in year two, that grew 50% to $60 million. But by year five the company was generating less gross margin than ever before and had little hope of increasing margins in the future, because solar costs are going nowhere but down.

If we also assume that operating expenses might be $30 million for this company, we can see the dilemma starting to unfold. $54 million in gross margin would be needed to pay for the $30 million in operating costs and $24 million in interest on the debt, so this company goes from a profit in years two and three to losing $16 million by year five.

This is just an example, but if you look at what happened to companies that built out manufacturing capacity with debt (Suntech Power, LDK Solar, Yingli Green Energy), you'll see similar story lines playing out. Falling costs in the solar industry lead to falling profits unless you have enough volume growth to make up for the lost margin. And growing margins require even more capital investment.

Financial engineering works -- until it doesn't
One way many solar installers got around the growth conundrum I described above is by using financial engineering, particularly on the installer side of the business. If I sign a contract with a customer for 20 years, I can divvy up the contract payments and tax benefits, selling them to different parties and taking a profit along the way. This is what SolarCity has done with tax equity and asset-backed securities.

Another method that became popular was funding growth through yieldcos, which could continually issue shares and debt to buy projects. As long as the cost of debt and equity was lower than the returns, these projects providing this structure could go on indefinitely. This is what SunEdison did when acquiring billions of dollars in businesses over the past few years, assuming it could fund acquisitions through its yieldcos.

Both structures make a lot of sense on paper, but they're reliant on strong market sentiment to allow financing to remain open -- and market sentiment can be fickle. When the price of yieldco stocks began to fall, it crushed the thesis that SunEdison could grow indefinitely and just fund projects through its own yieldcos. And when investors started to question how long SolarCity could keep up growth at the margins it promised, and if those margins would ever be realized in the first place, the stock was hit hard.

When you're reliant on financing from third parties to fund growth, then your very business model isn't very self-sufficient. Financial engineering can make solar companies look really good, but until you have the cash in your pocket, the projections these companies put out are just that -- projections. And that's a tough thing to build a business on.

Building a solid foundation is hard
Growth seems like it would be a big advantage in the solar industry, but too often it's been a road to ruin for both companies and investors. Using debt to fund growth built on falling costs and the volatility of businesses built on financial engineering have played a major role in the demise of some of the industry's biggest players.

Left standing are SunPower and First Solar, two companies that won't knock over anyone with their growth but that continue to churn out profits year after year. They do this by managing their balance sheets conservatively and by not overinvesting in growth, even when the opportunity in solar seems too big to pass up. 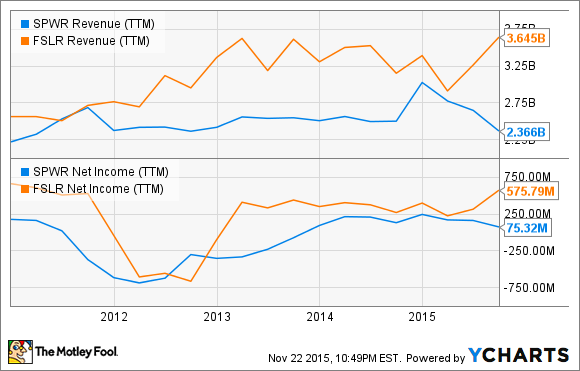 The dislocations happening in high-growth companies have also become an advantage for First Solar and SunPower, which can sell utilities and commercial customers on their stability and long-term viability, which should help to expand their margins above competitors'.

Yieldcos, which were SunEdison's weakness, could be a strength for both companies because they have financing flexibility. Their lack of leverage in the past means they have flexibility to build projects on the balance sheet, sell them to third parties, or sell down to the yieldco at their leisure.

Sometimes a conservative approach wins in the long term, even in high-growth markets. And it looks like those companies that chose to build a fundamental advantage before growing at breakneck speed will be the ones that pay off for investors in the long run.