Self-driving cars are coming soon, the automakers say. And a new study suggests that lots of people around the world are eager to give them a try.

The first car to come to market with some self-driving capabilities was a big Mercedes-Benz sedan. There are many more on the way. Image source: Mercedes-Benz.

It won't be long before an automaker brings a fully self-driving car to market. But are consumers ready to embrace them? Already, Mercedes-Benz and Tesla Motors (TSLA 3.94%) are offering cars with systems that will let drivers take their hands off the wheel under certain specific circumstances.

More are on the way: Nearly all of the major global automakers have self-driving systems in some stage of development. General Motors' (GM 8.35%) Cadillac brand, and Volkswagen's (VWAGY 1.54%) Audi subsidiary, are expected to introduce systems like Tesla's on some of their luxury sedans soon, perhaps as early as next year. And Alphabet's (GOOGL 1.96%) (GOOG 1.96%) experiments with self-driving cars have drawn a whole lot of attention.

Are we ready for this?

Big new study: It's time for self-driving cars
It turns out that experts have been asking folks around the world that very question -- and the results of their surveys suggest that quite a few people are indeed ready to give this new technology a try.

The World Economic Forum, working with the Boston Consulting Group, recently did an extensive study on how consumers around the world perceive self-driving vehicles. The study included four-hour focus groups in Singapore, Berlin, and London, as well as extensive online surveys with inhabitants of cities in 10 different countries. There were enough respondents in eight of those countries to generate this chart: 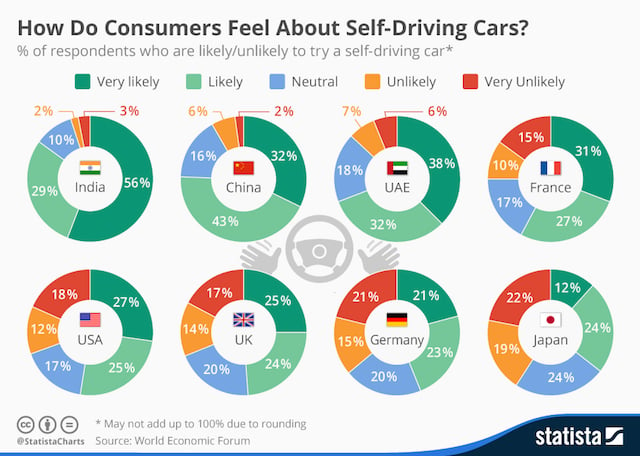 You will find more statistics at Statista

As you can see, generally speaking, consumers in developing countries were more eager to try self-driving cars than those in developed nations. Somewhat surprisingly, the idea was especially unpopular in Germany and Japan.

There were more intriguing insights in the study's results.

As anyone who has driven in a city knows, finding on-street parking can be a huge hassle. The idea that the car can drop you off at your destination and then go find a parking spot on its own has some big appeal.

Other benefits cited by a significant number of respondents: The ability to multi-task during a commute, and letting the car handle traffic jams. (The automakers are already on that last one: Mercedes' Intelligent Drive system is intended to be used in slow-moving highway traffic.)

Consumers also think that self-driving cars will be battery-electric hybrids or fully electric, and many are willing to pay up to $5,000 more for a car with self-driving capabilities. But... only 35% percent of the survey participants who were parents said that they'd be willing to let their kids ride in a self-driving car without an adult.

So what does all this mean?
I think it means that people, generally speaking, are curious about the technology, and willing to give it a try. A lot of the people surveyed said that they weren't interested. But keep in mind that almost nobody has tried a self-driving car yet. As more people get firsthand experience with the technology, it's likely to become more popular (assuming that it works well.)

Long story short: If the automakers and Silicon Valley can make this technology safe, reliable, and not outrageously expensive, it looks like they'll find plenty of people willing to give it a try.

Virgin Orbit's Got Bigger Problems Than You Realize