Full Social Security retirement age is either 66 or 67, depending on when you were born. Either way, here are some reasons why that's the right age for you to take your benefit. 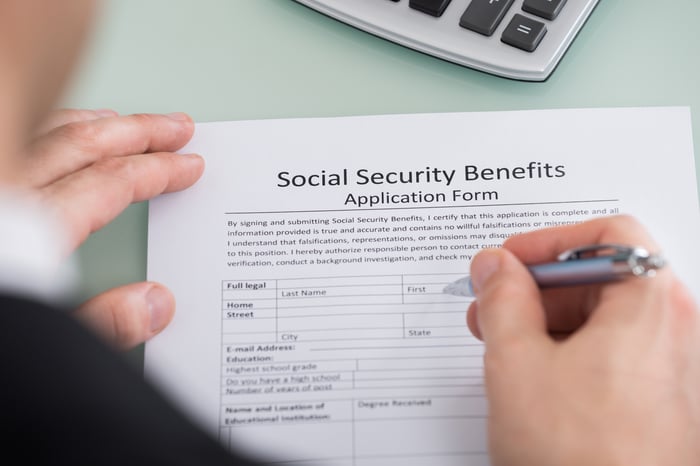 If you live an average life expectancy, you'll probably get similar dollars in total, but there are a number of factors you should consider when determining the "right" claiming age for you and your family. We asked three contributing writers to give us a reason why the "full retirement age" of 66 or 67 is the best age to take Social Security, and here's what they had to say.

As the full retirement age rises, the advantages of waiting rather than claiming Social Security benefits early will get bigger. If your full retirement age is 67, then you'll take a haircut of about 30% if you claim at age 62 rather than waiting until age 67. The reduction for claiming at age 63 is about 25%, with 64-year-olds taking a 20% haircut.

By contrast, waiting beyond age 67 will earn you additional delayed retirement credits, but because you'll only have three years before reaching the maximum claiming age of 70, you won't be able to boost your monthly check as much as those who are retiring now. The largest possible addition to your full retirement age benefit by waiting until age 70 will be 24%.

For many, age 67 will be a good middle ground between earlier and later filing options. Waiting until full retirement age always gives you some flexibility that filing early takes away.

Waiting longer may mean bigger checks, but not more total money for most people
Selena Maranjian: Though 67 (or 66) is the regular age at which you can start collecting your full benefits, you can opt to start receiving benefits as early as age 62, or as late as age 70. There are many arguments for and against each, with the biggest ones being that you will collect significantly smaller monthly checks if you start at age 62, and significantly larger ones by waiting to start at 70.

Before you start stressing out about when to start collecting your benefits, know this: Per the Social Security Administration, if your life turns out to be of average length, it won't really matter when you started to collect your benefits. It's designed for little difference. Bigger checks are certainly more appealing, but if you delay starting to collect them for three years, until age 70, you'll miss out on collecting monthly checks for those three years.

How many months of that $360 increase will it take to make up for the foregone $54,000? That would be 150 months, or 12.5 years. You'd break even if you collected until about age 82.5. Go ahead and think hard about when to collect, as delaying or starting early can make good sense for some. But don't dismiss the idea of starting to collect on time -- at age 67.

Taking it too soon could hurt in your later years versus the higher benefit at full retirement age
Jason Hall: As Dan and Selena both point out, there are a wide range of ages when you can start taking your Social Security benefit, with a wide range of monthly payments based on how early you take it, or how long you put it off.

Here's the best reason I can think of that makes your full retirement age the right time to take your benefit: It will provide the right amount of monthly supplemental retirement income for you to live the retirement you want, both now when you're younger and more active, and later in your retirement.

As Selena points out, the total amount of money you'll receive will be about the same if you live an average life expectancy, but you also have to consider your other sources of income. According to a number of sources, the median retiree has only enough retirement assets in 401(k) and similar plans to generate around $4,000 per year in additional income. As you age, those assets will dwindle, potentially leaving you exposed to a much smaller monthly check if you outlive those assets.

In summary, don't think about Social Security based just on "today," but also consider your other assets, and the impact on your quality of life over time if you started taking Social Security prior to full retirement age, and your other sources of income dwindle.