Especially in a year as erratic as 2015, some investors are understandably exasperated with investing in volatile maturing markets like China. However, long-term Foolish investors know that the key to successful investing often involves looking beyond short-term swings and instead remaining focused on the big-picture opportunities at hand.

Chinese search giant Baidu (NASDAQ:BIDU) serves as a perfect example of this dynamic, having experienced its own spectacular collapse and subsequent rally this year. 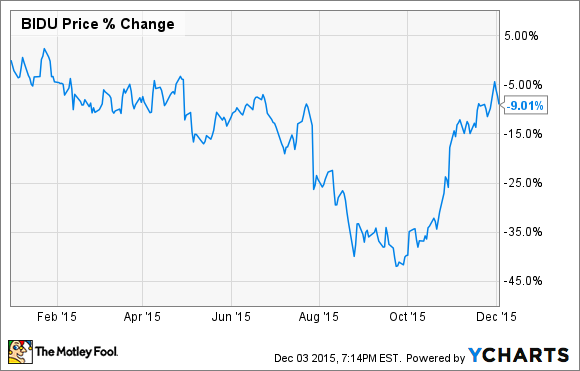 Today Baidu remains one of my favorite long-term buys in all of tech. Thanks to the resounding global success of Google, investors typically understand the tailwinds aiding the original focus of Baidu's business, search. However, in part owing to a huge -- and, I believe, wholly underappreciated -- factor, Baidu enjoys a far vaster long-term growth horizon than many investors today realize.

Especially to most Western investors, Baidu is most closely associated with its search engine business, which also features prominently in its investment thesis (see section below). However, beyond Baidu's search opportunity, the company's recent investments in the red-hot Chinese online-to-offline (O2O) market considerably expand Baidu's potential financial opportunity.

As is the case the world over, the rise of the mobile Internet is reshaping brick-and-mortar industries in China. And thankfully for its investors, Baidu, alongside a raft of other Chinese Internet powers, has moved decisively to tap into this booming space. Although it has made a number of minority investments in various O2O companies, Baidu's major O2O reporting segments, which Baidu recently consolidated into a single "Transaction Services" line item, include the recently merged Qunar/Ctrip (online travel), Baidu Nuomi (group buying), Baidu Takeout Delivery (food delivery), Baidu Maps, Baidu Wallet, and others. Baidu will likely develop or invest in other O2O verticals in the years ahead, further expanding its already substantial growth trajectory.

In its most recent quarter, Baidu's Transaction Services segment saw Gross Merchandise Value (GMV), the total amount of merchandise sold over its platform, surge 119% over the prior year to $9.5 billion. However, this figure remains a veritable drop in the bucket compared to O2O's long-term potential in China. Baidu CEO Robin Li noted on the company's conference call that only 5% of China's restaurants and local entertainment businesses are online today.

Big picture, analysts and industry insiders believe the overall Chinese O2O market represents somewhere between a $400 billion and $1.6 trillion annual revenue opportunity. That's a laughably broad range, but hopefully the sheer immensity of this market's scale isn't lost here either. Even if Baidu captures a relatively minute fraction of this space, the financial windfall could prove significant for a company that produced $2.9 billion in total revenue in its most recent quarter.

Baidu's core customer base consists of small and medium sized businesses (SMEs) in China. In its most recent quarterly report, Baidu recorded 623,000 online marketing customers, a 21% increase over the same period last year. However, according to 2012 statistics from its Ministry of Commerce, roughly 4.3 million SMEs operate in China, giving Baidu only 14% saturation among its core customer base. This also doesn't reflect Baidu potentially adding large Chinese enterprises or international businesses of all sizes to its list of customers.

Precisely gauging exactly how many online marketing customers Baidu can eventually capture remains guesswork at best. However, as search advertising enjoys several structural advantages over other forms of marketing (intent, measurability, etc.), it follows that Baidu's search business remains in its relative infancy as well.

Trading at 39 times its last-12-months earnings, Baidu's pricing certainly implies a healthy amount of growth for investors buying today. However, if the company continues to grow into the massive markets highlighted above, those willing to patiently invest alongside this decade-plus expansion should stand as good a chance as any of outperforming most other technology stocks over the years to come.