What: XBiotech (NASDAQ:XBIT) jumped more than 50% today after announcing that its colorectal cancer drug, Xilonix, had passed its European phase 3 clinical trial.

So what: Talk about a U-turn. 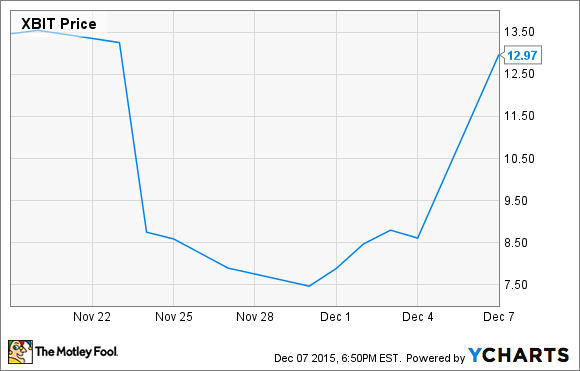 A few weeks ago, Xbiotech tumbled after announcing that 72 patients in the phase 3 trial had issues with their data: 25 patients dropped off the study before treatment, 14 got drug or placebo when they were supposed to get the other treatment, and 33 patients completed the trial but didn't receive one or more of the end-of-study evaluations.

Despite the irregularities, XBiotech went ahead and analyzed the data from the trial. The patients who didn't receive either Xilonix or placebo were excluded from analysis -- that number is down to 24 patients from the original disclosure of 25, but there was no mention from the company about why there was a change. The patients that had missing data and those that received Xilonix instead of placebo were considered non-responders.

Using that criteria, 33% of patients that got Xilonix treatment were deemed responders compared to 19% for the placebo group, which was a statistically significant difference.

Now what: Despite Xbiotech seeming to do the right thing and being conservative with how it's treating the issues with the data, I still have some reservations. I checked in with XBiotech's media representative with my questions, but she wasn't able to get me answers from the company before publication.

In addition to the question about the missing patient that was never treated, it isn't clear which group the patients with missing data and those that received Xilonix instead of placebo were counted in. If they were counted in the placebo group, then registering them as non-responders would make the drug look better because it would drag down the placebo response rate. We'll have to see how European regulators handle the irregularities.

Xbiotech is running a second trial testing Xilonix for U.S. regulators who want to see an increase in overall survival data rather than response rate. A positive trial stateside would certainly give investors confidence that Xilonix works, but given the issues with the European trial and the difference in endpoints, the latest data shouldn't give investors much confidence that the trial will be successful.