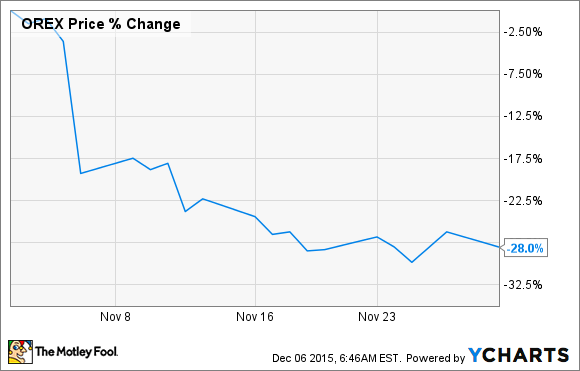 What: According to data provided by S&P Capital IQ, shares of anti-obesity drugmaker Orexigen Therapeutics (NASDAQ: OREX) fell by 28% last month. This marked decline in the biotech's share price was triggered by a lackluster third-quarter earnings report, where the biotech's flagship fat-fighting pill Contrave generated only $12.8 million in North America sales. After divvying up the revenue with its marketing partner Takeda Pharmaceutical, Orexigen booked a mere $2.6 million in royalties from U.S. net sales of the drug during the three-month period.

So what: Orexigen is currently losing around $4 million a month, and this number is expected to rise once the company initiates the required post-marketing study assessing Contrave's long-term impact on cardiovascular health. As the company exited the third quarter with $233.4 million in cash, cash equivalents, and marketable securities, Orexigen could be facing a cash crunch before the end of 2016.

Now what: Orexigen CEO Mike Narachi tried to assuage investors' concerns about these dismal financial figures by reiterating his belief that the "overall market for anti-obesity medicines" will grow significantly in 2016, implying that Contrave's sales will start to pick up in a big way going forward. But we've heard similar claims from the management team of Arena Pharmaceuticals (NASDAQ:ARNA) and other companies with competing FDA-approved anti-obesity medicines in the past. And so far, these optimistic projections haven't come to fruition, although Arena did report a jump in sales of its weight control management drug Belviq by nearly 10% between last quarter and Q3 2014. Still, Arena is looking at just $4.9 million in quarterly sales of Belviq.

Arena and Orexigen have to figure out a way to persuade a broader range of payers to cover their prescription weight-loss pills. After all, patients don't appear to be willing to come out-of-pocket in large numbers for these drugs. That's why investors may want to remain cautious with this particular group of speculative biotech stocks as a whole right now.