What: Shares of offshore oil and gas drilling contractor Seadrill Ltd. (NYSE:SDRL) fell 10% on Dec. 8, after declining by just as much the day before. The two-day sell-off puts Seadrill's shares down 20% this week to $4.38 at market close, the all-time low for the company's stock. Here's some sad context: 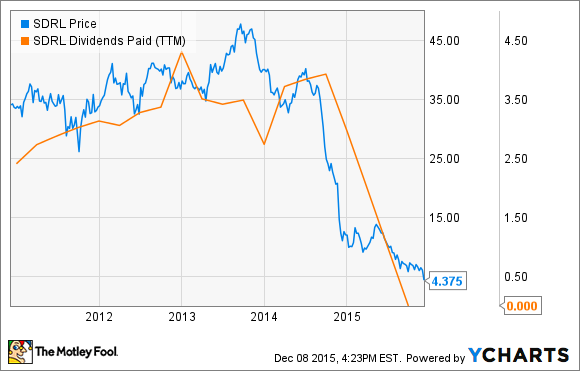 Seadrill's stock price is barely more than the $3.93 in dividends the company paid out in 2014.

So what: Of course, Seadrill isn't paying a dividend now, having halted it in late 2014 as the reality of a long-term decline in offshore drilling demand set in. As things stand today, there is just too much oil and not enough demand growth to support the number of offshore vessels operating, not to mention the glut of newbuilds the industry has on order -- many of which are scheduled for delivery over the next year.

This week, oil prices are down even more following OPEC's announcement last week that it wouldn't cut oil production. At the end of trading today, the Brent index -- a major global crude oil benchmark -- was barely over $40 per barrel, while West Texas Intermediate, a major North American wholesale price, was below $38 on fears of an even more protracted turf battle between U.S. shale producers and Saudi Arabia for market share.

While short-term -- and largely fear-driven -- oil futures volatility really has little to do with Seadrill's prospects, the increasing likelihood of a protracted downturn in prices is certainly bad for the company. The more oil Middle Eastern OPEC countries like Saudi Arabia pump from their vast onshore reserves, the less demand there will be for offshore development.

That's doubly true when oil prices are down, because offshore oil is simply more expensive to find and develop. And that means the big integrated oil companies, as well as state-owned oil companies, are less likely to invest in offshore. That's before even considering that capital expenditures are getting slashed across the industry.

Now what: Where does Seadrill fit in all of this? The company has long touted its high-spec new fleet as being a competitive advantage. And while that's true in a healthy demand environment, the company's massive debt load -- a product of the aggressive expansion of its high-spec fleet -- is a major risk. Seadrill, more than any other operator, must keep its fleet working in order to cover its debt expenses, while less-leveraged competitors will find it easier to idle and scrap vessels, as well as accept lower day rates for rig contracts than Seadrill. 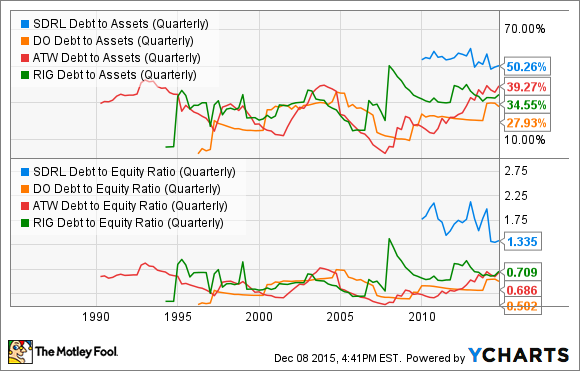 Simply put, Seadrill is in rough seas. And while the price drop of the stock -- and of oil -- doesn't directly increase the company's risk profile, Seadrill is not a "safer" investment simply because the stock is 20% cheaper than it was last week. The offshore market remains ugly, and the outlook is very uncertain.