What: Shares of residential solar installer Vivint Solar Inc (NYSE:VSLR) dropped a whopping 30% in November as the company's deal to be acquired by SunEdison moved closer to unraveling.

So what: SunEdison was supposed to buy Vivint Solar for $2.2 billion in cash and stock, but part of that deal was predicated on TerraForm Power buying $922 million in assets. But both SunEdison and TerraForm Power have plunged since the deal was announced, and now it looks like funding it will be extremely difficult. 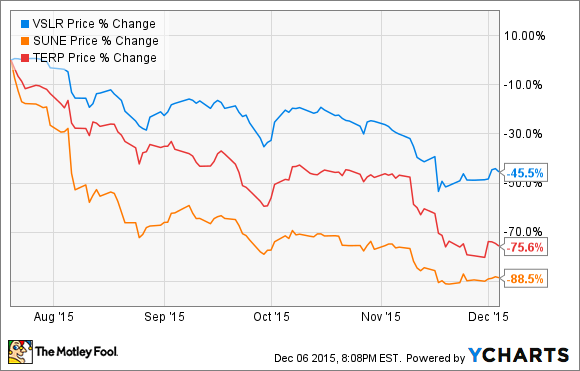 The acquisition was supposed to include $9.89 in cash, $3.31 per share in SunEdison stock, and $3.30 per share in convertible notes. The stock has obviously declined in value, but Vivint Solar's shares now trade below what SunEdison is supposed to pay in cash.

Now what: With SunEdison and TerraForm Power's pain there's uncertainty as to what happens to Vivint Solar now. SunEdison says it plans to complete the transaction, but the market isn't putting much faith in that now.

I think Vivint Solar would be better off walking away from the acquisition, but even that may not be enough to boost the stock. Investors have lost faith that residential solar customers will be as profitable as Vivint Solar estimates. Until confidence in the business returns, acquisition or not, Vivint Solar will continue to flounder.