The climate talks taking place in Paris will wrap up this week, and while we don't know what the outcome will be we know that the mood has changed from the last climate talk in Copenhagen. Countries are starting to make real commitments around reducing emissions and building more renewable energy capacity, and that will open up new markets to industry leaders like First Solar (NASDAQ:FSLR).

While more renewable energy would be good for a lot of companies, what separates First Solar is the performance of its products in some potentially massive solar markets.

Thin film hits the mark
Many of the countries making the biggest splash in the solar industry are also among the sunniest in the world. Saudi Arabia, India, and the UAE are a few of the countries planning to spend hundreds of billions of dollars to build solar in the next decade, and they all have large swaths of desert that could be exploited.

But not all solar is created equal when it comes to extreme conditions. Conventional solar cells are prone to cracking when they go through very extreme heat cycles, and performance also gets worse as the temperature goes up. But First Solar's thin-film panels don't suffer the same problems. You can see below that there's a 2.6% capacity factor advantage at 122 degrees Fahrenheit, reaching up to 5.7% if it's also humid at that temperature. 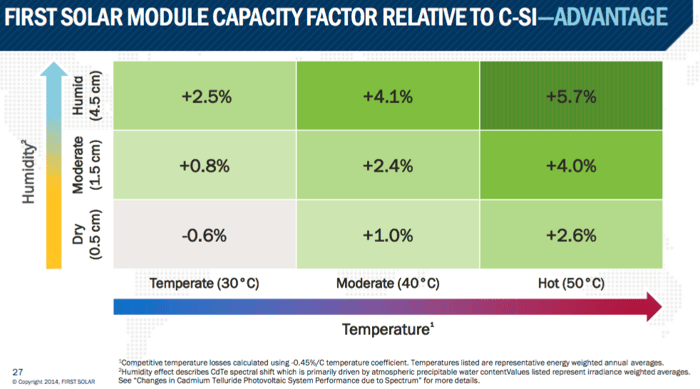 When combined with rising efficiency, which reached 16.4% on First Solar's best manufacturing line last quarter, the company will be able to generate more energy for less cost in some of the world's biggest and hottest renewable energy markets.

A balance sheet to partner with
Another risk that's moved front and center of late is the ability of developers themselves to build projects as planned. There's been a string of financial challenges for solar developers, including bankruptcies, companies backing out on acquisitions, and projects being sold to developers with different technology.

As a result, I think countries and utilities within those countries will want to work with companies that have the track records and financial wherewithal to complete projects on time and as planned. This puts First Solar in a prime spot to enter markets from a position of strength on top of superior technology.

First Solar is set up to succeed in emerging solar markets
There's a massive opportunity for growth in emerging solar markets outside of traditional powers like Germany, the U.S., and China. As places like India, Saudi Arabia, and parts of Africa talk in Paris about opening up to solar development, First Solar will hold a strong position in the key markets it chooses to grow in.

The electricity market is $2 trillion per year, and for a company like First Solar, which can grow in the industry's emerging markets and compete with tangible competitive advantages, the opportunity is tremendous. And First Solar is just scratching the surface of that potential.