Since the launch of Windows 10 in late July, shares of longtime mobile loser Microsoft (NASDAQ:MSFT) have been seemingly unstoppable. 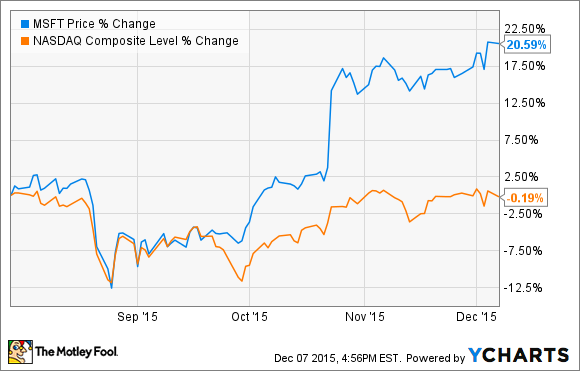 However, one critical element of Microsoft's multiyear turnaround plan remains absent -- mobile apps. As a number of recent moves highlight, Microsoft's software strategy perhaps isn't on as sound of footing as it might seem.

A few weeks ago, Microsoft confirmed its plans to halt its controversial Project Astoria, without further word on the divisive initiative's future. Project Astoria is one of four "bridge" projects Microsoft created to allow non-Windows apps to run on Windows 10 devices, projects aimed at directly addressing what many viewed as an impediment to Windows 10's long-term appeal. The project used Microsoft's tools to port apps from Alphabet's (NASDAQ:GOOG) (NASDAQ:GOOGL) Android mobile OS onto Windows 10. But why would Microsoft either pause or kill such an important initiative?

The answer might lie in one of CEO Satya Nadella's core ambitions for Windows 10 -- universal Windows programs. To further court Windows developers, Microsoft touted what it calls "Universal Windows Apps," which run seamlessly across all Microsoft device types, as a cornerstone of its Windows 10 efforts. However, with Project Astoria creating a low-effort path to flood the Windows 10 app store with Android-based apps, management may have opted to cater to the current developer base by sacrificing Astoria.

At Microsoft's shareholder meeting last week, Ballmer criticized the idea, publicly saying "that won't work" to the audience as Nadella explained the rationale behind Universal Windows Apps. Instead, Ballmer again made the case for Project Astoria and the hoard of Android-based apps it promises as the optimal software strategy for Windows 10, especially on mobile. Risking disenfranchising your current developers presents a major risk for Microsoft, which needs all the developer support it can muster. However, refusing to aggressively address its mobile apps issue seems to play right into Apple's and Alphabet's hands.

Alphabet and Apple remain in the lead
Microsoft has made meaningful strides on nearly every product front in the past several years. Windows 10 is a huge improvement over the unpopular Windows 8. The Surface lineup of tablets has evolved from laughable iPad wannabes into compelling devices that can justify their own claim of being "laptop replacements." The new Lumias can go toe-to-toe with any of the best smartphones on the market.

But in business terms, this all matters very little. Despite all the recent improvements, Microsoft appears to be too late to the mobile party. Dawdling between mobile strategies for years allowed Apple and Alphabet to win the day. According to respected industry analyst Benedict Evans, here's how the balance of power has shifted in computing in recent years. 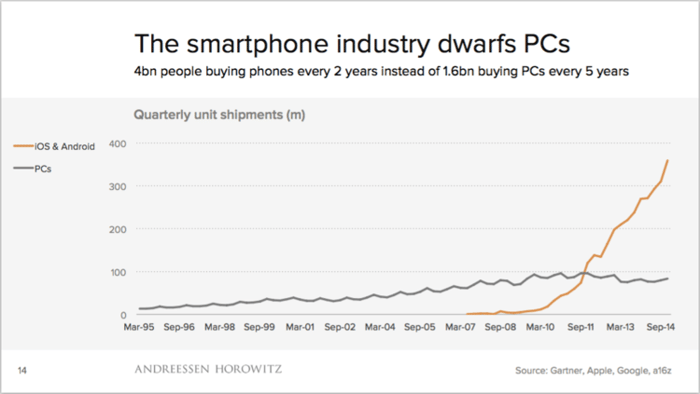 Things become particularly problematic for Microsoft, since the smartphone market is headed toward maturity. Research firm IDC expects the global smartphone market to expand by 9.8% in 2015, the first ever year that the smartphone will fall into single-digit growth. This situation leaves Microsoft in the challenging position of having to steal market share from Apple and Alphabet's Android, rather than win first-time users. Raiding Apple's sticky ecosystem or countering Android's inherent cost advantages with OEMs will be only more difficult under these conditions, which is why IDC projects Windows' smartphone market share to remain flat through 2019.

In light of the apparent backtracking on Project Astoria, it's hard to see how Microsoft can make inroads against Apple and Alphabet without a sizable base of apps with which to attract users. In one prominent example from Microsoft's contentious shareholder meeting, one attendee asked why Microsoft still lacks a Starbucks app for its smartphone ecosystem. Ballmer has a point.

Of course, this is only a single example, but it speaks to the meaningful gaps Microsoft faces in mobile, a situation that Project Astoria was supposed to help remedy. So with Project Astoria's recent delay and possible death, Microsoft's mobile comeback plans against Apple and Alphabet appear even more distant than they did even several weeks ago