Netflix Inc (NASDAQ:NFLX) hit another all-time high earlier this week, but the stock promptly retreated after the company presented at a UBS conference on global media. Netflix's chief of content, Ted Sarandos, said it was having difficulty securing rights to global content as it expands internationally. The development comes as content creators, often traditional media enterprises bound in the cable bundle, are realizing they may be undervaluing their own assets by shipping them off to the red-lettered streamer, and at the same time hastening the cord-cutting phenomenon.

Sarandos made another telling announcement as well, saying that the company would essentially double its output of original programming next year. It will release 31 scripted shows in 2016, up from 16 last year, along with 12 documentaries, 10 stand-up specials, 10 feature films, and 30 kids shows.

All that original programming comes at a cost, and it's a major reason why the company's free cash flow has plummeted into the red over the last year, even as the stock price has soared. 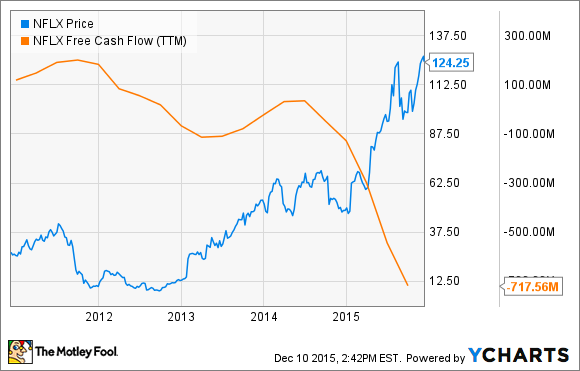 The number of Netflix's original shows next year makes it more prolific than the major networks, indicating that Netflix intends to be the dominant force in original TV as well as home entertainment. CBS, by comparison, has just 19 shows on primetime this season.

Inside the black box
Netflix claims that its original shows, which include hits like House of Cards and Orange is the New Black, are as popular as the top shows on TV, but the company doesn't release metrics on viewership as it doesn't want to divulge information that could drive up prices for content as media companies might charge more if they knew their shows were well watched. Nielsen has begun measuring viewership of streaming services like Netflix, but it's an incomplete count as it doesn't include mobile devices or overseas viewers.

Other ratings could serve as a better proxy for Netflix's shows' popularity. According to Rotten Tomatoes, the popular movie and TV-rating site, many of Netflix's originals are hits. Master of None, the new comedy starring Aziz Ansari, receives 100% rating, while Jessica Jones rates 92%. The two shows are also listed on the top 13 shows on TV right now. Rival Amazon.com (NASDAQ:AMZN), however, has three, including The Man in the High Castle, Transparent, and Catastrophe.

Some of Netflix's shows have been panned by critics, notably Marco Polo, but the vast majority seem to be well received by viewers.

Quality over quantity
Netflix has deliberately cast a wide net with its original programming, launching animated shows like Bojack Horseman, medieval thrillers, and comedies about older women. But viewers have demonstrated they are willing to pay up for quality. Time Warner's (NYSE:TWX) HBO has developed a stellar reputation for its programming, and is regularly a big winner at the Emmy Awards.  That reputation has enabled HBO to charge its streaming customers $15/month, while most of Netflix's domestic customers are paying just $8/month.

While Netflix is launching 31 scripted series next year, HBO only has 11 this year -- but those include smash hits like Game of Thrones and True Detective. The leading premium network also offers news and sports programming, unlike Netflix, further differentiating itself.

Netflix has a bigger audience than HBO, but HBO is able to command a higher premium. That may signal that Netflix needs to improve its programming quality in order to match HBO, which would give it more pricing power and boost its bottom line.

As the awards season gets rolling, Netflix also got a vote of confidence from the Screen Actors Guild and Golden Globe nominations, which were just announced. House of Cards was a big winner at the SAG nominations, while Netflix captured eight nominations at the Golden Globes, more than any other network, including one for Narcos for best TV drama and Orange is the New Black for best TV comedy.

Netflix's originals strategy appears to be taking hold, and there's evidence of its quality and popularity. As the company doubles its original programming, it's staking its future more than ever before on its own content. As its audience grows, Netflix should become an even more appealing outlet for big-name actors and directors, helping draw in new viewers and adding value to the service. The risks are there, but the recent accolades indicate there is plenty of growth left ahead for Netflix.