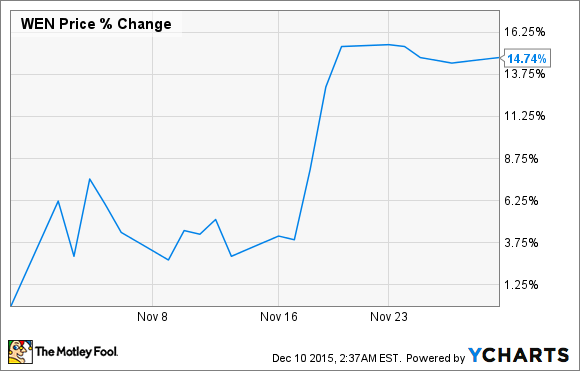 So what: Wendy's third quarter revenue and earnings both came in ahead of Wall Street expectations, as the fast food chain continues to benefit from its transition to a predominantly franchised model.

Wendy's is also improving the profitability of its restaurants, with restaurant operating margin increasing 330 basis points compared to the year-ago quarter. That has allowed the company to increase the earnings contribution from its company-operated restaurants by 11% year-over-year, even though it owned 153 fewer restaurants relative to last year.

Now what: Based on Wendy's strong operating results so far in 2015, as well as the positive early results from its 4 for $4 promotion, management now expects 2015 same-store sales, adjusted EBITDA, and adjusted earnings to come in at the high end of its guidance.

Wendy's also remains on track to reach its goal of reducing company-owned restaurants to 5% of its total store base by 2016, with management projecting 540 locations will be sold this year and next. The sale of these restaurants should help to further reduce costs and boost companywide margins, while also freeing up more capital that can be returned to shareholders in the form of dividends and share buybacks.

All told, this combination of growth, asset sales, and capital returns makes Wendy's an interesting business in the restaurant sector for investors to consider.