IMAX could see a big payday from Star Wars: The Force Awakens. 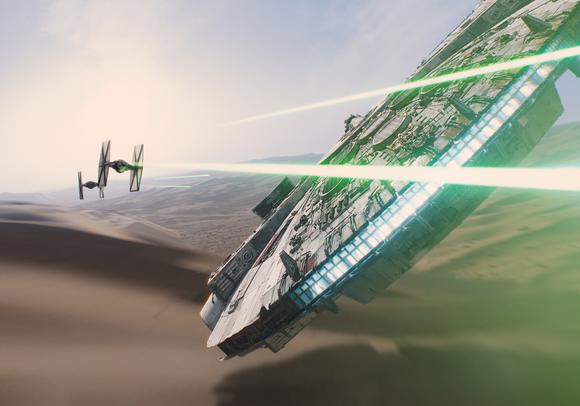 Star Wars could be a huge hit for both Disney and Imax. Image: Disney.

Every few years there's a movie event that's perfect for the massive IMAX (IMAX 1.07%) format. This year that perfect movie could be Star Wars: The Force Awakens, the Disney film that could break box office sales records around the world.

For IMAX, this is the biggest event since Twenty-First Century Fox (FOX) released Avatar in 2009. And it may set up a series of huge years for the big screen theater company.

How big could Star Wars be in IMAX?
Avatar was the biggest movie we've ever seen, grossing $2.8 billion at the box office worldwide. And if predictions of a potential record breaking opening weekend are true we could see the film break Avatar's box office records. For IMAX, that could be a huge windfall after nearly quadrupling their network over the past six years.

We know that IMAX commanded over $200 million of Avatar's $2.8 billion in box office on just 263 screens worldwide in 2009/2010. We also know that IMAX averages 12.7% of the box office of its movies and can command 17% when scenes are shot in IMAX, as some of Star Wars: The Force Awakens was. In the table below I've shown what the IMAX box office would be if the movie generates $2 billion or $4 billion (a stretch goal) in total box office and averages 12.7% at IMAX. Keep in mind that these are estimates and could go up or down depending on how the movie plays out. But for IMAX the potential is big.

IMAX doesn't get to keep all of the box office revenue generated in its theaters, but it keeps a significant slice. IMAX gets 10%-15% is direct revenue from the studio for converting the film into IMAX (DMR) and joint revenue sharing agreements add to that, which so far in 2015 has generated nearly as much revenue as production and DMR ($67.3 million to $75.1 million).

In the third quarter, $189.8 million in box office sales generated $40.7 million in revenue and $26.1 million in gross margin. Star Wars: The Force Awakens could generate double that much revenue by itself if either the film is a big hit or IMAX takes a larger share of the gross than I've outlined above.

More IMAX hits are coming
While investors should expect Star Wars: The Force Awakens to be a hit, these hits will keep coming. Three more Avatar films and three more Star Wars movies are expected in the next three or four years. These may be one-time windfalls for IMAX but when they come so regularly it's hard not to see them as a recurring source of revenue.

IMAX may be the surprise winner of the box office this holiday weekend if Star Wars: The Force Awakens is as big as people hope. And it could set the stage for the stock's resurgence with more Star Wars and Avatar revenue on the horizon.

Travis Hoium has no position in any stocks mentioned. The Motley Fool owns shares of and recommends Imax and Walt Disney. We Fools may not all hold the same opinions, but we all believe that considering a diverse range of insights makes us better investors. The Motley Fool has a disclosure policy.