Hedge funds are supposed to be the smartest investors in the world, right? They're paid millions, if not billions, to find and invest in the deals that no one else sees. The only problem is that even these elites of the investing world don't always get it right.

For the 12 months ending in October, which is the most recent data available as of this writing, hedge-fund strategies are up just 3.09% across the board compared to 3.04% for the S&P 500. For the investors widely considered the smartest on Wall Street, simply matching the S&P is an underwhelming result.

Hedge funds focusing on North America have a net return of even less, 2.73%, but they aren't the worst of all. That honor goes to the funds specializing in the emerging markets, which have posted a negative 0.3% return over this same period.

Hedge fund performance has gotten worse as the year has gone on, tracing the tough summer that was seen more generally across all equity markets. 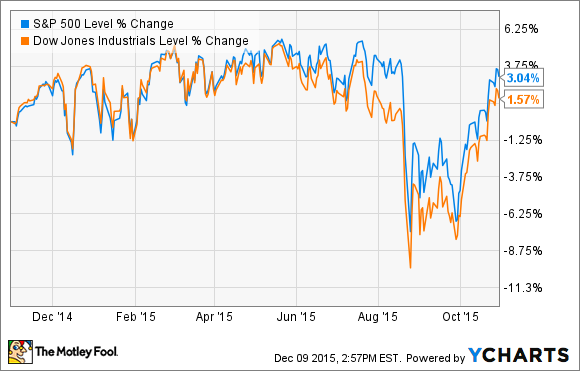 Every month from June to July of this year, the hedge-fund industry reported negative monthly returns, the longest streak since the June to November months of 2008. With that tough environment as context, a few big-name hedge funds have performed much worse than their average competitors. Here are three worth noting.

The bad news may be getting worse for Einhorn, with the recent announcement that Keurig Green Mountain Coffee Roasters (NASDAQ:GMCR.DL) is to be sold to a group of private investors. The fund held a short position in Keurig at an average cost of $102. Before the announced takeover, that bet was nearly 50% in the black for Einhorn and Greenlight.

However, with the acquisition priced at a 78% premium to the stock's price, the deal all but wiped out what was Einhorn's third-best investment of 2015. We'll have to wait until the fund's next regulatory filing, or until he makes public comment on the news to find out if the fund lucked into selling the position before the news broke, but early indications are that what was a home run may now just be a base hit.

The decision to close the fund came after a 5% decline in September. The company then announced that fund manager Mike Novogratz would be stepping down and cashing out his equity in the publicly traded management company for more than $250 million.

Novogratz said, "I do not believe the current environment is conducive to achieving our best results." In this case, investors lost nearly 18% on their cash, while he walks away with a quarter of a billion dollars. It's debatable which "best results" he's referring to -- his own or his investors.

A number of big bets have turned sour for Ackman and company, including Valeant Pharmaceuticals (NYSE:BHC), which is down 35% year to date. Ackman has publicly defended the company, but even his efforts haven't overcome the ongoing scandal related to alleged accounting improprieties and abusive practices.

Likewise, Ackman's continuing $1 billion short of supplement company Herbalife (NYSE:HLF) has also been a particularly bad investment this year. Pershing alleges that Herbalife is a pyramid scheme, and should be shut down as an illegal business. Thus far, regulators and the market have disagreed: Herbalife is up 47% year to date, and is up 65% since Ackman first announced his short on December 20, 2012.

2015: A dose of hedge-fund reality for investors
Investing in hedge funds is out of reach for most retail investors. We just don't have the fat checkbooks to even get our foot in the door. But with returns like these, and sky-high fee structures, that reality may just be a blessing in disguise.