Investing in the right companies over the long term can do wonders for your portfolio. Like Warren Buffett once said: "Time is the friend of the wonderful company, the enemy of the mediocre." With this in mind, in the following roundtable our contributors highlight three particularly promising investment ideas in stocks to hold for the next decade.

Andres Cardenal: The Internet of Things will most likely be one of the most exciting trends in the tech industry over the coming decade, and Sierra Wireless (NASDAQ:SWIR) is in a privileged position to benefit from this extraordinary opportunity.

Devices around the world, whether it's a smartphone, an industrial machine, or a security camera, among countless others, are becoming increasingly interconnected via Wi-Fi and similar technologies. According to data from Deloitte, approximately 1 billion wireless connected IoT devices will be shipped in 2015, a big increase of 60% versus 2014, and bringing the installed base to 2.8 billion devices. IDC calculates that the total economic impact of the IoT could be between $3.9 trillion and $11.1 trillion per year by 2025. 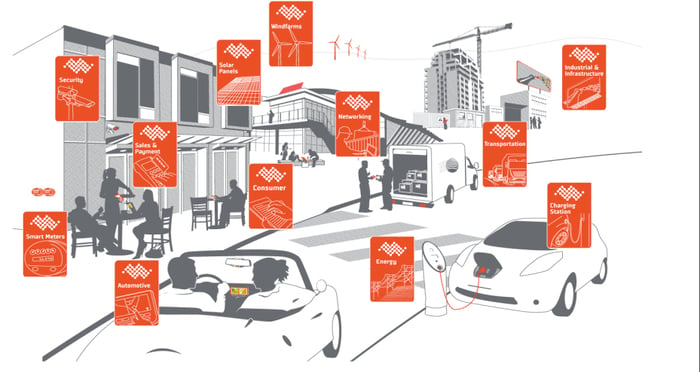 Sierra Wireless is a global market leader in the hardware and software that's making IoT connections possible. Not only that, the company is a pure play in the industry, and it's still relatively small, with forecasted sales around $613 billion for 2015. This means Sierra Wireless could deliver exponential growth in the years ahead on the back of booming demand for IoT devices.

The stock is down by 65% from its highs of the year, mostly due to disappointing sales last quarter because of temporary headwinds in 4G-enabled enterprise notebooks. On the other hand, the long-term growth story in Sierra Wireless remains pretty much intact, so the short-term dip looks like a buying opportunity for long-term investors.

Dan Caplinger: The energy market has gotten crushed lately, and Kinder Morgan (NYSE:KMI) has been among the dozens of energy companies that have seen their shares fall sharply over the past year.

Most recently, Kinder Morgan decided to reduce its dividend by 75%, with the goal of conserving cash and maintaining the ability to take advantage of the tough conditions in the industry to capitalize on unique long-term opportunities. Investors had sold off the stock in anticipation of a dividend cut, but when it actually happened, Kinder Morgan regained some of its lost ground.

Kinder Morgan is far from risk-free, as the company is now facing the potential of a bond downgrade that could send its credit rating down to junk bond status. Nevertheless, with the stock having lost a third of its value in just a week's time, investors are clearly panicking that worst-case scenarios for the energy market will play out. Given time, the ongoing need for energy should give Kinder Morgan a chance at huge returns as long as it can survive the current crisis in the industry, and the company's leadership position in energy should give it a good chance of doing so and securing rewards for shareholders.

Matt DiLallo: Global mobile data traffic is skyrocketing and is expected to more than triple by 2018, according to IT research company Gartner. That demand growth is making it tough for wireless companies to keep up. They need to continually reinvest in their network to keep up with consumer demand, so that they can retain those customers. It's not an easy task, which is why wireless companies are increasingly turning to global tower companies like American Tower (NYSE:AMT) to keep their networks growing.

American Tower has a very simple game plan. It serves as a landlord for wireless companies by leasing space on its towers for their communications equipment. This arrangement saves wireless providers precious time and capital because they don't have to build or manage the towers themselves.

What makes American Tower such a compelling long-term opportunity is its ability to win in two ways. Not only can it build or buy towers directly from wireless companies to drive growth, but it can add new tenants to each tower. It's that second stage of growth that really ramps up its returns, with each new tenant exponentially growing its return on investment. And, with a tower portfolio consisting of more than 99,000 communication sites around the globe that only averaged 1.3 tenants per tower over the past year, the company's embedded organic growth is very exciting.

With mobile data growth still in its infancy, American Towers offers a great way to profit from this trend over the next decade.