With the holiday season rapidly approaching, investors might not be thinking all that much about their stock portfolios right now. Our contributors, though, believe that these seven stocks, which span a wide diversity of industries and market caps, are worth taking the time out of your busy holiday schedule to check out. Read on to find out which stocks they are hot on this month, and why they think they might be great additions to your portfolio.

Tyler Crowe: One stock that looks especially intriguing is rig owner Helmerich & Payne (NYSE:HP). The company leases rigs to producers and oil-services companies to drill wells. The decline in oil prices and drilling activity across the U.S. has weighed heavily on the stock over the past 18 months, but that may be the reason to buy shares today. 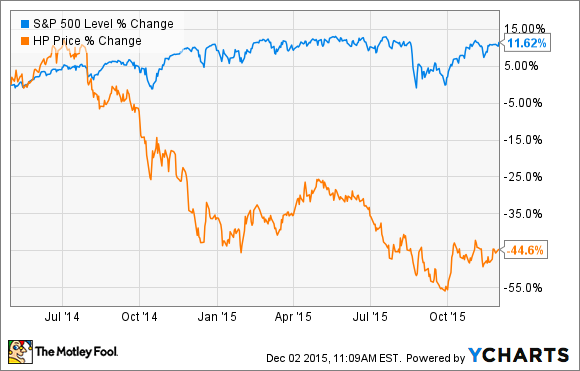 Unlike many other rig companies that took on large debt loads to build out fleets of rigs that are capable of handling modern drilling techniques, Helmerich & Payne has funded its fleet turnover with internally generated cash flows. This approach has left the company with a clean balance sheet that isn't weighing on the stock, as other companies in the space are experiencing. Also, Helmerich & Payne has the largest fleet of modern rigs that have the horsepower and technical capabilities to do shale drilling. As more and more oil and gas production comes from shale formations, demand for these particular types of rigs will increase, and those not capable of meeting shale's demands will fall to the wayside.
It's hard to say when oil and gas prices will increase and bring with it higher drilling activity, so investors may need to be a little patient with this stock. The nice thing is this Dividend Aristocrat will pay a 4.8% dividend yield while you wait for the market to turn.

Steve Symington: CalAmp Corp. (NASDAQ:CAMP) stock skyrocketed more than 25% in the week following its impressive quarterly results in early October. But shares of the machine-to-machine communications specialist have gradually given back some of those gains since then, presenting opportunistic investors with a chance to pick up shares while we're still in the early pages of CalAmp's long-term growth story.

CalAmp is enjoying impressive growth from its core Wireless Datacom business, where revenue increased 23% year over year last quarter to $61.8 million. For that, CalAmp credited solid demand from asset tracking customers, and its strongest-ever quarter for fleet management product sales. Recurring subscription revenue also climbed to 15.9% of total sales, up from 15.6% in the prior quarter, demonstrating progress in building a more predictable, sustainable revenue stream.

Regarding longer-term initiatives, CalAmp management also confirmed that it's making "excellent" progress commercializing key intellectual property from the previous acquisition of insurance telematics company Crashboxx, and last month it announced a strategic seed investment in technology and insurance start-up SmartDriverClub to help foster this key growth market. Keep in mind that this also partially fulfills a previous promise to put to use $152 million in proceeds raised earlier this year through a convertible note offering pegged for exactly these kinds of transactions.

If CalAmp can keep riding these tailwinds and secure its central role as the Internet of Things gains steam -- and with shares still trading at an attractive 14.4 times next year's estimated earnings -- I think patient investors who buy CalAmp stock this month will be more than pleased with their decision.

Brian Feroldi: This has been a year to forget for investors in Biogen (NASDAQ:BIIB). While the company's stock started off the year with a bang, it's been all downhill since springtime, and shares are now down more than 40% from their highs. With a sell-off like that, you'd assume that Biogen's financials would be in rough shape, but the company continues to report revenue and profits that are growing by double digits. So why have investors soured on the shares?
Investors appear to be concerned that the company's current product lineup isn't growing fast enough and that its pipeline won't produce the growth needed to justify its former lofty valuation. Biogen also recently announced that it will be terminating a handful of its advanced clinical programs and that it will lay off 11% of its workforce. That's not exactly a confidence booster.
While things are certainly not perfect, there are plenty of reasons to be optimistic about Biogen's future. Biogen has been ramping up its spending on a direct-to-consumer campaign for Tecfidera, one of its best-selling multiple sclerosis drugs, to rejuvenate sales growth. Biogen also boasts a pipeline full of many promising drugs in late-stage development, and the company has been using its financial might to furiously repurchase its own shares recently.

Each of these moves should certainly keep the bottom line growing in the years ahead, and analysts are still expecting Biogen to grow its profits by more than 15% per year for the next five years, which is a strong growth rate for a company currently priced only around 15 times its 2016 earnings estimates.

Andres Cardenal: Baron Rothschild is credited with saying that "the time to buy is when there's blood in the streets." The streets of Macau aren't tainted with blood, but there is a lot of negativity when it comes to investing in Macau casinos nowadays. For investors with a long time horizon, this could be creating an attractive buying opportunity in Las Vegas Sands (NYSE:LVS) stock.
Because of increased government restrictions and regulations, tourist traffic and gambling demand in Macau are under heavy pressure. According to official statistics, gambling revenue in Macau has declined for the past 18 consecutive months, with revenue falling 32% year over year during November.
This is a considerable drag on Las Vegas Sands, since the company makes most of its sales and earnings from Macau. On the other hand, the problem should be temporary, and Las Vegas Sands stands to profit substantially from the rise of the Chinese middle class and growing demand from Macau over the years ahead. Gambling is a remarkably profitable industry, and Las Vegas Sands is the undisputed leader in Macau, arguably the most promising gambling market in the world.


Importantly, Las Vegas Sands stock is paying a big 5.8% dividend yield at current prices. While investors wait for the situation in Macau to improve, they're being rewarded with big cash distributions from the company.
Dan Caplinger: The athletic-apparel craze has taken the world by storm, and Nike (NYSE:NKE) has retained its leadership role in the industry despite rising competition from fast-growing smaller upstarts. By using its superstar-driven endorsement strategy to support its business model, Nike has built a presence in every major sport across the globe. Moreover, the athletic specialist aims young, seeking to get student athletes into its products at the earliest age possible to help build a lifetime of loyalty. Those efforts have made the Nike brand into one of the most valuable in the world.

Nike is a particularly interesting stock for December because the Dow component will report its fiscal second-quarter results later in the month. Investors expect that the strong dollar will continue to hold back Nike's sales growth from its typical double-digit percentage pace, but they're still optimistic that rising earnings will keep the stock on its upward path. For now, it seems as though there's enough room for both Nike and its smaller rivals to share in the rapid expansion in the industry among fitness-seeking customers. As long as that trend lasts, Nike should be able to keep making its impression as the longtime leader in athletic footwear and apparel.

George Budwell: The stock that's high on my list this month is Botox maker Allergan (NYSE:AGN). Besides the fact that Allergan's stock is already trading at a 15% discount relative to the announced tender offer from Pfizer, I think this company is a compelling buy because it offers investors strong sales growth with limited downside risk.

Specifically, Allergan is expected to post a noteworthy 41% increase in annual sales in 2015, according to S&P Capital IQ. And the best part is that this incredible amount of growth is being generating by several products, including Botox, Restasis, Namenda XR, and Linzess, among others -- giving the company a well-diversified growth platform.

Looking ahead, Allergan is poised to divest its generic-drug unit to Teva Pharmaceutical Industries Ltd. in Q1 of 2016 and complete the merger with Pfizer sometime in Q3. While the divestiture of its generic-drug business is projected to cause total sales to slump to a small degree next year, Allergan's earnings are still expected grow by around 4% because of an overall streamlining of its operations.

Now, the merger agreement is obviously the elephant in the room. However, I think Allergan's core business should be strong enough to produce market-beating returns -- with or without the deal.

Tim Green: Shares of toymaker Mattel (NASDAQ:MAT) have tumbled over the past few years, with the stock down nearly 50% since the beginning of 2014. The company's brands, which include Barbie, Hot Wheels, and Fisher-Price, are well-known and time-tested, but sales have been slumping, and Mattel's net income over the past 12 months is about two-thirds lower than it was in 2013. According to The Wall Street Journal, Mattel has lost about 20% of its shelf space at the largest U.S. retailers because of its prolonged sales slump and dearth of big hits.

A major part of the problem for Mattel has been a company culture that stifled creativity. Bureaucracy, endless meetings, and decisions made with only the bottom line in mind have created a company unable to quickly adapt. As Mattel has struggled, privately held Lego has grown into a behemoth, and rival Hasbro has been scooping up market share, thanks in part to its toys based on Frozen and Star Wars.

Under a new CEO, Mattel is looking to turn itself around. The company is trying to get new products to market faster, with a renewed emphasis on creativity. One such effort is Hello Barbie, a talking version of the iconic doll that uses speech-recognition technology to converse with the user. The good news for Mattel is that global toy sales have been strong so far this year, growing by 7% through September, according to NPD. Mattel hasn't enjoyed the spoils of this growth so far, but the company is taking the necessary steps to right the ship. All of Mattel's problems are self-inflicted and fixable, and while a turnaround will take time, patient investors can take advantage of Mattel's depressed stock price in December.