Late last month, Japanese publication Nikkei Asian Review broke the news that Apple (NASDAQ:AAPL) plans to adopt OLED-based displays for its iPhones beginning in 2018. Such displays offer a number of advantages over the liquid crystal display technology currently found in Apple's iPhones such as improved contrast ratios and reduced device thickness (since OLEDs do not require a backlight).

In this article I'd like to show why I completely believe the latter report. After showing that, I will explain why Japan Display being able to successfully manufacture OLEDs makes it much more believable that Apple will adopt the technology.

Japan Display has been pretty clear that OLEDs are next up 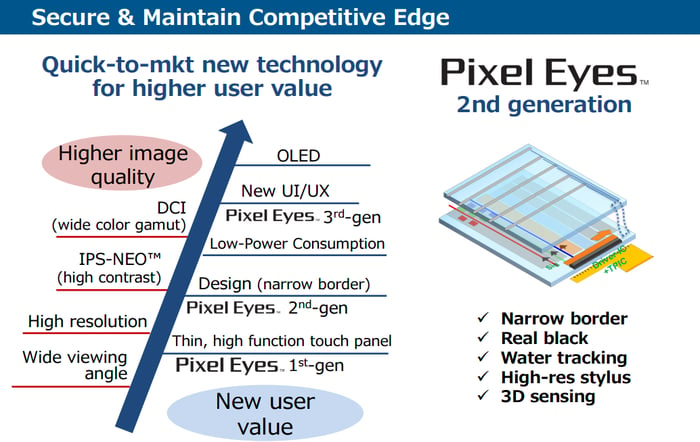 Notice on the right that Japan Display describes the first generation Pixel Eyes displays (I believe Apple uses this technology or some variant in the iPhone 6 and 6s family of products) as "thin, high function."

These displays, however, should still be traditional liquid crystal displays.

What's interesting is that if you look at the slide, you'll see that Japan Display's third generation Pixel Eyes technology are described as using OLEDs (which in turn, per the slide, should enable new user interfaces and experiences).

With Apple's main display vendor saying that next up in its product pipeline are OLED-based displays, it's quite difficult to imagine that the iDevice maker will stick with LCDs when it introduces its 2018 iPhone.

Why Japan Display hopping on board the OLED train is good news for Apple OLED adoption
Apple's annualized iPhone shipments are now well past the 200-million mark, with iPhone sales making up the bulk of the company's revenue and an even larger portion of its gross profit dollars. In order to minimize supply chain risks (and to keep component prices as low as possible), Apple surely wants to have multiple sources for key components if possible.

Two suppliers are certainly better than one, but if Japan Display enters the fray, Apple will be able to play no fewer than three suppliers off of each other to get good component prices. Further, since Japan Display is an independent display maker without in-house smartphone efforts that compete directly with the iPhone (as LG and Samsung do), Apple might find it more "comfortable" to deal with Japan Display than with either Samsung Display or LG Display.

1 More Clue That Apple Inc. Will Use OLED Displays in the iPhone 8 @themotleyfool #stocks $AAPL $LPL Next Article
Current