eBay (NASDAQ:EBAY) is having a strong 2015. Shares of the e-commerce platform have gained more than 20% over the past 12 months. Even better, eBay stock still looks attractively valued at current prices, so 2016 could be a big positive year for investors in the company.

eBay looks undervalued
Even after delivering impressive gains over the past year, eBay stock is still priced at attractive valuation levels. The company carries a forward price-to-earnings ratio around 14.4 times forecasted earnings, a significant discount to the average company in the S&P 500 and its forward P/E in the neighborhood of 18.5.

eBay comes well behind Amazon.com (NASDAQ:AMZN) in e-commerce, but the company is still one of the top players in a remarkably exciting growth industry. According to official statistics, e-commerce is rapidly growing its share of overall retail sales, yet online still represents a modest 7.4% of all retail transactions in the U.S., so the industry offers substantial room for expansion in the years ahead. 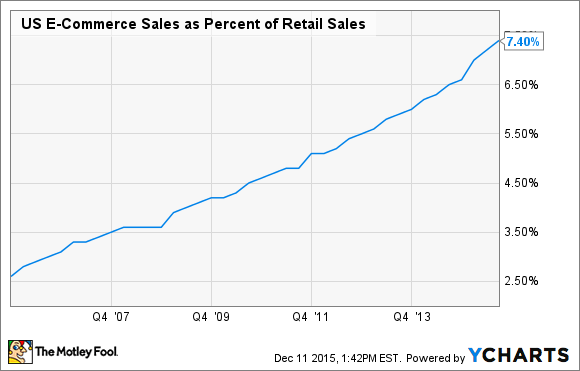 eBay has reached considerable scale. The company has 159 million active buyers in its platform as of the third quarter, a 5% year-over-year increase. This growth says a lot about the company's staying power and overall relevance in the e-commerce industry. What's more, while many bricks-and-mortar retailers consider Amazon a dreaded competitive threat, eBay intends to be an e-commerce facilitator allowing traditional retailers to join the e-commerce revolution with a simple and effective solution.

eBay is in the business of matching buyers and sellers of all kinds of products, as opposed to being an online retailer. That means the business model has practically no associated cost of inventory in every sale, and eBay makes big profit margins in the area of 30% of revenue at the operating level.

Keeping in mind that eBay is an important player in the promising e-commerce business and that the company's business model generates above-average profitability, there is no obvious reason for eBay to trade at such a big discount to the average stock in the market.

Why is eBay so cheap?
eBay is still trying to fully recover from the password-security breach and the changes in Google's search algorithm that inflicted considerable damage to the business last year. According to CFO Scott Schenkel: "The actions that we've taken to reduce friction in the password reset and sign-in process have reduced our existing buyer churn. However, the SEO headwinds continue to impact our ability to acquire new buyers."

In addition, Amazon is the undisputed king in terms of both size and growth in e-commerce, and the company is well known for its relentless competitive drive. Amazon is much bigger than eBay, as it's projected to produce $107.2 billion in revenue during 2015 while eBay is forecasted generate total sales in the neighborhood of $8.6 billion. The e-commerce juggernaut is also growing at a much faster rate. Amazon's revenue in constant currency grew 30% in the third quarter of 2015, while eBay announced a much more moderate increase in constant currency revenue of 5% during the period.

The separation between eBay and PayPal (NASDAQ:PYPL) is, moreover, fairly recent. Both companies have traded independently from each other since July. One of the main reasons behind the decision to split the businesses is that PayPal is growing at a much faster rate than eBay, and many investors were eager to invest in PayPal without having eBay as a drag on overall company-level performance.

Academic research has proved that spinoffs tend to be fertile ground for investors hunting for undervalued opportunities, and it's not a stretch to assume that many investors could be underestimating eBay's marketplace business after the PayPal spinoff.

Amazon and PayPal are attracting more attention than eBay among growth-hungry investors, but that doesn't mean that eBay is a lousy investment. On the contrary, eBay stock is cheap enough that it could deliver considerable gains for investors in 2016 if management keeps leading the company in the right direction.