Apple, Alphabet, and Priceline are three remarkably promising tech stocks for 2016 and beyond.

The technology sector is home to many of the most dynamic growth companies around, and investing in top-quality tech names can be remarkably profitable for investors. Even better, sector leaders such as Apple (AAPL -0.14%), Alphabet (GOOG -0.55%) (GOOGL -0.61%), and Priceline (BKNG -1.14%) look well positioned to continue delivering substantial gains in 2016 and beyond.

Apple
Apple is entering a crucial period in 2016. Wall Street analysts are expecting a big slowdown in growth next year, and Apple stock is priced at cheap levels due to these unassuming forecasts. If Apple proves that it can do better than expected, investors in the company should be handsomely rewarded over the coming year.

Wall Street analysts are on average forecasting that Apple will deliver a lackluster sales increase of only 3.7% during the quarter ending in December 2015. For fiscal year 2016, analysts expect a similar year-over-year sales increase of 4.7%. As a reference, Apple announced a huge jump in sales of 22% for the September 2015 quarter, so Wall Street projections are suggesting a steep deceleration in growth in the coming months.

The smartphone industry is maturing across the board, and no company is completely immune to industry trends. Besides, Apple had an explosive success with the iPhone 6 and iPhone 6 Plus models last year, and the company will hardly repeat that kind of growth with the iPhone 6s and iPhone 6s Plus in 2016. With this in mind, chances are that growth will clearly decelerate in the middle term.

Even better, Apple is gaining market share in smartphones lately, and CEO Tim Cook believes that market-share gains could drive sales growth in the middle term. According to Cook: "We believe that iPhone will grow in Q1, and we base that on what we are seeing from a switcher point of view. We recorded the highest rate on record for Android switches last quarter at 30%."

Investors in Apple stock are entering 2016 in a comfortable position. If growth slows down, then this was widely already incorporated into its valuation. On the other hand, if Apple does better than expected on the back of market-share gains, then Apple stock could deliver big gains from current price levels.

Alphabet
Alphabet is an undisputed leader in online advertising, an industry offering extraordinary potential for growth in the years ahead. According to estimates from eMarketer, Alphabet owns a gargantuan market share of nearly 55% in online search advertising thanks to the dominant position provided by its Google search engine. Alphabet has six different services and applications with over 1 billion monthly users, those are: Google Search, Android, Maps, YouTube, Chrome, and Google Play.

The business is performing remarkably well from a financial point of view. The company delivered $18.7 billion in revenue during the third quarter of 2015, a year-over-year increase of 13%. In constant currency terms, the increase in sales was an even stronger 21%. The business model is remarkably profitable, Alphabet generates an operating profit margin in the neighborhood of 25% of sales on a GAAP basis, while adjusted operating margin was 33% of revenue last quarter.

All this comes for a fairly reasonable price. Alphabet stock trades at a forward price-to-earnings ratio around 22 times earnings forecasts for 2016, a moderate premium versus the average company in the S&P 500 index and its forward price-to-earnings ratio of 18.5. Alphabet is far superior to the average company in the market, so investors have solid reasons to expect attractive returns from the company in 2016.

Priceline
Priceline is the global leader in online travel services, meaning the platforms that provide access to hotel bookings, flights, and car rentals via web and mobile applications. The company has a big presence in Europe, a key destination for travelers from all over the world.

This global exposure is a major advantage for Priceline over the long term, but the euro and other international currencies are depreciating versus the U.S. dollar lately, and this is hurting the company's financial performance when expressed in dollars. In addition, growing concerns about international terrorism could hurt travel demand, affecting Priceline's performance in the coming months.

Macroeconomic trends and geopolitical risks are important factors to watch, but these are still external and transitory variables. Business conditions change over time, but Priceline is in a position of strength to profit from booming demand for online travel services in the years ahead. 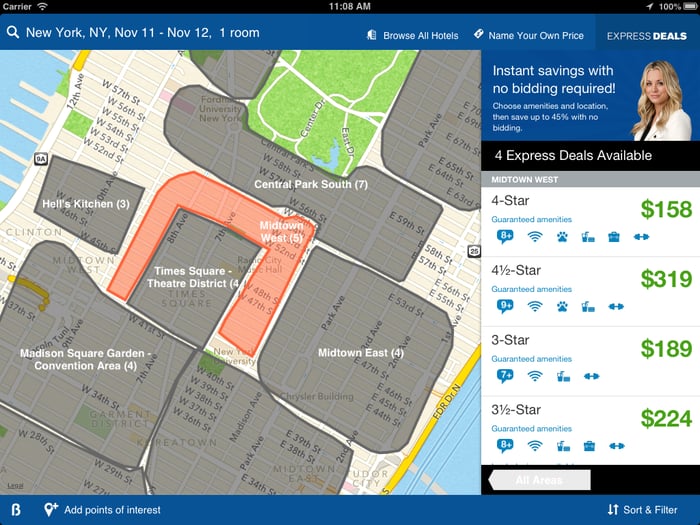 Even under challenging conditions, Priceline delivered a big increase of 29% in gross travel bookings on a constant currency basis during the third quarter. The company's accommodation business booked 116 million room nights in the quarter, an increase of 22% from the same quarter last year. Based on data for the third quarter, Priceline's Booking.com has over 380,000 properties in its platform, an anual increase of 38%.

Priceline stock is trading at a forward price-to-earnings ratio around 18, roughly in line with the average company in the S&P 500. This sounds like a decent price to pay for a high-growth company leading the online travel revolution.