After over a year of touting its logged-out audience, Twitter (NYSE:TWTR) is starting to test monetization of visitors to its website that aren't logged into an account. The market cheered the announcement, sending its shares climbing 6.6% on the day of the announcement. 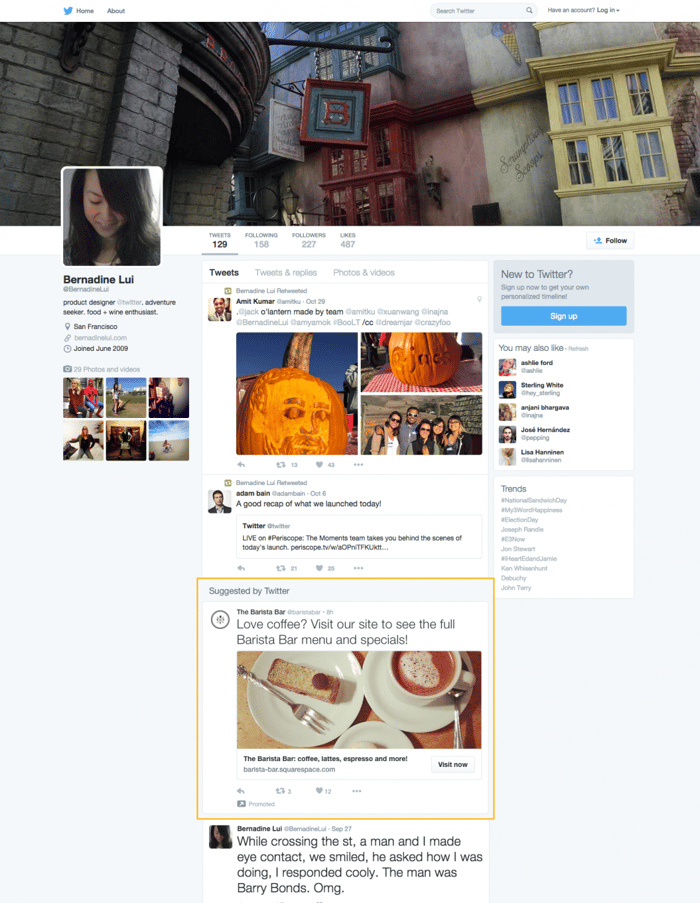 But that kind of reaction to announcing a test for advertising seems a bit overblown, even if the market encompasses more than 500 million previously unmonetized visitors. That's especially true for investors that have been paying attention to what management has been saying all along.

We already knew this was going to happen
The market action on Twitter is surprising considering that anyone who's been paying attention to Twitter knew that this was going to happen at some point this month. COO Adam Bain told investors during the company's third-quarter earnings call that it would "begin to run a pilot here in Q4 for on-Twitter logged-out monetization."

With the fourth quarter closing out in a few weeks, investors should have known this announcement was imminent.Two days prior to the announcement, in fact, CFO Anthony Noto told analysts at the Barclays Global Technology Brokers Conference (emphasis mine) that: "The 500 million plus logged-out users, we have begun beta-testing those users. We are now going to be targeting these users based on context."

He practically let the news slip before the company was ready to officially announce it.

This goes to show that it pays to pay attention to what management says, as they not infrequently offer insight into what's happening behind the scenes. To this end, Twitter stock moved down the day after Noto's comments, which were buried within a larger interview. An attentive investor could have gotten Twitter at a discount compared to where its stock price emerged after digesting the news.

Assuming the market just missed these cues, did it still overreact?
In November 2014, Noto told analysts that Twitter believes it can monetize logged-out visitors at half the rate it monetizes active users. That's optimistic considering the wealth of data on its users is significantly larger than the context clues it can gather for logged-out visitors. Still, Bain iterated on the company's third-quarter earnings call: "What we've learned so far doesn't allow us to deviate from what we said previously in terms of what we think the opportunity exists in terms of logged-out users."

If that's the case, then Twitter could nearly double its existing ad revenue from its 307 million monthly active users. The market's reaction would thus be appropriate if not underwhelming, as the profit margin on those additional ad impressions would be high. There's no additional customer acquisition costs, and the additional cost for ad sales is minimal.

Management has a fiduciary duty to provide estimates as accurately as possible, so it doesn't seem unreasonable to assume that Twitter's executives wouldn't be touting a number like this if they didn't think it was feasible. But executives in the ad industry are nevertheless skeptical.

I think the best case scenario is that Twitter could monetize those logged-out users at half the rate of active users over the long run, but it will take time and experimentation to get things right.

Consider that Twitter is still working to maximize revenue from its core audience, being careful with how many ads it places in timelines and how it targets advertisements to users. Investors should expect the same deliberate approach when it comes to monetizing logged-out users.

And considering that Twitter will only be able to use context such as what website a user came from and where they landed on Twitter, the company will also have to work with advertisers to show them the value they can provide. This means time spent getting businesses on board. What's more, that kind of targeting may only appeal to larger brands, requiring Twitter to work to increase spend per advertiser to maximize ad revenue from its logged-out audience.

Meanwhile, Twitter is still growing ad revenue from its core audience at a rapid pace. Ad revenue increased 60% year-over-year last quarter. Growth from Twitter's core will likely overshadow the small experimental income from Twitter's logged-out audience for some time, which makes the market's move look like more of a short term overreaction even though logged out monetization could become a meaningful revenue stream in the long run.

When the market overreacts to the potential slow start of logged-out visitor monetization, it could present another buying opportunity for investors bullish on Twitter.