One day after a massive sell-off across the energy shipping industry, investors are piling back in. 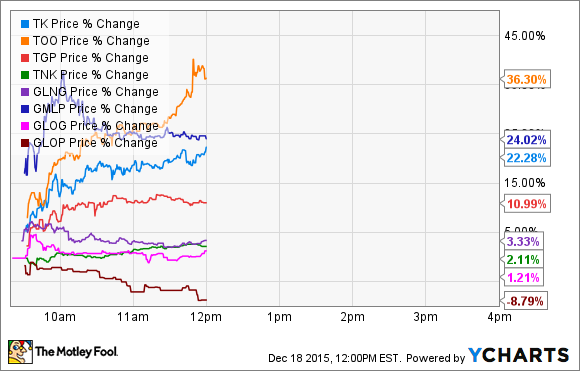 So what: If you missed it yesterday, Teekay and two of its three MLPs all slashed their dividends, sending the entire industry into a sell-off. GasLog and Golar, and the MLPs associated with them, were caught up in the wake of Teekay, as many investors clearly suspected that those companies would soon announce big dividend cuts of their own.

Golar LNG Partners was quick to respond, issuing an "operational update" press release, stating that its dividend policy was unchanged and that the board was approving a $25 million share repurchase program. And while Golar LNG itself didn't make a statement, the company announced its dividend plans less than three weeks ago, so there's little reason for management to say anything about the matter at this time, since the ex-dividend date has just passed, and the dividend will be paid in early January.

However, GasLog and its MLP have both remained silent, and that's likely the reason Mr. Market continues to sell off GasLog Partners shares today.

Now what: The market absolutely hates uncertainty worse than anything, and the move by Golar LNG to reaffirm the MLP's dividend policy has injected some certainty into the market. Furthermore, all of yesterday's selling was likely dividend investors racing each other to the door, while today's big jump is a combination of traders looking for some positive momentum after yesterday's sell-off and investors who saw the sell-off as a value opportunity.

However, the GasLog dividend "shoe" has yet to drop, so until there's an update from management on plans going forward, there will remain uncertainty around those two stocks -- meaning they'll likely be more volatile.

And even after today's big pop, the entire group of stocks energy shipping stocks is still well down in the past two days: 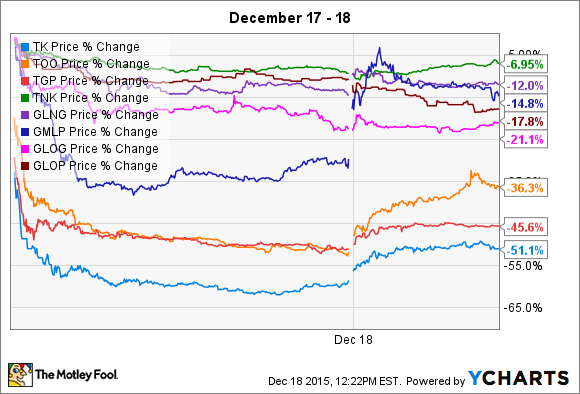 I plan to remain on the sidelines for now, but there could be some great value plays in the industry, even after today's jump. Where is the value? That's up for debate, but Golar LNG Partner's balance sheet, lack of major newbuild commitments, and solid backlog probably put it near the top of the list -- at least right now.