No. 1: An M&A deal boom, then bust
Cheap money has helped make this a record year for M&A as healthcare deals account for hundreds of billions in combinations. In the first nine months of 2015, Mergermarket reports there have been 268 pharmaceutical deals valued at a record $231.5 billion. That total surged higher in the fourth quarter because of Pfizer's (NYSE:PFE) $160 billion decision to merge with Allergan (NYSE:AGN) in November.

These deals have been done to build profit-friendly scale and accelerate commercialization timelines by reducing risky pre-clinical and early-stage research, but the concept of M&A as the new R&D may be coming to an end.

As rates increase and the cost of orchestrating deals becomes more expensive, look for fewer deals to pass muster with corporate pencil-pushers. While it will take more rate increases to get us to that point, the direction of rates could pull forward more deals in the short term, but ultimately lead to fewer deals over time.

However, rising short-term rates will make T-bills and short-term bonds more competitive, and that historically erodes demand for dividend-paying stocks, which are viewed as riskier.

If rates continue to climb, and the yield on the iShares 1-3 Year Treasury Bond (NYSEMKT: SHY) reaches levels that are competitive with the Market Vectors Pharmaceutical ETF (NASDAQ:PPH), then big pharmaceuticals stock returns will become increasingly tied to their business performance, rather than their dividend yield. 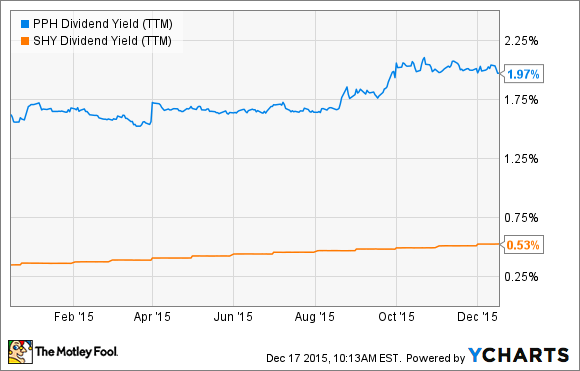 No. 3: Less funding for small cap biotech
Speculative small-cap companies tend to feel the biggest pinch when funding costs increase, and therefore, small-cap clinical-stage biotech may see the pool of funding dry up as small-cap returns come under pressure.

That may already be happening given that CB Insights and KPMG report funding for early-stage companies declined in the third quarter, marking the fourth quarter in a row that funding for young companies has slipped. Instead, more funding is heading to larger companies that may be less risky.

If rising rates lead to fewer new small-cap biotech start-ups, and cause performance headwinds for small cap stocks, then investors will want to spend extra time considering which clinical-stage biotech stocks are truly worth owning in their portfolios.

Historically, small-cap stocks feel the heat from rising interest rates a year after increases start, so 2016 is the time to begin adjusting portfolios to compensate for that risk.