It may not be the most highly publicized "war," but the U.S. government and the Centers for Disease Control and Prevention have been waging war against tobacco for more than five decades. The results have been nothing short of impressive, with campaigns to educate the public about the dangers of tobacco use leading the adult tobacco use rate to drop from 42% in the mid-1960s to 18% as of 2013.

The tobacco industry fights back
The pushback against the U.S. tobacco industry has threatened the growth prospects for giants like Altria (MO 0.82%), with its signature Marlboro brand, and Reynolds American (RAI), maker of Newport. These tobacco product giants have relied on their incredible pricing power and the addictive nature of nicotine to keep their bottom lines strong. Between 2008 and 2013, overall consumer prices rose by a tame 8.2%, according to the U.S. Department of labor. Meanwhile, cigarette prices rose an astounding 50% in that same time frame -- more than any other product measured.

The other growth avenue for the tobacco industry is tobacco alternatives, a niche dominated by electronic cigarettes. An electronic cigarette works by heating a flavored liquid containing nicotine into a vapor, which the user then inhales. This allows users to satiate their nicotine craving while consuming less of the harmful chemicals often found in smoked tobacco.

But there have been questions surrounding the safety of electronic cigarettes since day one. To begin with, regulators are worried that the tobacco industry could be catering to a new, and young, generation of nicotine addicts with flavors like bubble gum and cotton candy. Altria and Reynolds American have been clear that this is not their intention, but it clearly has regulators worried.

Further, the nicotine-containing liquids come in thousands of flavors, and not a single one is governed by the Food and Drug Administration. Some view this as a good thing for the electronic-cigarette industry, because it means there are few barriers to expansion. Then again, a lack of regulation has left some wondering what's actually in these solutions beyond nicotine and whether the solution is safe to inhale over the long run.

The study, which was published in the online journal Environment Health Perspectives, analyzed a sample of 51 electronic-cigarette liquids for the presence of three flavoring chemicals -- diacetyl, 2,3-pentanedione, and acetoin -- all of which are known to have adverse effects on users' lungs. Researchers attached each electronic cigarette to a lab-built and sealed device that drew air through the e-cig for eight seconds, with a break of between 15 and 30 seconds between each draw. Researchers then analyzed the air stream for the aforementioned three flavoring chemicals.

The findings showed that 47 of 51 liquids tested (92%) contained at least one of the three chemicals. Specifically, 39 of 51 (76%) contained an above-laboratory-limit amount of diacetyl, a chemical known to cause bronchiolitis obliterans, also known as popcorn lung, and other respiratory diseases in users. Popcorn lung, which is named after workers who developed the disease after working in popcorn factories and inhaling diacetyl, causes inflammation and scarring of the air sacs of the lungs. It can ultimately result in the need for a lung transplant.

What's notable is that the researchers' findings on diacetyl occurred in flavors such as cotton candy, cupcake, and fruit squirts -- in other words, flavors that would likely appeal to younger people. That's concerning, given that there are no regulations covering the industry. As Taylor Hays, director of Mayo Clinic Nicotine Dependence Center, told USA Today:"There are no FDA regulations on these products. It's the Wild West of e-cigarettes."

It should be noted that researchers from Harvard can't conclusively link the chemicals found in the vapor tested with popcorn lung or any number of other diseases in electronic-cigarette users. However, the correlation is certainly worrisome and worthy of additional follow-up.

More fuel for the fire
If the study from Harvard demonstrates anything, it's that the FDA has an ever-growing reason to get involved in the regulation of the electronic-cigarette industry. 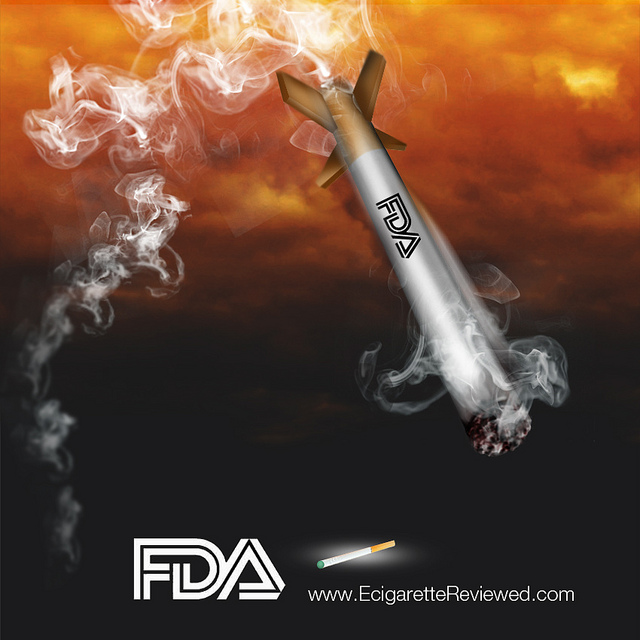 The FDA has been weighing whether or not to classify electronic cigarettes as a tobacco product for some time now. Doing so would allow it to regulate the industry, including the chemical composition of the vaping liquid produced. This isn't to say that liquid vaping producers would need to change anything so much as they'd need to disclose any known harmful chemicals on their packaging. Additionally, the FDA would work hard to ensure that there's consistency in the chemical composition of the liquids produced from one batch to the next.

However, if the FDA gets involved you can almost count on slower growth for the industry. Each new flavor would need to go through extensive testing to be approved for retail sale. Further, increased levels of transparency and the use of potentially harmful components in vaping liquid and/or the vaping process could harm sales.

For investors this is cause for more concern regarding tobacco giants Altria and Reynolds American. It's possible the electronic-cigarette industry will succeed over the long run, but the current lack of transparency and threat of FDA regulation make optimism nearly impossible. This is a sector I suggest avoiding with your investment dollars.