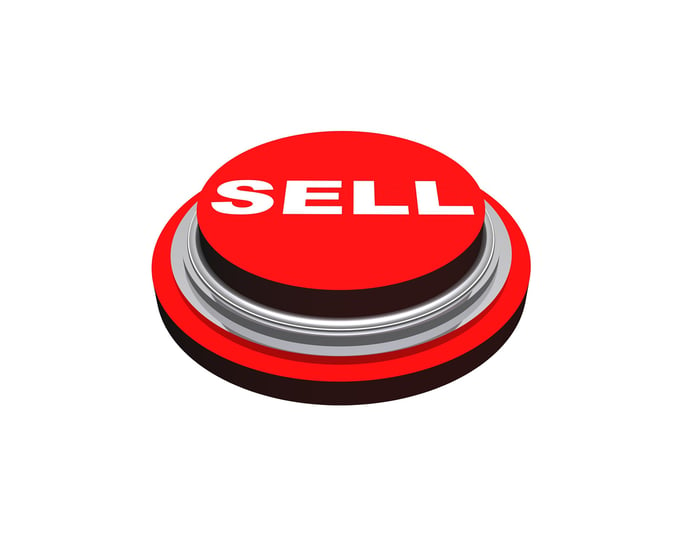 Image by PeteLinforth via Pixabay.

Investing in the stock market is one of the best wealth-building tools available to individual investors, as the returns provided from the market's best growth companies can be jaw dropping. Still, finding those winners can be an arduous task, as it requires investors to constantly scour the markets for new stock ideas, and many of those stocks are destined to become losers.

We asked a team of Motley Fool contributors to share a stock that they believe will make a poor investment in 2016, and think that our readers should stay away from. Read below to see which stocks they think should be avoided in the year ahead.

Jason Hall: The SPDR Gold Trust (ETF) (NYSEMKT:GLD) is one stock -- in this case, an ETF -- that I'm definitely not interested in for 2016. I'm not completely anti-gold, but frankly, I see little value in it as an investment, especially in the current economic environment. The SPDR Gold Trust has performed about as well as the S&P 500 since it was first introduced: 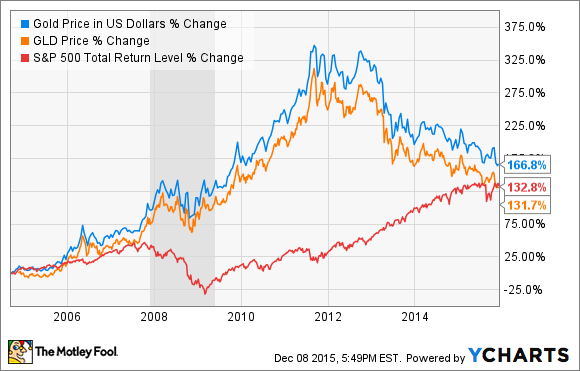 But much of gold's gains were a product of the fear and uncertainty driven by the Great Recession. Since peaking in late 2011, gold has fallen by more than 50%. It's no coincidence that this has correlated with a steadily strengthening U.S. economy. Here's a look at how gold prices have performed in relation to unemployment: 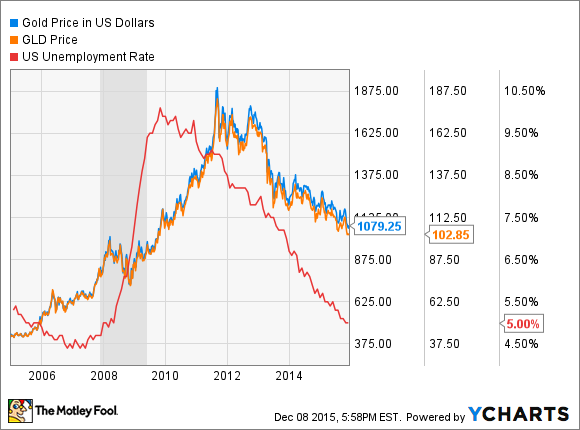 As you can see, it didn't take long for gold prices to begin steadily falling once the jobs recovery began picking up steam. And this isn't a one-time thing. Historically speaking, gold prices tend to rise when there's more economic uncertainty, and fall when things look better: 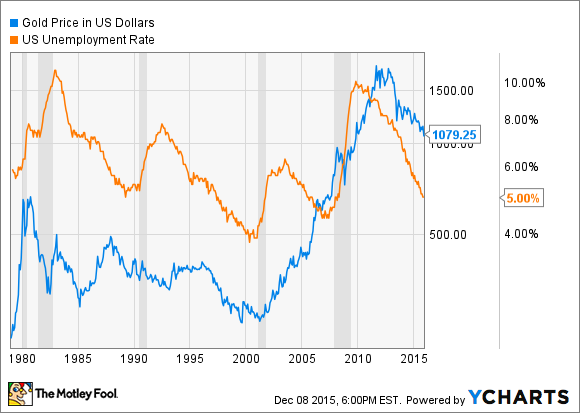 The unemployment rate isn't a perfect proxy for the economy, but it's a very important indicator of economic health. Without the boost of uncertainty to drive gold up, there's not enough economic demand for the yellow stuff to make it a market-beating investment in 2016.

Selena Maranjian: Philip Morris International (NYSE:PM) is one stock I'm avoiding in 2016 -- and one I'll likely keep avoiding thereafter. There's one obvious reason why many people might want to steer clear at any time: cancer. The company is in the business of selling an addictive product that causes cancer to people around the world. Those are not the most appealing profits in which to share.

Tobacco objections aside, though, there are other reasons to consider avoiding this stock. For one thing, despite the addictive nature of nicotine, smoking rates have been falling in many nations around the world -- including the U.S. -- due to health concerns, as well as heightened regulation and increased taxes.

Philip Morris stock doesn't exactly look like a bargain at recent levels, either. Sure, its dividend yield has topped 4.5% for a while now, which is appealing. But its payout ratio has been trending up, and is currently above 85%, suggesting that the payout isn't likely to grow briskly in the near future. In addition, Philip Morris's recent price-to-earnings (P/E) ratio near 19 is well above its five-year average of about 16.

The company has been cutting costs and raising prices when it can, along with suing various nations that are putting pressure on sales. In Norway, for example, cigarette displays are banned in stores, and Philip Morris unsuccessfully tried to stop that ban.

It also boasts some fat profit margins and generates more than $6 billion in annual free cash flow. The company's long-term prospects are not necessarily bad, but they're uncertain at best. And it's facing enough headwinds right now to keep me away.

Brian Feroldi: Small-cap biotech investing isn't for the faint of heart, as more than 90% of drugs that enter clinical trials will fail to gain regulatory approval. With those kinds of odds working against you, I think that it make sense to only invest in companies with good track records of success, and solid balance sheets to fund its clinical development.

One company that strikes out on both of those metrics is Northwest Biotherapeutics (OTC:NWBO), a small-cap clinical biotech company with a focus on immuno-oncology. The company's lead product candidate, called DCVax-L, is currently in phase 3 clinical trials, and is being tested as a potential treatment for glioblastoma multiforme, a lethal brain cancer. While DCVax-L could turn out to be a big winner if the trials go well, behind the scenes, the company itself is a complete mess, which is a big red flag for me.

Once upon a time, this was a terrific stock to own; but the past decade has been a complete disaster for long-term shareholders. Northwest Biotherapeutics has been issuing equity at an astonishingly fast rate since it first hit the markets, as its share count has risen by -- and I'm not making this up -- more than 74,000%. Meanwhile, its share price has tanked. 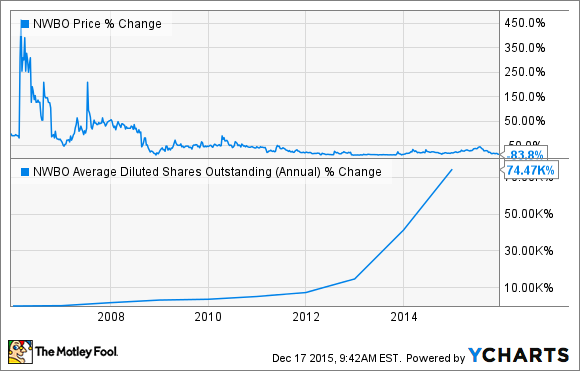 And yet, even with all the equity issuance over the years, the company isn't exactly awash in cash. As of September 30th, it only reported $5.3 million in cash on its books, forcing it to sell even more equity, as its most-recent offering brought in a fresh $30 million. This sounds like a lot of money, but when you consider that the company lost more than $74 million from operations in the first nine months of the year alone, it's highly likely that it will have to raise more capital soon, diluting shareholders even further.

While it's possible that Northwest Biotherapeutics' fortunes could turn around if DCVax-L proves to a clinical success, there's simply way too much risk here for my taste. The company's awful track record and its weak financial position make this one stock that I'll be staying away from in 2016.

Sean Williams: PDL BioPharma (NASDAQ:PDLI) may have the highest yield in the healthcare sector, at 16.5%, but you'll find me nowhere near this small-cap in 2016.

PDL BioPharma isn't your typical biotech stock. Instead of taking experimental compounds through the long clinical process, PDL BioPharma purchases royalty rights and benefits when drugs containing compounds that it owns the rights to are sold. The advantage of this strategy is that it has very minimal overhead costs, and leads to almost pure profit. The downside is that patents in the branded-drug space are finite, and the capital needed to purchase royalty rights can be extensive.

PDL BioPharma's claim to fame had been its Queen patents, which are found in blockbuster cancer drugs Avastin and Herceptin, ophthalmic giant Lucentis, multiple sclerosis behemoth Tysabri, and numerous other drugs. Unfortunately for PDL BioPharma and its shareholders, the Queen patents expired in December 2014. The only reason PDL BioPharma has been sustaining strong revenue is that it takes 12 to 18 months for the warehoused products covered by these patents to sell down. By roughly mid-year of 2016, I fully expect PDL's revenue will nosedive -- and so does Wall Street for that matter.

Queen patent revenue has comprised $363.9 million of the $412.4 million the company has reported through the first three months of 2015. By 2017, Wall Street is estimating that total sales for PDL could fall to as low as $74 million, and the nearly $2 in EPS it's expected to report this year could shrink to an annual profit of just $0.12.

Even if PDL does find a way to replace a good chunk of its now-lost Queen patent revenue through a royalty-rights acquisition, doing so won't be cheap. Raising money could put PDL deep into debt, or it could result in substantial share dilution to raise cash. One thing does look fairly certain – it's 16.5% dividend yield is likely going to be history in a matter of months. This is a stock I believe you'd be wise to avoid in 2016.

Brian Stoffel: There are a number of financial writers who claim the death of brick-and-mortar retailers is being significantly overplayed. Best Buy, for instance, has completed one of the most remarkable turnarounds in recent memory during the last three years.

But one company I don't see pulling itself out of the doldrums is Sears Holdings (NASDAQ:SHLDQ). Led by CEO Eddie Lampert -- who has an approval rating of just 21% according to more than 1,700 employee reviews on Glassdoor.com -- the company's real strategy as of late has been to sell off some of its real estate to boost earnings.

While that may help the company buoy itself and its earnings per share in the short term, as well as provide a notable squeeze on short-sellers, it isn't a winning recipe for long-term success. To get an idea of what I mean, consider how poorly the company's comparable-store sales have fared during the past five years -- with sales falling off of a cliff this year. 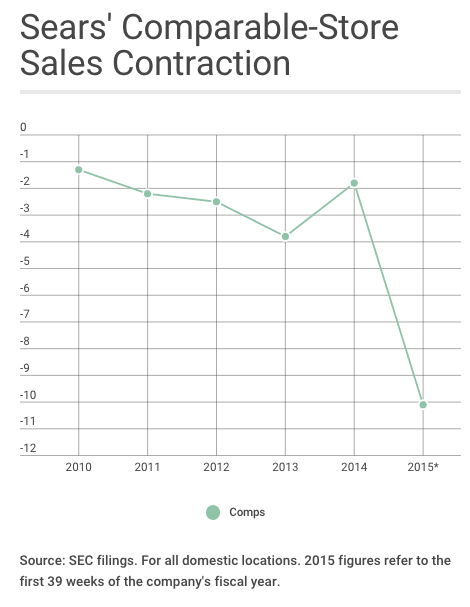 It's hard to see this ending well for shareholders.