Our contributors think these three stocks could make a strong comeback in 2016. Here's why.

Stocks that have cratered after a managerial misstep, a bad quarter, or simply a moody market can represent tremendous long-term value for patient investors. Having said that, some beaten-down stocks are better left for dead.

George Budwell: Among healthcare stocks, Opko Health has to be considered one of the top turnaround stories heading into the New Year. Although Opko's stock has fallen by more than 45% from its 52-week highs, the company has slowly been working its way toward building out a well-diversified revenue base that can provide industry-leading levels of growth for years to come. Most importantly, it looks like 2016 could finally be the year the company's plan really takes flight. 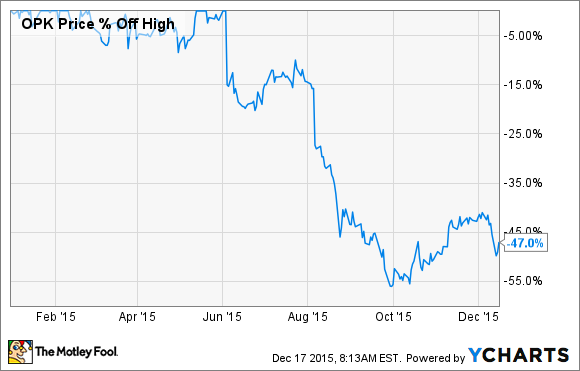 The main catalysts to be on the lookout for is the forthcoming regulatory decision for the company's experimental treatment, Rayaldee, for secondary hyperparathyroidism in patients with chronic kidney disease, along with the continued commercial progress of Opko's prostate cancer screening test 4Kscore.

According to S&P Capital IQ, analysts think these two products could drive the company's annual revenue upwards by a noteworthy 141% next year. If so, Opko would transform into a positive cash flow operation capable of supporting its emerging clinical pipeline without the need for heavy rounds of dilution via secondary offerings.

The downside is that a fair amount of Opko's projected sales growth appears to be already built into the stock's price at the point. Specifically, Opko is presently trading at around 4.5 times its projected 2016 sales. While that's not too terribly expensive for a pharma stock, there's no guarantee Opko will meet these lofty sales projections. So, I think Opko is definitely a good turnaround stock to have on your radar right now, but investors shouldn't pick up shares unless they are willing to hold for the long term.

Matt DiLallo: The oil market could be the biggest turnaround story of 2016. While the debate rages on both sides, there is growing reason to believe that oil prices are poised to head higher in 2016. EOG Resources CEO Bill Thomas noted a key catalyst on the company's most recent conference call by saying, "The U.S. is on an oil production decline based on the EIA data and could exit the year 500,000 to 600,000 barrels of oil per day lower than peak production recorded in April... we agree with the consensus view that $40 to $50 oil is not sustainable and supply demand is in the process of slowly rebalancing."
In other words, with oil supplies declining and the current oil price range not sustainable to incentivize future supply investments, oil prices need to be higher in the long run. This view that oil prices will eventually turn around is one that EOG Resources has held onto throughout the downturn. It is why the company drilled but didn't complete hundreds of oil wells. Those are wells that the company plans to complete when conditions improve, which would enable it to rapidly grow production.
With a decline in U.S. oil production firmly underway, it appears that the seeds of a turnaround are being planted. While that would be great news for the entire industry, it would really be a key catalyst for EOG Resources. A price rebound would enable EOG Resources to start unleashing its stockpile of wells, which is a fuel that could quickly ignite the company's stock price and turn it around as well.
Tim Green: Men's Wearhouse has been nothing short of a train-wreck this year. The stock is down nearly 70% year to date, and down nearly 80% from its 52-week high, driven by the company's ongoing struggle to integrate Jos. A. Bank, which Men's Wearhouse acquired in 2014. 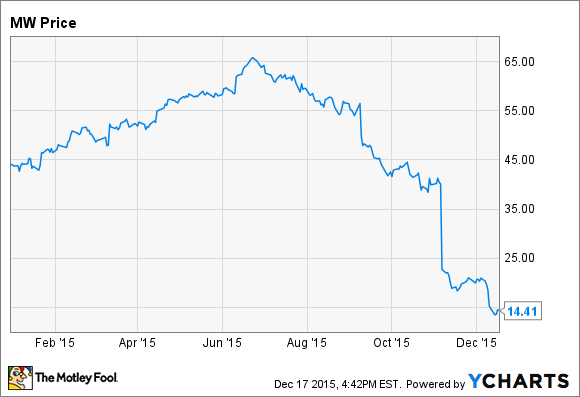 Comparable-store sales at Jos. A. Bank locations have been weak all year, but the company's decision to do away with the popular buy-one-get-three-free promotions has led traffic to fall off a cliff. During the first week of December, comparable sales tumbled by more than 35% at Jos. A. Bank stores.

It goes without saying that 2016 will be a rebuilding year, and Men's Wearhouse will need to completely revamp the Jos. A. Bank brand. The rest of the company, which is mostly comprised of the namesake Men's Wearhouse stores, has been performing well, but the deep problems at Jos. A. Bank are hurting profits. In November, Men's Wearhouse slashed its earnings guidance for the full year.

If Men's Wearhouse can successfully turn around the Jos. A. Bank brand, the stock will look like a steal in retrospect. Currently, the stock trades at around eight times the low end of the company's adjusted earnings guidance for this year. There's no telling how long it will take for Men's Wearhouse to fix the problems at Jos. A. Bank, but this is certainly a turnaround story to watch in 2016.