If the consumer tech giant can solve the issues surrounding 3D printing in multiple colors, that could mean stiff competition for 3D Systems and Stratasys.

An Apple (AAPL 1.37%) patent application for a unique color 3D printer was published in early December. This doesn't necessarily mean that the consumer tech behemoth will develop and commercialize a 3D printer. However, it certainly means that Apple's seriously exploring the possibility of joining industry leaders 3D Systems (DDD 6.22%) and Stratasys (SSYS 4.22%) in the desktop 3D printing space. 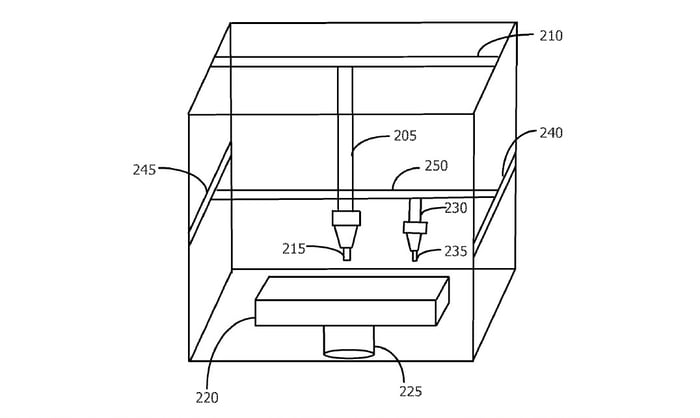 Apple's patent application, submitted in May 2014, is titled "Method And Apparatus For Three Dimensional Printing Of Colored Objects." The printer in the application appears to use fused deposition modeling (FDM) or a similar technology. FDM printers use a thermoplastic filament, which is heated to its melting point and then extruded, layer by layer, to create a three-dimensional object. The technology was invented in the 1980s by Scott Crump, the founder and former CEO of Stratasys, and is now widely used in desktop 3D printers because Stratasys' key FDM patents expired.

The primary thing that's unique about the printer in Apple's patent application is that it colors the object being printed while it's being printed. It accomplishes this via two nozzles -- one for extruding the material being printed and the other for applying the coloring agent or dye. The patent also contains an alternative method, which involves coloring the object after it's been printed.

Multicolor 3D printing is now possible but has many challenges and limitations. Select desktop 3D printer models, such as Stratasys' MakerBot Replicator 2X Experimental printer and 3D Systems' Cube 3, accomplish multicolor 3D printing by using multiple extruders, one for each color filament. However, there are only so many extruders that can be added to a small model, at least cost-effectively so, with both models above sporting just two extruders. These printers tend to be expensive for consumer items, with Stratasys' model priced at $2,500. Additionally, consumers must purchase colored filaments in advance, which doesn't leave room for spontaneity.

Alternatively, multicolor 3D printing can be performed on a 3D printer equipped with just a single extruder, but one must pause the printing to switch filament colors. This poses other issues -- it slows the process, and dirt or dust could enter the extruder, which could clog it or damage the object being printed.

What Apple's entrance into the 3D printing market could mean

Apple's successful entrance into the desktop 3D printer space would be a positive for consumers and almost surely a negative for 3D Systems and Stratasys, which now jointly own a large portion of the moderate-to-high-end desktop 3D printer market.

These two industry leaders will soon likely face compelling competition in the enterprise 3D printing space, with tech giant HP and well-funded start-up Carbon3D among those planning to enter this arena in 2016. So their resources are already probably going to be stretched quite thin. Battling the mighty Apple in the desktop 3D printing realm would be daunting under the best of circumstances. Such a battle at the same time as trying to fend off HP, Carbon 3D, and others in the bigger enterprise space has the makings of a slaughter. Of course, this is assuming neither 3D Systems nor Stratasys makes any significant advances in their desktop printers before a possible Apple 3D printer launch.

Apple's jumping into the desktop 3D printer market should be fantastic news for consumers interested in 3D printing that haven't pulled the trigger on a purchase because of the many issues that plague current models.

The desktop 3D printer market is at the right stage for Apple to enter the market. Cupertino's M.O. is entering a consumer technology space after the pioneers have invented it, and greatly improving the core product from both technological and user-friendliness standpoints. This leads to the market ballooning in size due to increased consumer adoption, with Apple typically dominating it, or at least the higher-end niche within the overall market. This scenario has played out with personal music players, smartphones, and tablets, and is now playing out with smartwatches. So, there's every reason to believe it would also hold true with desktop 3D printers if Apple enters the market.

3D printing a wrap ...
Apple is arguably the most innovative consumer tech company on the planet, with pockets deep enough to buy just about any capability it doesn't possess. So, the probability is very high that it will own the moderate-to-higher-end desktop 3D printing space if it enters the market. The market for desktop 3D printers includes not only the consumer realm but also the educational market, as well as a portion of the prototyping market.

It's impossible to accurately quantify the opportunity that 3D printing presents to Apple. Most forecasters are shying away from predicting growth in the consumer market, which has proven trickier to predict than growth on the enterprise side. Additionally, markets tend to expand to a much greater size than widely expected when Apple enters the scene. It's safe to say, however, that the desktop 3D printer market has huge potential because penetration rates in homes are very low.