In a year when the stocks of some of the highest-profile players in the solar industry have plunged, First Solar (NASDAQ:FSLR) has been one of the industry's best performers. The company hasn't done anything fancy. It's stayed focused on building large-scale projects and making money by selling them to investors, including its own yieldco, 8point3 Energy Partners. It's a model that's worked for First Solar while others have fallen flat. Here's what has set First Solar apart in 2015. 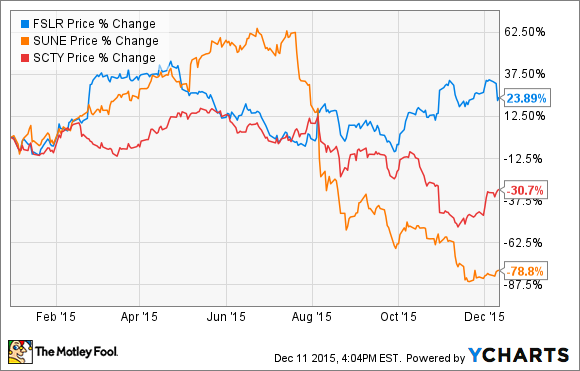 First Solar's strategy pays off
First Solar's best move this year wasn't really a single move, but rather the culmination of years of building a business that can stand the test of time. What separated First Solar from developers like SunEdison (NYSE: SUNE) and SolarCity (NASDAQ: SCTY) in 2015 was a better balance sheet and consistent income statement that has proven, long-term, to trump growth in solar. First Solar will never be the growth company those two competitors want to be, but it's stashing cash while the other two are drowning in debt. 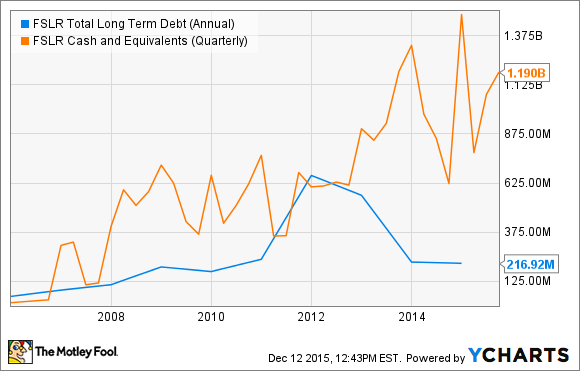 The income statement tells a similar story. First Solar has made money in 2015, expecting to report earnings per share of $4.30 to $4.50 for the full year, while SunEdison and SolarCity have lost money. First Solar is taking a different strategy, selling most of its projects and panels to third parties rather than holding them on the balance sheet, which is a proven way to make money in solar. That certainty has been highly valued by investors this year. 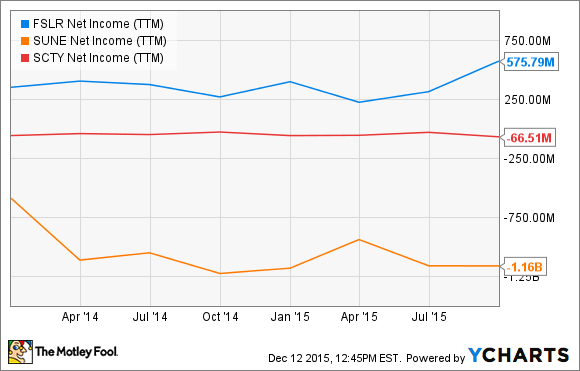 This financial strength allows First Solar to be flexible through market turmoil, like we've seen this year. When the yieldco market collapsed this summer, SunEdison was forced to change strategies and sell to third parties for a lower margin. That collapse caused a domino effect of bad news, causing the company to abandon multiple acquisitions that were supposed to drive growth.

In the same situation, First Solar said it had multiple options other than selling projects to its newly launched yieldco. It has the capacity to hold them on the balance sheet, may sell partial stakes to utility partners (as it did with its Stateline project), and may also sell to third parties. But it has the capacity to do what's right for the company and isn't forced into fire sales just to stay in business.

Staying on top in solar
For the last few years, the market has put a lot of value on growth rather than profits in solar. It didn't matter that SunEdison and SolarCity were adding debt to fuel growth, as long as the growth numbers hit expectations. But that strategy fell apart in 2015, and the market realized that making money and having a strong balance sheet that allowed operational flexibility was important. Years of development that created that excellence is why First Solar beat its rivals this year, and it sets the company up well for long-term success. And that's something all solar investors should learn from going into 2016.