When oil prices have fallen as dramatically as they have in 2015, the financial incentive to invest in future oil and gas projects greatly diminishes, which in turn has made GE's oil and gas segment its worst this year.

Operating seven industrial segments is both a positive and negative for General Electric (GE 0.94%). On one hand, the diversification it offers reduces the balance sheet's exposure to headwinds that may negatively impact one of its segments, giving better staying power to ride out difficult periods than weaker rivals. On the other hand, it often means that GE's seven segments aren't firing on all cylinders at the same time, as they tend to follow different cycles, which can muddle overall performance.

Through the first nine months of 2015, three of GE's seven industrial segments experienced an annual revenue decline. The worst was its oil and gas segment, which caters to the entire oil industry: drilling, completion, production, oilfield operations (onshore and offshore), and transportation via pipelines and liquefied natural gas. When oil prices have fallen as dramatically as they have in 2015, the financial incentive to invest in future oil and gas projects greatly diminishes, which in turn has pressured GE's oil and gas segment. 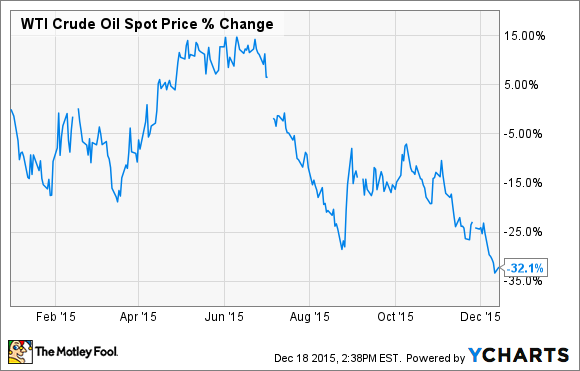 2015 highlights
During the first nine months of 2015, GE's oil and gas revenue fell by 13% year over year to $11.9 billion, representing 15.3% of its overall industrial business. Operating profits declined 10% to $1.6 billion in the same period, making up about 12.9% of its total industrial profit.

Although weak oil prices and volumes have primarily created a challenging operating environment for GE's oil and gas segment, the stronger U.S. dollar also weighed on the segment's performance through the first nine months of 2015. All told, these headwinds were partially offset by lower costs and higher productivity.

To be clear, the underlying weakness that GE's oil and gas segment is experiencing hasn't stopped it from working to improve the segment's operating performance. At the close of the third quarter, the company remained on track to cut expenses by $600 million this year and by another $1 billion in 2016, helping it become more competitive in this market.

2016 and beyond
Going into 2016, GE's strategy for its oil and gas segment is relatively straightforward: continue improving its costs structure, which enhances its competitiveness, while it waits for prices to rebound and revitalize the industry. GE's staying power – thanks to its diversification and strong balance sheet – could also help it win contracts against rivals with weaker balance sheets.

Ultimately, if oil prices do recover and spark increased activity, the segment's improved cost structure could translate to improved operating margins. But until that happens, which is a big unknown at this point, GE's oil and gas segment is likely to remain under pressure.