It's time to start thinking about retirement stocks for 2016. Here's a look at three top choices.

With the calendar set to turn to 2016, investors should start looking ahead for the next great companies to buy. If it's stocks you plan to retire with or will count on for income in retirement, finding businesses with solid long-term prospects, strong competitive advantages, and great management are all critical to investing well.

We asked three of our top contributors to each give us a top retirement stock to buy in 2016, and they gave us two dominant tech stalwarts in Alphabet Inc. (GOOGL -7.52%) (GOOG -7.45%) and Apple (AAPL -1.70%), and multinational infrastructure giant Brookfield Infrastructure Partners L.P. (BIP -2.62%).

Here's a closer look at why our contributors chose these three. Brian Stoffel (Alphabet): It might seem odd to suggest that Alphabet -- the company formerly known as Google -- would make a top pick as a retirement stock to buy. Currently, the company is already the second most valuable in the world, worth for over $500 billion. It also trades for roughly 28 times non-GAAP trailing earnings, which isn't cheap. And most importantly, for retirees, it offers no dividend.

But hear me out.

If you buy shares in Alphabet, you're getting a two-for-one deal. On one hand, you own shares in a company with one of the widest moats in the world -- Google owns 71% of the global search market share. You also get a piece of the world's most popular mobile operating system (Android) and the world's third most popular website (YouTube.com).

You also get exposure to Google's semi-top-secret moonshot business, dubbed Google[x]. Run by co-founder Sergey Brin, the projects aims to develop life-altering technologies. Some that we know about are self-driving cars, and contact lenses that can measure certain health metrics seamlessly. If any one of Google[x]'s projects become a hit, it'd be a boon for investors.

But perhaps most importantly, Google is sitting on a pile of cash -- roughly $71 billion, to be exact. Eventually, I believe that Google, like other more mature technology companies, will begin to pay out a dividend. Over the past 12 months, the company has generated $14.6 billion. If it chose to use just 35% of that cash flow to pay out dividends, it would amount to a respectable 1% dividend yield, but with plenty of opportunity for growth in the future.

Dan Caplinger (Apple): Tech giant Apple has gotten a lot criticism lately, with pundits accusing the maker of iPhones and other wildly popular electronic devices of having run out of innovative ideas and simply squeezing as much profit from its already-established franchises as possible. What many investors don't seem to understand is that even if that's true -- something that the company itself definitely wouldn't concede -- the stock's valuation is so attractive that even conservative value investors have to appreciate what the stock offers at current prices.

Right now, Apple trades at around 12 times trailing earnings, with analysts expecting earnings growth in the 7% to 10% range over the next couple of years. That works out to an earnings yield of more than 8%, compared to 10-year bond yields in the 2% range. Even if you think Apple has no more growth potential than a Treasury bond, six extra percentage points seems like a more than adequate risk premium to compensate investors for a possible future decline in Apple's business. When you consider the possibility that Apple might just come up with the next big hit device, its shares look like a bargain. That's a concept that can be tough to image for a stock with the highest market capitalization in the stock market, but nevertheless, Apple has a lot of attractive features that dividend investors can appreciate.

Warren Buffett has lauded the value of businesses with high barriers to entry that produce consistent and profitable cash flows. This is a big reason he's invested billions of dollars into railroads and utilities, businesses that have produced reliable profits for Buffett's Berkshire Hathaway over the years.

This is what makes Brookfield Infrastructure a great retirement stock. The partnership owns assets on four continents, including power transmission systems, railroads, and ports, among others. These assets are geographically and economically diverse, unlikely to face competitive disruption, and are all critical infrastructure components where they are located.

This has provided those steady cash flows, which have allowed it to regularly increase its distribution: 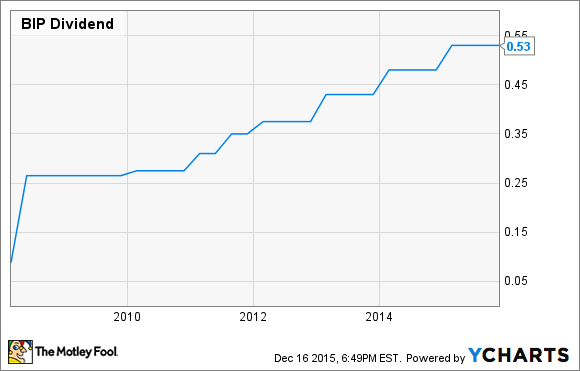 If you bought shares today, you'd get more than a 5.5% yield on your investment, and management's stated target is to increase payouts between 5% and 9% annually. If steady, growing retirement income is your goal, Brookfield Infrastructure Partners deserves a close look.