Rising load factors across the airline industry mean pricing pressure will wane in 2016 and beyond.

After years of outperformance, shares of Spirit Airlines (SAVE 1.53%) have taken a big step backward this year, losing nearly half of their value. 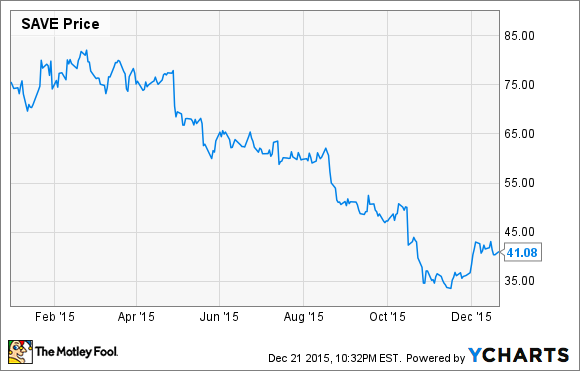 Investors have lost confidence in Spirit's profit growth trajectory as its unit revenue has plummeted during 2015. However, Spirit Airlines bears appear to be missing one key factor that bodes well for the company's performance in 2016 and beyond: rising airline industry load factors.

Price-matching has become a problem
In recent years, Spirit Airlines has benefited from other airlines' attempts to shore up their unit revenue by tightly managing capacity and raising fares whenever possible. Spirit's dramatically lower unit costs have allowed it to undercut the fares of major airlines like American Airlines (AAL 0.24%), Delta Air Lines (DAL -0.13%), United Continental (UAL -0.33%), and Southwest Airlines (LUV 0.47%).

Because Spirit Airlines only operates one or two flights a day on most of its routes, it doesn't steal that many passengers from its rivals when it enters new markets. As a result, other airlines have mainly ignored Spirit's growth rather than trying to defend their market share with price-matching policies.

Or rather, that was the case until 2015. Price-matching has become increasingly common this year, though. American Airlines has been particularly blunt about its plans to compete on price even with the likes of Spirit Airlines. Delta Air Lines created a new fare type to match Spirit's prices. Southwest Airlines now regularly offers one-way fares as low as $41 -- $25 before taxes and fees -- on many routes. United Continental has also started matching more budget carrier fares.

The result of this increasingly aggressive price-matching by larger rivals is that Spirit Airlines' unit revenue fell 14.4% year over year in the first nine months of 2015. The pace of the unit revenue declines has actually accelerated over the course of the year.

The paradox of price-matching
The odd thing about the pricing pressure Spirit Airlines has faced this year is that it has a huge cost advantage over American, Delta, and United: so much so that Spirit's average fare doesn't come close to covering their unit costs. Spirit has a considerable cost advantage over Southwest Airlines as well.

It may seem strange that rival airlines are so eager to match fares that are below their average cost per seat. The key to understanding this behavior is to look at changes in load factor: the percentage of seats sold to paying customers.

It's quite rational for an airline to sell some seats below cost if those seats would otherwise go empty. That's what the top four airlines have been doing to combat Spirit's growth. During lower-demand periods when they would normally have more empty seats, they are slashing fares. This stimulates demand and allows these airlines to fill up their planes.

Planes are getting fuller
This trend has been a significant headwind for Spirit Airlines this year. The good news for Spirit is that while it may make sense for other airlines to sell seats below cost if they would otherwise go empty, it doesn't make sense for them to add seats (by buying more planes, for example) that they would have to sell below cost.

This means that as the existing inventory of seats gets closer to being filled, other airlines will have less and less of an incentive to match Spirit Airlines' fares. We are quickly reaching that point.

All of the major airlines have reported soaring load factors recently. Photo: The Motley Fool

With these big load factor increases, planes are now nearly as packed in off-peak months as the 86%-88% load factors typically seen during the peak months of June, July, and August.

It's impossible to put an exact upper limit on how high load factors could go, but it's certainly not 100%. As an airline's load factor rises, more and more flights sell out. That raises the risk of missing out on last-minute bookings from high-paying business travelers. (If the airline instead "overbooks" a flight, it might have to offer $300 or more in compensation to someone who bought a ticket for less than $100.)

Thus, the major airlines probably don't have much room to profitably increase their load factors further. That in turn means that the fare environment for Spirit Airlines is probably already close to bottoming out. If the company can show in 2016 that its unit revenue is stabilizing -- while unit costs continue to fall -- Spirit Airlines stock is likely to bounce back from its big drop.