Diversification is good in a portfolio, but it can be a recipe for underperformance in a company. Are these three companies falling victim?

You've heard of "too big to fail." But what about "too diversified to succeed?"

On one hand, a diverse portfolio is a safer portfolio. Generally speaking, the risk of major capital losses is reduced when one owns a wide variety of businesses. Weakness in one investment or sector is offset by strength or stability in others.

On the other hand, if one's portfolio becomes too diverse, it can prevent market-beating returns as the portfolio itself starts to resemble the broader market. The same can happen with a corporation: If it has businesses in too many different sectors, the likelihood increases that under-performance in one or more units will offset out-performance in others, resulting in lackluster overall results.

Less diverse by the day
The folks at GE know a thing or two about being over-diversified. Just three years ago, the company owned the following businesses:

Not only did its financial holdings cause GE to take a huge hit during the financial crisis ... 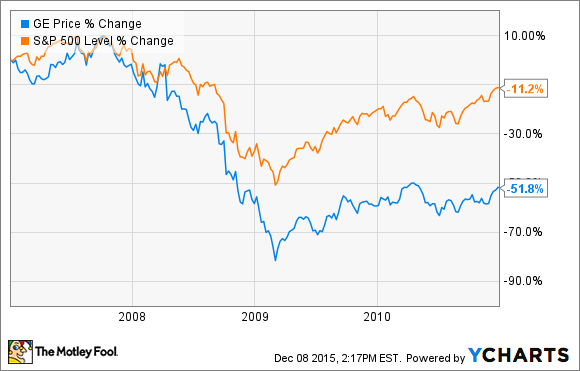 ... but also during the recovery, the stock's performance was practically identical to that of the broader market: 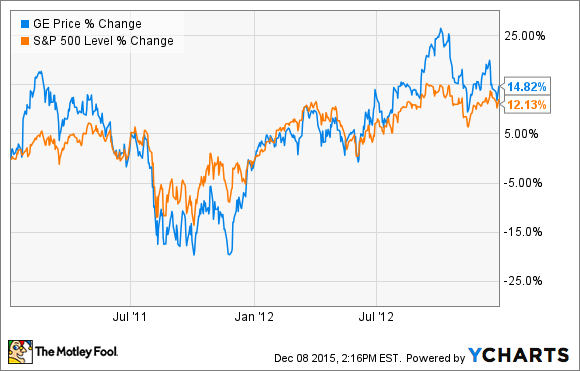 Starting in 2013, though, Chairman and CEO Jeff Immelt began to refocus the company on its core industrial businesses. He sold off the NBC Universal stake and the financials and is seeking to shed the underperforming consumer appliances business as well.

But even with the big gains the stock has made in recent weeks, it still hasn't outperformed the market over the past three years: 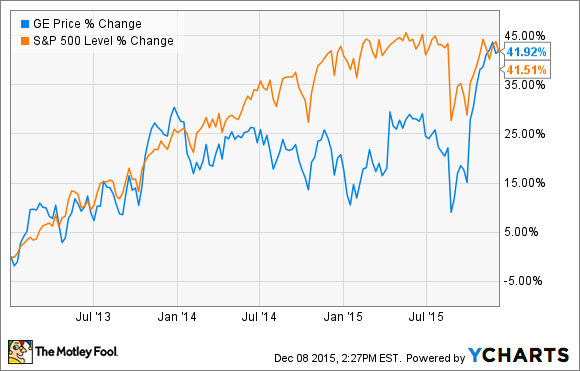 Currently, this may be due to GE's heavy exposure to the energy sector. In fact, in the most recent quarter, a 5% YOY gain in GE's Aviation division was more than offset by a 16% YOY loss in the Oil and Gas division. But even if the energy sector comes roaring back, it's probable that some other sector will show weakness.

Conclusion: Even with its recent streamlining efforts, it's possible that GE is still too diversified to significantly outperform the market.

The Oracle's not immune
It's possible that GE's problem isn't diversity, but the particular industries in which it operates. So let's look at Berkshire Hathaway. Berkshire invests in other companies' stocks (for example, it's the largest institutional shareholder of Coca-Cola), but it also owns dozens of diverse businesses outright, mostly in industries that aren't shared by GE. These include:

With all that diversity, it's not surprising that there hasn't been much daylight between Berkshire stock and the S&P 500 since 2008: 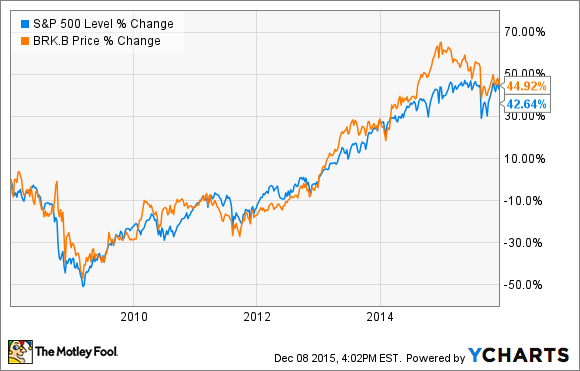 But interestingly, if you look over the past 20 years, it's a clear market-beater thanks largely to strength through the 2000s. 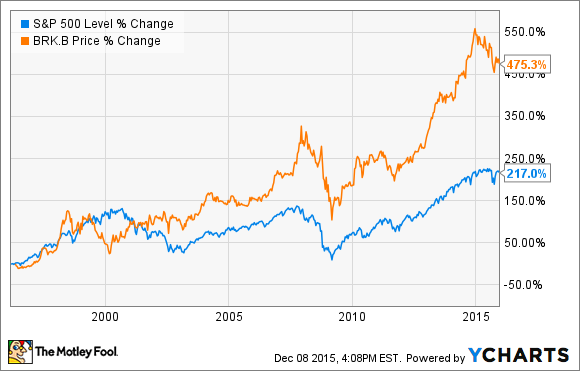 In the early 2000s, Berkshire's blue-chip portfolio was able to weather the market downturn caused by the bursting of the dot-com bubble. Just before the August 2007 pop, Berkshire reported that its earnings for the first half of the year were up $1 billion YOY, and in September 2007, Barron's named it the most respected company in the world.   :

Berkshire's most recent quarterly performance, like GE's, was a mixed bag. A $185 million gain in YOY EBIT for BNSF was offset by a $238 million YOY loss for the Insurance group. Energy earnings were up while manufacturing earnings were down. And so it goes.

Conclusion: Even the great Berkshire Hathaway isn't immune from the effects of diversity over the short term. However, over the long term, Buffett has managed to handily beat the market, which speaks to his abilities as an investor.

Does size matter?
One could argue that it's GE's and Berkshire's size and not their diversity that's preventing them from beating the market lately. But other huge American corporations that aren't diversified have managed to outperform over the last five years: 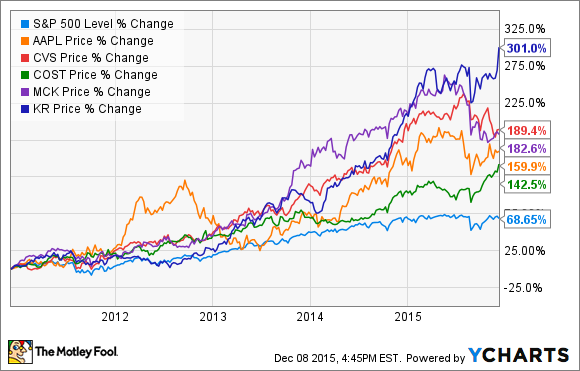 ^SPX data by YCharts. All companies listed are among the largest 20 Fortune 500 companies.

Still, GE and Berkshire are both extremely large companies. Let's look at the smaller Honeywell. Like GE, it's a diversified industrial conglomerate. But it's roughly a quarter of GE's size and doesn't operate in nearly as many sectors.

Honeywell's three-year performance has not only been stronger than GE's and Berkshire's, but it has also consistently outperformed the S&P over that period: 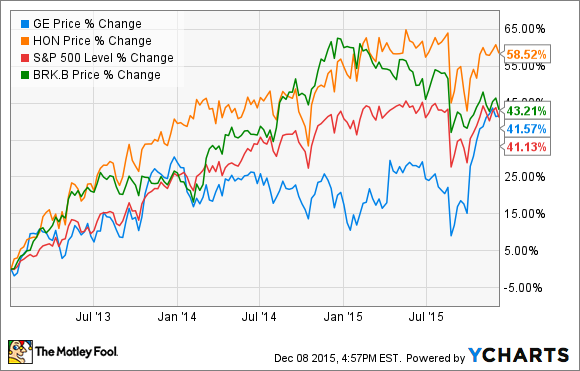 The same is true over the past 10 years: 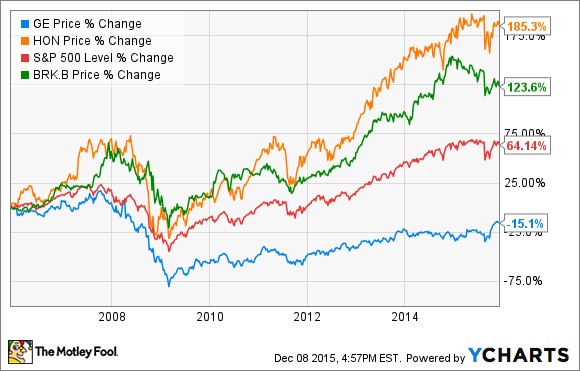 While it's possible that this is just lucky happenstance based on Honeywell's particular portfolio, it would take an awful lot of luck to be able to consistently outperform the market over multiple years and multiple time horizons. More likely is the fact that although Honeywell is diversified within the industrial segment, its operations are focused on three major areas: Aviation/aerospace, transportation (mostly automotive parts), and chemicals. For Honeywell, these segments seem to have moved more or less in tandem. In the last quarter, for example, profits were up YOY in all three segments by between 3.8% and 5.4%.

The ultimate conclusion here is that Honeywell doesn't seem to be too diversified to outperform the market.

The takeaway
It's always important to investigate a company before buying to make sure it has a decent chance to beat the market. Otherwise, you might as well just buy an S&P 500 index fund.

Diversity should be one of the things you look at, particularly whether a company's diverse holdings seem to work against one another to hamper overall growth. This can be easily investigated by looking over the business segment section of the quarterly or annual report.

While a large, diversified company can provide ballast to a portfolio it can also hold back your returns. Be wary of any stock that seems overly diversified and doesn't have a proven track record of market-beating returns.