Exelixis (NASDAQ:EXEL) has had a monster year, up 244% year to date. Anticipation of positive data fueled the stock price growth in the first half of the year followed by actual data in July, creating a huge spike. It's your typical feel-good biotech story, which was warmly welcome after Exelixis' not-so-good 2014. 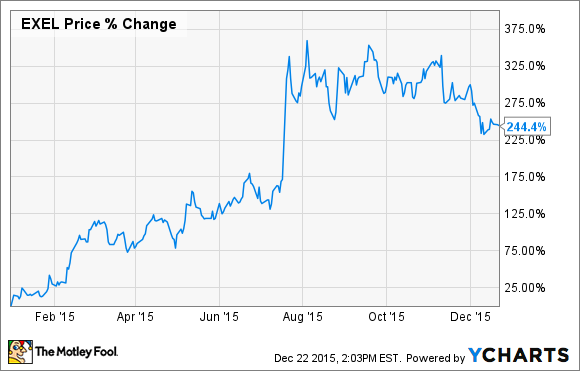 Exelixis' Rise From the Ashes

The major catalyst for the year was, of course, the Meteor clinical trial testing cabozantinib in kidney cancer. The drug improved progression-free survival -- how long the patient remains alive while the tumor isn't growing -- by 42% compared with Novartis' (NYSE:NVS) Afinitor.

Progression-free survival is a surrogate endpoint -- patients and their doctors actually care about overall survival -- and cabozantinib looked good there, too, reducing the risk of death by 33% compared with Afinitor. Unfortunately, because this was an interim look at the data, the difference between the two treatments wasn't statistically significant. The trial continues though, and it seems likely the final data will show cabozantinib helps patients live longer.

Cabozantinib is already approved as a treatment for medullary thyroid cancer under the brand name Cometriq, but the version for kidney cancer is a slightly different formulation, so Exelixis has to submit a full New Drug Application with the FDA.

During its third-quarter earnings release, Exelixis guided for submitting an application to the FDA by the end of the year, and the company's investor relations and corporate communications representative, Susan Hubbard, told me today that the company plans on submitting a press release when it does.

An application to market the drug for kidney cancer in Europe is expected to be filed early next year. Both EU and U.S. regulators are likely to give the drug a shortened review process given the improvement on the standard of care.

While it's pretty clear that cabozantinib should be able to take market share from Novartis since it beat Afinitor, Exelixis will also have to battle Bristol-Myers Squibb (NYSE:BMY) for Novartis' market share since Bristol-Myers Squibb also ran a trial showing its immuno-oncology drug Opdivo was superior to Afinitor. The only way to know whether Exlixis or Bristol-Myers Squibb will come out on top is with a head-to-head clinical trial comparing the two drugs, but don't expect that to happen; Exelixis is running a trial testing cabozantinib in combination with Opdivo. If you can't beat 'em, join 'em.

That other drug got approved, too
The Meteor data and eventual approval of cabozantinib are clearly Exelixis' most important milestones, but Exelixis did have some other good news this year: Roche announced the U.S. and EU approvals of Cotellic, which was developed by Exelixis and licensed to Roche's Genentech.

In the U.S., Exelixis will co-promote the melanoma drug and receive a 50% cut of the profit and losses from sales, which decreases as sales of the drug increase. In Europe, the company will receive a low-double-digit royalty, but that's based on sales, not profits.

Melanoma has become a crowded field with the approval of Opdivo and Merck's Keytruda, but Roche has incentive to drive sales of Cotellic because it's used in combination with another Roche drug called Zelboraf.

On to 2016
With just the FDA application submission for cabozantinib left this year -- tick-tock, Exelixis -- investors should be focused on next year and how the biotech's newly approved drugs are going to sell. It's unlikely that Exelixis' stock will have the same kind of returns next year, but a solid launch of one or both drugs should drive Exelixis' share price higher.