Berkshire Hathaway's (NYSE:BRK.A) (NYSE:BRK.B) insurance companies are worthy of envy. Large, profitable, and responsible for generating billions of dollars for Buffett to invest, the insurance group at Berkshire Hathaway underlies much of its recent and historical success.

Insurance isn't always easy money. Berkshire Hathaway's insurance operations had a less-than-stellar start to the last decade. For four years running, from 1999 to 2002, the insurance operations wildly mispriced risk. Berkshire encountered more in losses than it earned in premiums. Even the extraordinary GEICO unit posted an underwriting loss in the year 2000.

Some of the losses simply couldn't have been predicted. The steepest loss occurred in 2001, when the 9/11 terrorist attacks resulted in outsize losses for Gen Re, Berkshire's reinsurance subsidiary. The reinsurer made up 45% of Berkshire's premium revenue that year.

To blame the performance entirely on 9/11 would be unfair, however. The losses began well before Sept. 11, 2001, and ended two years afterward. As Buffett wrote in an annual letter, his decision to acquire Gen Re in 1998 for $23.5 billion  may have been made on the faulty assumption that Gen Re's underwriting was just as good as it had been through history. Clearly, it wasn't.

Shortly after the acquisition, Buffett noted that it realigned executive compensation at Gen Re to pay for performance. In his letter to shareholders in 1999 he wrote that "incentive compensation plans are now directly tied to the variables of float growth and cost of float, the same variables that determine value for owners." One of the beautiful things about Berkshire Hathaway is that its employees are rewarded for behavior that improves shareholder value.

Long-tail by nature, the changing incentives at Gen Re didn't have an immediate impact. Where good insurers only insure risks at good prices, Gen Re was seemingly insuring any risk at bad prices. The result was the four-year streak of underwriting losses.

Slowly the tide shifted. Gen Re posted underwriting profits in 2003 and 2004, the first time ever as a Berkshire portfolio company. The streak came to an end in 2005, however, when hurricane Katrina and Rita resulted in large catastrophe losses. Since 2005, however, Gen Re has been profitable in every year.

In fact, in the last 10 years, three of four of its insurance units have been profitable in every single year. One, Berkshire Hathaway Reinsurance, lost money in just one of the last 10 years. 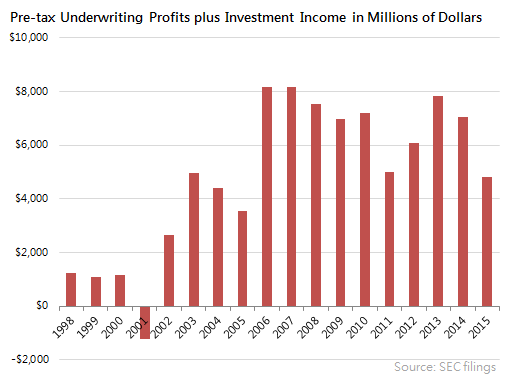 This result is simply phenomenal. When investment income earned from Berkshire's float is included, the insurance companies have been profitable in 17 out of the last 18 years.

The business of insurance is volatile by its nature. Infrequent but severe catastrophe losses will occasionally rip into its profits, resulting in a negative year. But as Berkshire's stable of insurers has grown more diversified -- it insures cars, homes, health, other insurance companies, and the occasional baseball player -- its profits have become more consistent.

Headline-grabbing acquisitions of utilities, car dealerships, and airplane parts manufacturers will play a part in Berkshire's future. But insurance will always be its bread-and-butter business.