There isn't a single soul Warren Buffett loves more than Ajit Jain. For years, Berkshire Hathaway's (NYSE:BRK.A)(NYSE:BRK.B) annual shareholder letters have described Jain as something of a saint in the world of insurance. 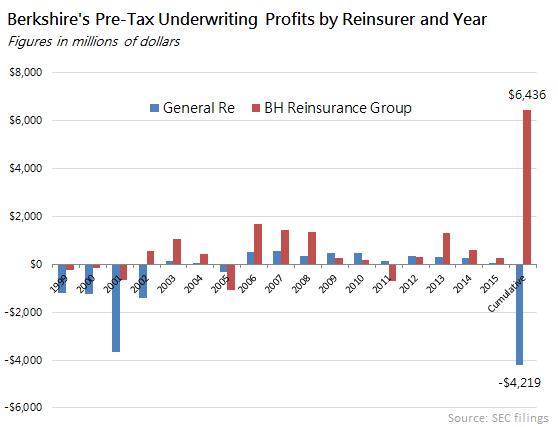 On the basis of underwriting margin, which provides a better method to directly compare insurers, one can see that Jain has simply mopped up his competition at Berkshire Hathaway.

Jain's underwriting performance is simply remarkable, far better than the underwriting ability of a business Berkshire paid $23.5 billion for.

Lest you think I'm being overly generous in attributing BH Reinsurance's record to Jain, I want to provide more numerical context for his unit's historical record.

My favorite part of the Ajit Jain story is that it all happened almost by accident. As Jain explained, his start in reinsurance came by fortunate timing.

"I didn't know how to spell 'insurance,' or 'reinsurance,' but I was hired to do a job in the reinsurance operations of National Indemnity. Fortunately, that was at a point in time when it was raining gold in the insurance industry, and you really didn't need to know much about the business as long as you could understand some basic numbers," Jain later recounted.

But don't let Jain's humility leave you with the wrong impression. Though good timing and luck may underlie a three-year record, luck simply doesn't build a 30-year record like Ajit Jain's. It's no surprise Buffett lavishes him with praise. If Buffett is the Oracle of Omaha, Jain is the Oracle from India.