It was a huge year: 3D printing stocks plunged, competition intensified, and investors realized that the Third Industrial Revolution wasn't just around the corner.

Make no mistake: 2015 has been huge for 3D printing. It'll likely go down in the history books as the year that 3D printing stocks completely unraveled, competitive concerns intensified, and investors realized that the Third Industrial Revolution wasn't just around the corner. For such a small industry, there's been an overwhelming number of headlines -- positive and negative -- for industry watchers to keep up with.

Overall, there were six headlines that defined the 3D printing industry in 2015.

Customers pump the brakes
3D Systems (DDD 5.44%) and Stratasys (SSYS 3.09%) -- the largest 3D printing companies by revenue -- surprised investors in 2015 after reporting a significant slowdown in orders across their customer bases. Stratasys theorized that the record growth the 3D printing industry experienced in 2013 and 2014 created an oversupply of 3D printing capacity in the marketplace, causing customers to delay placing new orders in 2015. 3D Systems didn't elaborate further than citing a notable slowdown in spending from the automotive, oil and gas, healthcare, and aviation industries.

In the first nine months of 2015, 3D Systems' revenue increased by a modest 3.6%, while Stratasys' revenue declined by 2%. By segment, the weakness largely stemmed from product sales -- not an encouraging sign for the "razor" aspect of their razor-and-blade models, which drives the recurring sales of high-margin consumables over a 3D printer's life.

Investors get more realistic
After a series of earnings misses and mishaps across the 3D printing stock universe, investors lost confidence in the sector's ability to execute, create long-term shareholder value, and came to grips with how the Third Industrial Revolution wasn't going to happen overnight. The fall in 3D printing stock prices reflects these realizations, affecting nearly every publicly traded pure-play 3D printing stock: 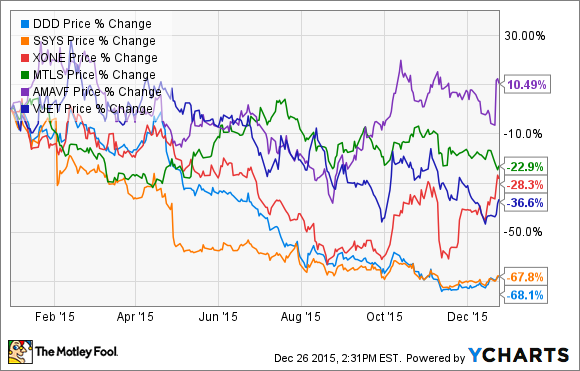 Trending in 2015: writedowns at Stratasys
Stratasys took some serious writedowns this year related to acquiring MakerBot and its 2012 merger with Objet. It hasn't been pretty: 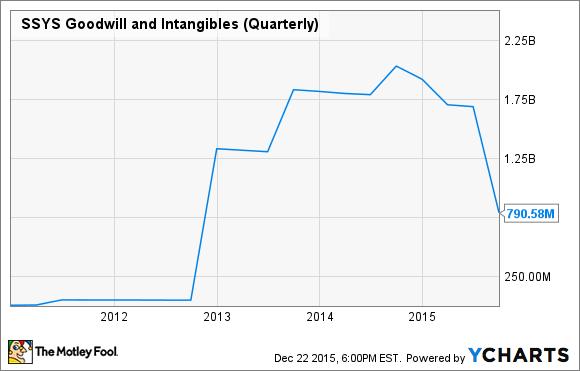 A near 60% writedown of its goodwill and intangible assets in 2015 signals that management wasn't confident it would achieve the necessary returns to justify the cost of these pricey deals. It also strongly suggests that management is pretty awful at allocating capital for shareholders.

Avi abruptly departs
3D Systems investors woke up to a surprise on Oct. 29, when the company's CEO of 12 years, Avi Reichental, abruptly announced his immediate resignation and that he wouldn't be sticking around to ensure a smooth transition. The press release noted it was a mutual agreement, but didn't elaborate further.

Reichental's departure comes at a challenging time for 3D Systems, when the company is trying to rein in the myriad of execution issues that's been plaguing its operations, caused by its hyper-aggressive acquisition strategy. Its steadily rising cash conversion cycle, which measures how many days it takes cash to run through the entire sales process -- from sitting in the bank, buying inventory, selling inventory, and collecting payment -- strongly suggests that management's been more focused on acquisitions instead of running its operations efficiently.

After all, the longer it takes for cash to run through the sales process, the less frequently -- and less efficiently -- said cash can be reinvested back into the business. 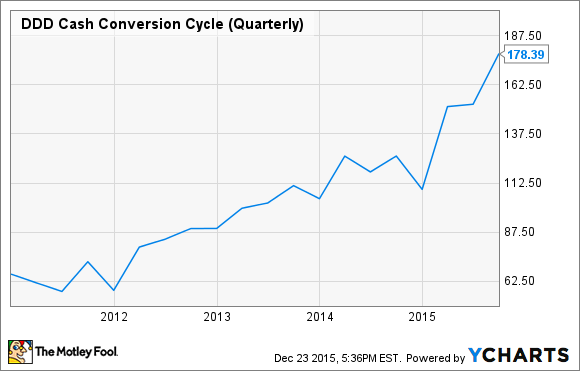 An executive management committee has been formed to find Reichental's replacement, which creates an opportunity to find a candidate that prides itself on execution and refinement. However, the committee hasn't made known its plans about the type of candidate it's looking for or how long it expects the search to take.

The rise of Carbon3D
Backed by serious venture capital funding, a start-up by the name of Cabon3D took the industry by storm in April when it announced a breakthrough 3D printing technology it developed -- called CLIP. It claims CLIP is orders of magnitude faster than leading 3D printing technologies on the market today, and was inspired by T-1000, the cyborg villain in the film Terminator 2, specifically around its ability to rise out of a pool of liquid and take shape. Ultimately, CLIP addresses many of the technological shortcomings that plagues 3D printing today, like speed and surface finish, in hopes it will increase overall adoption. If successful, it'll likely make legacy technologies offered by 3D Systems, Stratasys, and others, appear inferior.

A bold vision
HP's (HPQ 1.11%) made it known in late 2014 that it'll be entering the 3D printing space in late 2016 with a proprietary technology that leverages its decades of inkjet expertise. The tech giant named it Multi Jet Fusion and claims it's 10 times faster than the fastest selective laser sintering and extrusion-based 3D printers on the market at the time.

This year, investors learnt more about HP's vision for 3D printing, which could be viewed as both exciting and frightening, depending on whether you're asking a customer or competitor.

Essentially, HP's long-term goal is to create a step-change in 3D printing that drives the hundreds of thousands of potential enterprise customers that haven't already adopted 3D printing to do so. This entails creating a 3D printing technology platform that, over time, becomes faster, produces higher-quality parts, operates at a lower cost, and is highly predictable for engineers.

Undoubtedly, it's a bold vision to drive an order of magnitude increase in adoption. But if there's one company that has the resources, expertise, and distribution to flex its muscle over a $4 billion-a-year industry, HP is certainly a contender.

Looking ahead: wait for the dust to settle
There are two major storylines happening in the 3D printing industry today. They're on an unavoidable crash course with one another and will collide in the not-too-distant future.

One is how there's an existing base of 3D printing companies, many of which have been struggling with execution, casting serious doubts over their long-term investment merit. The other is how well-funded entrants will be introducing 3D printers over the next year or two claiming to be superior to today's offerings. As these stories collide, it's unclear whether the 3D printing leaders of today will remain on top tomorrow.

This isn't a big deal from a customer perspective who usually remains indifferent about what brand of 3D printer they own, but it's an extremely uncertain environment for an investor. In other words, it's probably worth waiting until the dust settles before jumping in.

Steve Heller owns shares of 3D Systems. The Motley Fool recommends 3D Systems and Stratasys. We Fools may not all hold the same opinions, but we all believe that considering a diverse range of insights makes us better investors. The Motley Fool has a disclosure policy.

Interested in 3D Printing Stocks and ETFs? Check Out the First 3D Printing ETF in the U.S.
395%