Worries about a possible year-over-year decline in iPhone sales fail to acknowledge the big picture.

Some investors are concerned Apple's (AAPL 3.19%) iPhone sales may be lower than the year-ago quarter when the company reports results for the final quarter of the calendar year, or its first fiscal quarter of 2016. With iPhones accounting for about 63% of revenue, a decline in iPhone sales would make revenue growth difficult, if not impossible. But as an Apple investor myself, I'm not concerned about a year-over-year decline.

Here's why investors should give little weight to a year-over-year decline in iPhone sales if it does occur.

The beginning of a decline?
Ahead of Apple's most recent quarterly earnings release, I explained why I would be watching its guidance. To sum up the article, Apple's guidance would provide a preview of its expectations for its most important quarter of the year, as well as indicate whether the company could outdo its monstrous first fiscal quarter of 2015.

So, how was Apple's guidance for the holiday quarter? The tech giant said it expected first-quarter revenue for fiscal 2016 to rise about 2.5% from the year-ago quarter. Not bad when the company is up against the year-over-year revenue growth achieved in Apple's first fiscal quarter of 2015 of 30%; when a company has more than $200 billion in annual revenue, this sort of growth in the year-ago quarter makes for an incredibly tough comparison.

But this guidance for year-over-year growth may not be convincing enough for some investors. Some analysts and investors may be concerned that either Apple will not live up to its guidance or that this relatively paltry growth signals the peak for its stock.

Rest easy
Fortunately, however, valuation has leveled the playing field. Apple's price-to-earnings ratio of 11.6 has basically baked in expectations for slowing revenue growth. Indeed, given the size of its repurchase program and considering management's excellent stewardship with this program so far, revenue could arguably decline from here and investors could still see earnings per share continue upward meaningfully enough to give merit to today's stock price.

Consider the impact of Apple's share repurchase program on its most recent quarter. Net profit was up 30.5% from the year-ago quarter and EPS was up 38%. While the company's higher gross margin in its most recent quarter drove some of this outsized gain in EPS, it was mostly due to its rapidly falling share count as it bought back its shares in droves. 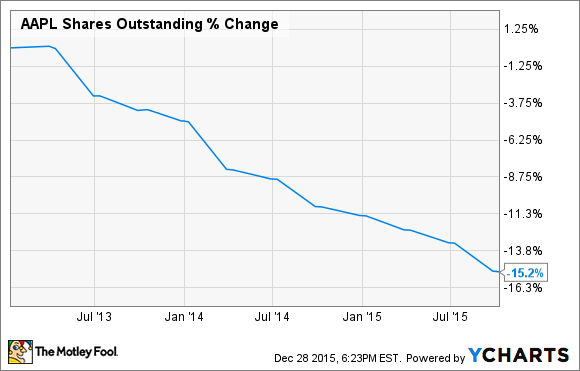 Furthermore, investors should keep in mind that this is just a single quarter. Each quarter should be put into perspective with a broader context and viewed as a single piece of a larger puzzle -- especially quarters for a company like Apple. In the near term, Apple's results are expected to be volatile. As a product company with an extremely focused lineup, there are going to be years where growth is difficult.

And for those who insist on taking a closer look, the best data investors have at the moment is the company's guidance, which suggests management still expects growth. So, all curious investors can do, for now, is wait.

At the end of the day, even if a slight decline in Apple's revenue begins to materialize in the near term, the stock's valuation, the company's pricing power, management's excellent capital stewardship, and Apple's track record of attracting and retaining a loyal customer base should soothe any worries for investors with the only sensible time horizon: the long term.