Overweighting my portfolio in this one stock turned out to be a dumb decision.

2015 should have been a breakout year for my personal portfolio. I hold sizable positions in Amazon and Netflix, each of which turned out to be among the best-performing stocks of the year, more than doubling in value. That performance is all the more remarkable compared to the returns of the S&P 500, which is currently on pace to show a loss for the year. 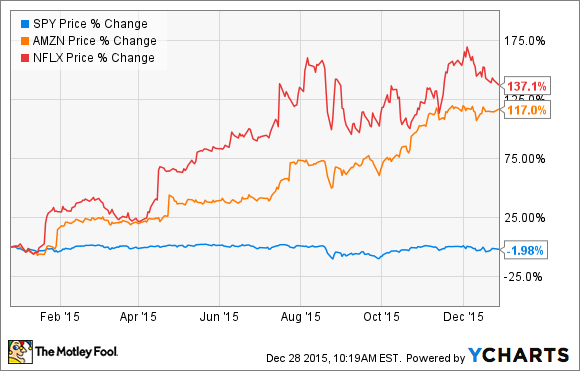 This huge outperformance should have allowed my portfolio to smash the returns of the index for the year. However, I ended up making a terrible portfolio allocation that winded up greatly muting my overall portfolio's performance.

What was that awful decision? I doubled down -- and then tripled down -- on a stock that I thought was going to be a home run investment, but it ended up turning into a strike-out. My dumb decision to continuously add to this huge loser turned out to be my biggest money regret of 2015.

So what stock single-handedly held my portfolio back in 2015? It was Kinder Morgan (KMI 0.54%), one of the largest energy infrastructure companies in the country.

What went wrong
The price of natural gas and oil declined all year long, causing investors in the space to sell nearly every stock that had any connection to the energy sector. That sell-off ended up hitting Kinder Morgan quite hard, but since I knew that the majority of the company's revenue was protected by take-or-pay contracts, I thought that its business would be insulated from the fall in energy prices.

So I added to my position in July, figuring that Kinder Morgan could easily weather the storm and would emerge stronger once commodity prices bounced back. I even went so far as to set up a bullish options position on the stock, despite the fact that it was already one of my largest holdings.

Well, commodity prices continued to decline as the year progressed, as did the company's share price, causing Kinder Morgan's dividend yield to soar. 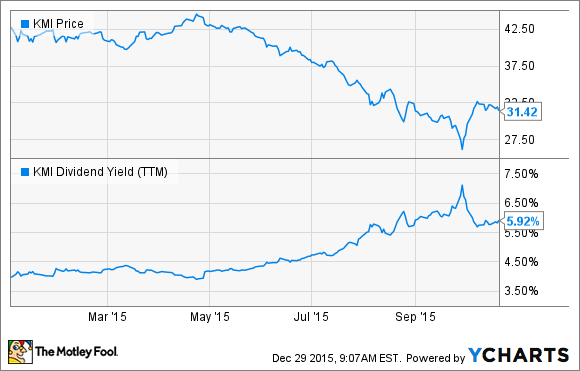 While the continued drop in the share price was causing my portfolio to show a loss, I wasn't overly concerned, as I still had confidence that Kinder Morgan's management team would deliver on its promise to grow its dividend by 10% per year until 2020. By holding on to what I had, I would be in a great position to profit once the share price reversed itself, and the truckload of dividends that I would receive along the way would help ease the temporary pain.

The bottom falls out
While I still felt good about Kinder Morgan's stock's long-term prospects, the market did not share my confidence. In October the stock really started to drop. 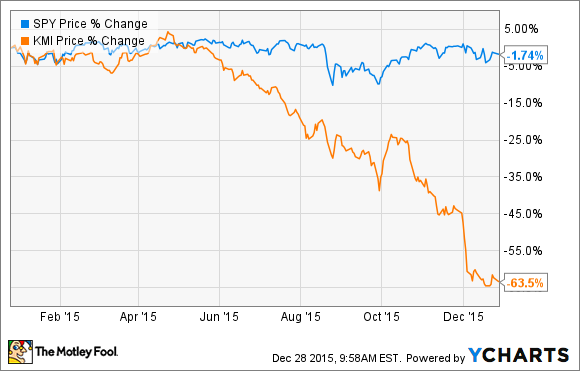 To make matters worse, in December, one of the major credit rating agencies put a negative outlook on the the company's debt and warned that a credit rating downgrade could be on the horizon. If that happened, the company's interest costs would spike, which would put a significant strain on the company's already weakened financials.

This created a big problem for the company. Since it pays out a large portion of its profits as dividends, it is highly reliant on raising capital in the stock and bond markets to fund its growth projects. This put the company between a rock and a hard place, as raising capital by issuing new shares would be horribly dilutive, and accessing the bond markets wasn't an option.

So what to do? Kinder Morgan's management team only had one choice: It had to cut its dividend payment to fund its growth. It ended up slashing its dividend payout by 75%.

What I did wrong
Normally, seeing a stock that I own tank by so much over the course of a year wouldn't be much of a concern to me, as I hold a very diversified portfolio that protects me whenever one of my companies eventually heads south. However, my awful decision to throw good money after bad and even use options to increase my already sizable exposure really took its toll, and my portfolio suffered the consequences. I would be much better off today if I had simply decided to hold on to what I had and watch the story unfold from there.

Lesson learned: No matter how bulletproof I think a business is, it's important to remember that things can always go wrong, especially in the short term. From now on, when a stock that I already own drops like crazy, I'll just just hang on to what I have.

I still remain bullish on Kinder Morgan's long-term prospects and have no plans to sell any of my shares, but adding shares at such a furious pace during the year was by far my biggest money regret.