Please ensure Javascript is enabled for purposes of website accessibility
Log In Help Join The Motley Fool
Free Article Join Over 1 Million Premium Members And Get More In-Depth Stock Guidance and Research
By Travis Hoium - Jan 2, 2016 at 9:33AM

As the residential solar industry has grown over the last few years, there have been a variety of beneficiaries outside of just solar installers. Solar panel manufacturers are the most visible companies, but makers of inverters and power optimizers are equally important for investors to understand in today's changing solar landscape.

Enphase Energy (ENPH 0.99%) and SolarEdge Technologies (SEDG 3.52%) are two of the most recent companies to emerge as important players in residential solar, and they've shown impressive growth in the industry so far. But which one should investors be more interested in?

What makes Enphase and SolarEdge different
Enphase Energy has built its business on microinverters, which turn the DC current from a solar panel into AC current at the panel level. Traditionally, larger string inverters were used, which combine the power from all of the solar panels in a rooftop system and turn it into AC current at once.

SolarEdge Technologies is built on solar power optimizer technology, which optimizes the DC power coming from each panel and sends that energy to a string inverter that turns DC current into AC current. Rather than replacing a component, like a microinverter does, an optimizer helps the system run more efficiently.

One reason both companies are gaining traction is that they allow module-level monitoring of solar panels, which in turn allows solar companies to know when there might be an issue and to shut down panels if necessary. In the U.S., electric codes are moving toward the ability to shut down individual panels that may be malfunctioning, so installers are putting a high value on this capability.

There's a lot of debate within the solar industry about whether optimizers or microinverters are best for residential and commercial solar, but it's clear that the market desires one or the other. That benefits both companies as the market grows.

Riding the solar growth wave
What has investors so excited about this segment of the solar market is the incredible growth potential for module-level power electronics. Enphase's growth has slowed a bit lately, but you can see that it's come from almost nowhere to over $100 million in quarterly revenue. SolarEdge's revenue growth is like a rocket right now. 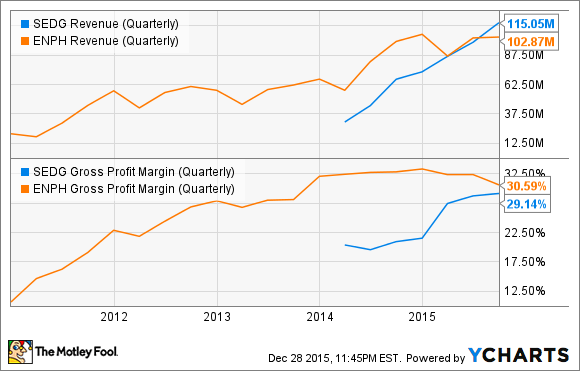 The success both Enphase and SolarEdge have had is really riding on residential solar growth, which was 69% in the third quarter, according to GTM Research, and the need for module-level power electronics. But it may not be as sustainable a business as you might think.

The better value in solar energy
Based on the numbers above, I'd say that SolarEdge Technologies is the better buy between the two companies today. The company is growing more quickly, it's more profitable, and its forward P/E ratio of 13.8 is much better than that of Enphase, which is expected to lose money in 2016.

Something to think about
While SolarEdge is the better of the two, in my opinion, that doesn't make it an easy buy for investors. SolarEdge is still just a middleman, reliant on contracts from large residential solar installers and subject to very little competition as it stands today. But now that it's established a market for power optimizers, we'll see larger players like ABB and SMA, which dominate the string inverter market, move into power optimizers. We could also see companies like SolarCity develop their own optimizers or microinverters, which could be attached during the manufacturing of solar panels.

SolarEdge's response is to try to expand its capabilities into monitoring, as depicted in the image above. But most of the largest solar installers already have their own monitoring systems, so again, expanding beyond components is an uphill battle. Enphase has made a similar strategic shift, trying to tie itself to energy storage with an "AC Battery." But again, that expansion is a stretch given the installer's role in choosing components and making them work together seamlessly. If you're SolarCity, why rely on SolarEdge or Enphase to do that for you?

It's worth keeping an eye on the developments at SolarEdge and Enphase going into 2016, but the best strategy for both may be to sell to a larger supplier or integrated solar manufacturer. Being a middleman hasn't worked out well in solar in the past, and I don't see it being a slam-dunk for investors this time around, either.

SolarEdge would be my pick of the two, but proceed with caution in the solar-component supply business.