Please ensure Javascript is enabled for purposes of website accessibility
Log In Help Join The Motley Fool
Free Article Join Over 1 Million Premium Members And Get More In-Depth Stock Guidance and Research
By Jay Jenkins – Jan 2, 2016 at 7:09AM

Three stocks that, for various reasons, could disappoint in 2016.

There's a lot that can go wrong for a bank stock in any given year. Bank performance is very closely tied to the economies they serve, and banks are subject to burdensome and expensive regulatory requirements. Their most fundamental business, accepting deposits and making loans, is inherently fraught with risk.

In considering everything that could go wrong, here are three bank stocks I think could end up being losers for investors in 2016.

U.S Bancorp: Too little upside, too much downside
Before diving into this first pick, let me say that US Bancorp (USB 0.34%) is, without a doubt, one of the strongest and best-run banks in the U.S. And that's its fundamental problem.

At the time of this writing, US Bancorp traded at 2.5 times its tangible book value. That's really expensive. The bank's larger competitors trade at considerably lower multiples, as do its more comparably sized regional-bank rivals.

With its valuation multiple already so high, it's hard to imagine a scenario where it moves any higher. That means the bank must grow its earnings per share in order to push the actual stock price higher.

The bank is already ridiculously efficient, with an efficiency ratio of 53.9% in the third quarter. There's not much room to improve there. Organic growth has a limited upside, simply because the U.S. economy, while improving, is still stuck in the slow growth, "new normal" of the past eight years.

Growth via acquisition will be hard, as well. Of the largest banks, BB&T is the only one to make any major waves via acquisition in 2015, and it's half the size of US Bancorp. Regulators will treat a major US Bancorp acquisition with much greater scrutiny. Realistically, any acquisitions will likely come around the margins, filling in gaps in the bank's footprint, rather than expanding it in any meaningful way.

The point is, US Bancorp's stock is just too good. There's not enough upside, while there's plenty of downside. Long term, I love this bank. However, for just the 12 months of 2016, I think US Bancorp's lofty valuation could return to Earth with just one slip up or mediocre quarter.

First Bancorp: When will the Puerto Rican economy turn itself around?
The primary problem for First Bancorp (FBP 1.25%) in 2016 will be the underlying Puerto Rican economy that it serves. The island nation has faced high unemployed, anemic growth, and serious leverage problems at even the highest levels of its government. These problems sent the stock down nearly 45% year to date in 2015, and down more than 98% during the past 10 years. In 2016, buying any turnaround story remains a tough sell.

Earlier this month, the government cut its revenue forecast by 5.2%. The island's population is shrinking, and for those residents who do remain, the unemployment rate remains stubbornly high. 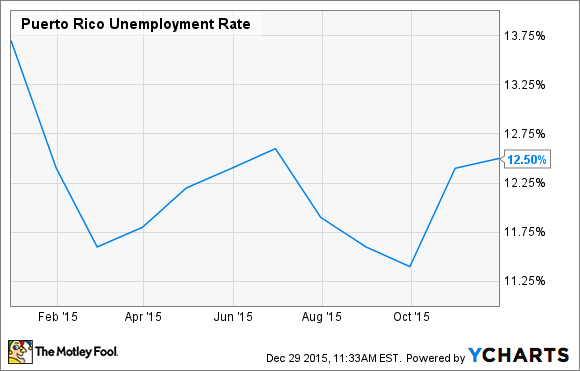 The problems are compounded by what many consider to be an unacceptable system of nepotism and corruption infecting the island's government. The problem is so serious, that members of the U.S. Congress have considered installing an independent group to oversee Puerto Rico's economic policy.

Bond investment fund Cumberland Advisors stated in a note on December 4th that the island's leadership has created "a plutocracy that incentivizes corruption, instead of a meritocracy incentivizing productivity and investment. Further questions arise leading to uncertainty rather than clarity."

For First Bancorp and its investors, this is hardly the environment to find a successful bank stock. The bank faces a diminishing and unemployed customer base, a shrinking economy, and sometimes corrupt policymakers. Any of these single factors would be a major headwind, and First Bancorp must face them all in 2016.

EverBank: The worst Texas ratio outside of Puerto Rico
The Texas ratio is a popular metric used to gauge a particular bank's credit risk. Banks are in the business of making loans, but a loan is only good if it's repaid.

When loans are not repaid, banks' profits can quickly turn to losses as capital dries up. The Texas ratio, which came to prominence during the oil and gas crisis in Texas during the 1980s, relates a bank's non-performing assets with its common equity capital, plus loan-loss reserves.

When analyzing the worst Texas ratios among large banks, the large Puerto Rican banks top the list for the reasons discussed above. Next in line is EverBank (NYSE: EVER), with a 33% ratio. That's about three times higher than the average of U.S. banks today.

EverBank is based in Jacksonville, Florida, but primarily operates through its online and mobile presence to customers across the U.S. That model should, in theory, provide for an efficient and low-cost banking model.

The reality of late has not matched up with that promise. The bank's efficiency ratio was more than 70% in the third quarter. A higher ratio implies less efficiency, and the bank's top-performing competitors report ratios in the low-to-mid 50% range.

The bank's stock took a serious dive after releasing its third-quarter earnings. It missed revenue expectations by almost 15%, earnings fell $0.02 short, and management failed to present any proactive plans to remedy the troubles. On a trailing 12-month basis, the bank's return on assets is just 0.5%, less than half the industry average.

Instead of grabbing the bull by the horns and tackling the bank's challenges head on, management instead chose to blame the "tough environment." Investors didn't buy it, and the stock is down more than 18% since.

The combination of the bank's high Texas ratio and management's lackluster response to its weak revenue, earnings, and other fundamentals make EverBank a strong candidate to potentially be among the worst bank stocks of 2016.

Jay Jenkins has no position in any stocks mentioned. The Motley Fool owns shares of and recommends Wells Fargo and l has the following options: short January 2016 $52 puts. The Motley Fool recommends Bank of America. We Fools may not all hold the same opinions, but we all believe that considering a diverse range of insights makes us better investors. The Motley Fool has a disclosure policy.