Among larger U.S. manufacturers, Sherwin-Williams (NYSE:SHW) is unusual for its single-mindedness. It makes paints and coatings, period. It sells most of them (80% by value) in the U.S., where it is the leading player in the $14 billion U.S. architectural paint market, with about 40% share. Architectural paints accounted for 83% of its nine-month revenue.

So, investors' dismay at its July 16 second-quarter report, which revealed sharp, currency-induced revenue declines at two of its divisions, is almost understandable, if not forgivable. It's not as though Sherwin-Williams hid its involvement in Latin America, or as though the sharp decline of the region's currencies or the euro was a secret. Third-quarter results seemed to reassure investors that currency effects could be contained, but the shares have not regained July's level. 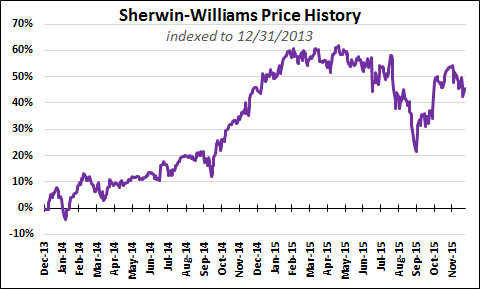 Sherwin-Williams owes its preeminent position in its business to a simple, surprisingly important insight. Since the 1970s, paint makers have served a narrow group of primary customers in the U.S., consisting of Home Depot, Lowe's, Wal-Mart, Sears, and the two big cooperatives, Ace and True Value. These customers are powerful relative to their suppliers, able to dictate prices, shelf space, etc. Furthermore, they undercut branded goods with in-house and budget product.

This behavior has reshaped the European paint industry, largely to manufacturers' detriment, and was on the way to doing the same here, until Sherwin-Williams had the idea of selling direct. With around 4,100 outlets -- mostly under the Sherwin-Williams name, but also Kwal, Color Wheel, Frazee, Parker, and, in Canada, General Paint -- direct sales accounted for 63.4% of Sherwin-Williams' nine month revenue. This strategy...

Sherwin-Williams had always maintained trade outlets, but in the 1980s, it realized the advantages of substantially increased numbers and a more consumer-friendly, service-oriented approach. The success of this innovation has led to imitation (and adoption of the idea in Europe), but none of them come close to Sherwin-Williams' store numbers. The company is further enhancing the concept with design consultation.

It still sells to big-box stores -- they contributed 14.5% of nine-month revenue. The margin on this revenue is currently about the same as that of the stores, and volumes are important: Paint manufacture requires scale and purchasing economies. The main raw materials are petrochemical resins and titanium dioxide. Pricing for both was favorable in 2015, and it will probably continue to be: TiO2 producers are attempting price increases, but they will be challenged to make them stick. The company reserves the "Sherwin-Williams" brand for itself, lending it exclusivity. The fact that the margin on sales to big-box customers is similar to store margin is not an indication of a flaw in the retailing strategy: Note that the stores sell a lot of painting equipment on which Sherwin-Williams captures only the retail margin.

Sherwin-Williams' global finishes group accounted for 16.7% of nine-month sales and 12.1% of pre-tax income. It is active worldwide, but predominantly in the Western Hemisphere. http://investors.sherwin-williams.com/pdf/annual-reports/2014-annual-report.pdfIt makes decorative and protective coatings for cars, aircraft, and other applications. It encounters a more competitive environment than Sherwin-Williams' U.S.-centric architectural paint, bumping up against AkzoNobel, DuPont, BASF, Bayer, and PPG, among many others. Revenue in 2015 has suffered from currency effects, not only from Latin America, but Europe as well.

The drastic decline of Latin American currencies shrank this business segment to 5.4% of nine-month revenue and has raised effective raw material prices, cutting pre-tax income by 42.9% compared to 2014. This division mimics the U.S. strategy, selling architectural paint through its own stores and third parties. Brazil is its most important market, but it has large operations in Mexico, Argentina, and Uruguay, too.

Although there is a large redecoration market, the biggest driver of architectural paint sales is new construction. Consequently, the outlook for this business in the U.S. is fairly good. While the housing recovery has been considerably less than overwhelming, nonresidential construction activity grew solidly in 2015, to within 0.6% of its 2008 peak, while residential construction seems likely to continue to improve, if not exactly boom: 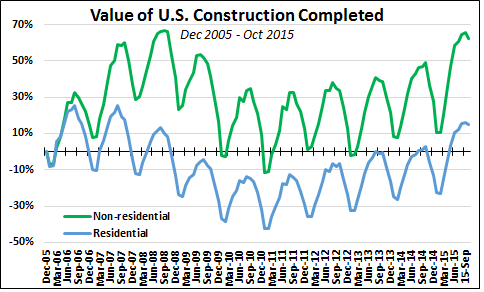 Sherwin-Williams should be able to increase U.S. architectural paint revenue and income solidly in 2016, although it may struggle to repeat the increases it managed in the first nine months of 2015. The Latin American businesses will continue to struggle, although Argentina and Uruguay may be exceptions, as the results of the recent elections in Argentina will probably be reflected in improved business confidence in both countries.

U.S. demand for cars and worldwide demand for aircraft should support the global finishes group, although slowdowns in marine and infrastructure construction and oil drilling will pull in the opposite direction. Currency will drag on revenue at least through H1 2016, and the segment's competitive environment is likely to get tougher. However, it was able to preserve its pre-tax margin, and it is unlikely that it will experience much price pressure: Competition on service and innovation is more typical of the sector. Given the predominance of the U.S. and automotive in this division's mix, 2016 pre-tax income will probably decline less than the 6.7% seen in the first nine months.

All of this suggests that in 2016, net income can rise at rates similar to this year's. Sherwin-Williams expects 2015 EPS to come in at $10.75 to $11.00. That puts its current valuation at 23.8 times the upper end of its forecast, which is not cheap, either relative to its own valuation history or to that of its manufacturing peers. If earnings grow at a comparable rate in 2016, it is trading around 20 times forward earnings -- not exorbitant by current standards, but hardly a bargain, particularly given the company's leverage: Shareholder's equity is only 16% of its balance sheet total. Sherwin-Williams has an enviable, 25-year record of increasing its dividend: 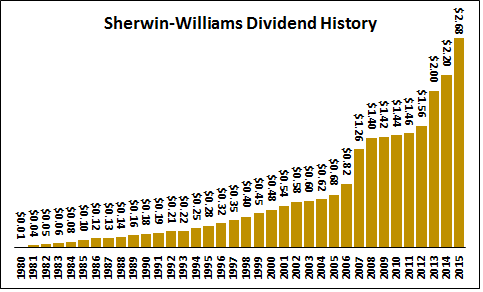 However, it is yielding only 1% at present, which does not provide much share price support. Investors can probably look forward to an opportunity to buy Sherwin-Williams at lower prices.

Sherwin-Williams: Will This Paint Manufacturer Be Great in 2016? @themotleyfool #stocks $SHW Next Article
Current