There's been a lot of news about the aluminum giant this year. Here are a few of the best headlines.

Alcoa's (AA) long and storied history is about to be split in two. And all of the company's best headlines in 2015 revolve around that fact.

We're breaking up
This headline was probably the biggest news of 2015 for the aluminum maker: "Alcoa to Separate into Two Industry-Leading Public Companies, Completing Successful Multi-Year Transformation." Now, to be fair, this is big news, but you could put a positive or negative spin on it. For example, if you like the idea of owning a vertically integrated aluminum company, you'd probably hate the notion of Alcoa's pending separation.

No matter how you cut it, the breakup was the biggest news of 2015. Image source: Alcoa.

That said, Alcoa has been working hard to trim the fat at its so-called upstream business, which makes aluminum, while growing its value-add business, which makes stuff with the lightweight metal, like airplane parts. Creating two distinct entities will allow the markets to value each based on their own merits and could unlock value for shareholders over the near term. Indeed, the legacy upstream Business, which is set to retain the Alcoa name, has been blamed for obscuring the positive things happening in the growing value-add segment.

So, like it or not, this is an important headline. But it's also the set up for some other headlines.

Finish one deal, ink another
So the first good headline of the year was: "Alcoa Completes Acquisition of TITAL." The deal for this privately held titanium and aluminum aerospace parts producer was agreed to in December 2014. It was completed just three months or so later on March 3, a quick turnaround. The deal has a couple of important implications.

First, it expands Alcoa's position in structural jet engine and airframe parts. That's a key focus for the company's value-add business. It also increases the company's presence in Europe, where TITAL had working relationships with key aerospace companies like Airbus and Rolls-Royce. It's not that Alcoa didn't already have relationships with these companies, but the addition of TITAL strengthened its industry position. And, lastly, it added titanium to the mix -- this side of TITAL's business is expected to grow some 70% over the next five years. All in, this was a good deal for Alcoa's value-add business. 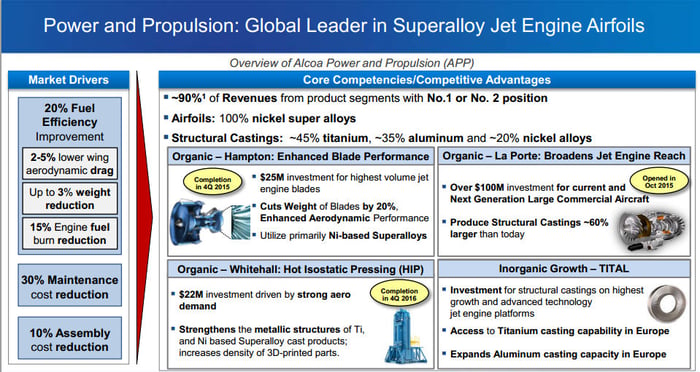 Some of Alcoa's get engine prowess. Image source: Alcoa.

The next good headline of the year was: "Alcoa to Acquire RTI International Metals, Boosting Value-Add, Multi-Material Aerospace Portfolio." This deal, which was announced just six days after the TITAL deal closed, was made for many of the same reasons. Most notably, it augments Alcoa's aerospace division and adds even more exposure to titanium. And this is a pretty big deal, if Alcoa had owned RTI throughout all of 2014, its aerospace revenues would have been 13% higher. So, another good deal for the growing value-add business.

The ends justify the means
The real story here, however, is that these two deals (and many more made in recent years) were ones that helped lead to the year's biggest headline out of Alcoa -- the breakup. So the TITAL and RTI deals were good headlines in and of themselves, but it's what they helped lead to that really catches the attention. And, as icing on the cake, or perhaps a vindication of its corporate direction, in mid-December Alcoa announced a $2.5 billion supply deal with Boeing (BA 2.01%) that highlights its solid position in the aerospace industry.

This deal builds on an agreement inked in 2014 for aluminum, adding titanium parts to the mix. Notably TITAL and RTI grew Alcoa's titanium business. In other words, you can already see the direct impact these moves have had. Alcoa will be supplying Boeing with parts for all of its airplanes, but will be the sole provider of seat track assemblies for the 787 family of aircraft. It's a notable contract win for Alcoa.

But don't think this is the end of the deal making; look for Alcoa to make more acquisitions like TITAL and RTI as it continues to build the value-add business -- as part of Alcoa or as a stand-alone entity. Which means there's probably more good news to come in 2016.