Volkswagen clearly makes any list of bad CEO moves in 2015 but the two execs joining that list may surprise you.

Martin Winterkorn -- Volkswagen
What were they thinking?

In September, the U.S. Environmental Protection Agency announced that Volkswagen's diesel cars had software onboard designed to dupe regulators into thinking the cars were cleaner than they actually were. The full extent of the scandal is still unknown, but it goes back years and has impacted a lot of the company's vehicles.

Winterkorn stepped down almost immediately after the scandal broke but his real failure was, at best, not being effective in overseeing VW's diesel development and, at worst, approving the software that duped regulators. Either way, it's a massive failure that will have lasting consequences for VW. Sales have already plunged in the U.S., according to recent sales figures, and the damage to the company's reputation may never be undone.

Nick Woodman -- GoPro
GoPro has been on a meteoric rise since it was started in 2002 and Nick Woodman has been the mastermind behind the company's success. But 2015 included his most visible mistake introducing the Hero4 Session for $399 to a market that seemed wholly unimpressed by the product.

Woodman was forced to lower the price of the Hero4 Session to $299 shortly after launch and has recently lowered it again to $199. The fiasco caused investors to question whether GoPro had the pricing power we thought and also called into question the company's growth. As you can see, shares didn't respond well either. 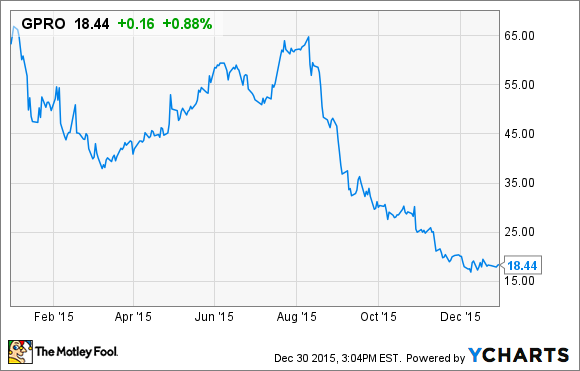 I think Woodman and GoPro can recover from the fiasco that was 2015, but it'll take great execution in 2016. The GoPro drone Karma is expected to launch sometime next year and that could be a billion dollar business if conditions play out right. And the Hero5 line will also be launched, which gives the company an opportunity to right some of the mistakes of 2015.

It'll take time to earn back investors' trust, but that's what happens when you have a disastrous launch like the Hero4 Session.

Harold Hamm -- Continental Resources
With Harold Hamm I'm going to go back to a move he actually made in late 2014, but proved to be disastrous in 2015.

On Wednesday, Nov. 5, 2014, Hamm announced that the company had sold all crude oil hedges through the end of 2016, predicting that oil prices would soon climb. OPEC was largely blamed for the decline in oil in 2014 and Hamm called the cartel a "toothless tiger" and said:

We view the recent downdraft in oil prices as unsustainable given the lack of fundamental change in supply and demand.

Since that day oil prices have fallen over 50% and Continental Resources has reported a net loss of $214 million so far in 2015. We don't know exactly how big the potential loss was in selling hedges rather than holding onto them, but when you consider that oil was near $80 per barrel when hedges were sold and they led to a $433 million gain at the time we can assume the opportunity cost is easily over $400 million.

Maybe OPEC isn't the toothless tiger Hamm thought it was and if he had taken the threat of falling oil prices more seriously he could have saved his company hundreds of millions of dollars.